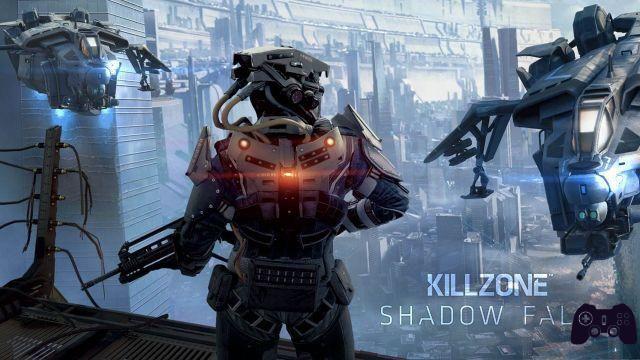 The Killzone saga is certainly not famous for having a complex and well-narrated plot, but we certainly cannot fail to admit the great charm that the war between the Helgast and the Vekta has always aroused in all its videogame incarnations. This Killzone: Shadow Fall, launch title ed PS4 exclusive, is no exception and definitely starts with all the credentials to amaze and excite the gamer.

History is written by the winners

After the destruction of Helgan, the Vekta hosted holocaust survivors on their planet, but the wall that divided them remained between the two civilizations. While the Vekta live in rich and bright cities, the remaining Helgan are forced beyond a barrier to live in poverty and latent hatred. This premise elevates the canonical struggle between good and evil to a much more interesting and raw struggle between winners and losers. For the first time, in fact, we will find ourselves not rooting for one of the two factions, but we would like to follow the deeds of our protagonist until the end to discover all the background of the story. Story that, unfortunately, starts in an intelligent and compelling way, but that in the second half lets itself go to confusion until an open and inconclusive ending that hopefully can be filled by a future DLC (for the good taste of the narrative). Within this story we will play Lucas Kellan, Shadow Marshall trained in any type of action, and we will follow him in a story that will see him analyze the good and evil present in each of the two factions, finally choosing which side it is right to be on. These moral dilemmas could have raised the narrative of Killzone: Shadow Fall, but even in this case we notice a well-managed and compelling first part with a protagonist who realizes that he has not always acted right, and a second part in which our "hero" seems to move almost at random until the end of the story. A missed opportunity for the Guerrilla Games guys to debut on PS4 in style. In any case, the campaign of this new episode of Killzone can be completed in about 8-10 hours (depending on your abilities), a discrete time for the genre to which it belongs.


The banality of evil

The gameplay of Killzone: Shadow Fall It doesn't really stand out from most of the console shooters, but we can definitely see some good ideas. The main innovation is undoubtedly the OWL, which is a radio-controlled drone by our protagonist that will allow him to carry out fundamental actions in the continuation of the plot. These actions, selectable via the touchpad on the PS4 controller, are summarized as follows: create a barrier through which we can shoot enemies, but not suffer their hits; a rope / grapple that will allow us to get to certain places, but that most of the time the player will be forced to use in scripted moments making everything little different from a Quick Time Event (almost a Slow Time Event to be honest); an assault by the drone that will distract the enemies and fire at them and, finally, a stun shot that will leave the enemies confused and deprive them of their, eventual, shield. The drone proves to be an interesting addition as it allows you to organize your own strategy during the clashes and makes everything more dynamic than in the past. Clashes that, despite the amount of enemies in some areas, at "normal" difficulty highlight how the artificial intelligence of the enemies does not go beyond "taking cover" and "getting around the enemy". The thing changes, of course, when you play on a "difficult" level, in which the enemies plan the attacks and slowly approach the player. IA therefore, certainly above the average.

The beauty of the Next-Gen

Killzone: Shadow Fall offers glimpses that really take your breath away and leave you speechless for their beauty and brightness. The settings are well characterized and we will often find ourselves amazed by the difference in colors between one area and another, which helps to create different atmospheres and to distinguish the different worlds in which the Helgan and Vekta live. Unfortunately, it's not all plain sailing, i polygonal models of the faces of the characters, in fact, are not always treated and, especially with some secondary characters, they are definitely ugly to see. Another negative thing we wouldn't like to find in this new generation of gaming is poor interaction with the environment. In this game, as in many others, unfortunately, the interaction with the environment is really reduced to the bone and throwing a grenade into a room will only break a few vases and any window panes. Furthermore, if you shoot against a wall, after a few shots the holes of the previous bullets will magically disappear. These technical deficits could be easily avoided and undermine a production that, otherwise, would have been of excellent quality. We hope that future next gen titles can be more accurate from these points of view. As for the sound sector, there are no particular notes to make. The music is of good quality (with a pleasant main theme), but it does not surprise particularly and, at a certain point, you hardly notice it (which is definitely not very positive); as for the dubbing it must be said that a bad job has not been done (the protagonist is voiced by Maurizio Merluzzo), but sometimes a certain expressiveness in the characters is lacking and it is impossible not to notice. As a last note on the audio sector it should be noted that sometimes it happens to have to read the subtitles to understand what the characters are saying, as the music dominates everything else..

Like all the shooters in circulation too Killzone: Shadow Fall has a multiplayer component. The types are good or bad the usual, but the absence of a level evolution (As in Call of Duty for example) and the introduction of a challenge list to mark the progression of the character (distinguishable, of course, by class) succeeds to differentiate it from the crowd. The classes present are always the same (Sniper, Support and Assault), but, unlike most of the shooters, at the beginning there are no unlockable elements as every weapon and skill is already available right away. The primary goal of a Killzone: Shadow Fall online player is, therefore, to specialize in a class to overcome its challenges and enhance their skills and weapons. It follows that if you are not able to use the sniper rifle (for example) you are forced to change class or to train until you become really good with that class. This new approach makes the Guerrilla Games title a third method of playing online shooters, thus distinguishing itself from the various Call of Duty and Battlefield. It must also be said that team play is essential to win online games, as there is only one spawn point at the start of the game and only the "Support" class has the possibility of introducing new ones. This makes everything more tactical and forces players to work together to take the victory home. As for the technical level of this online mode it must be said that it is certainly the best available on the square and leaves many times amazed by the general glance. Too bad, however, that the promised 60 fps are not always stable and that sometimes you can notice some drop in the most excited situations. Finally, there are some connection problems that sometimes expel us from games and / or do not give us the right score. Some flaws that, however, do not undermine the multiplayer mode which proves to be more than satisfactory.

Verdict 7/10 A good start, but we expect much more from this "next gen"! Comment Killzone: Shadow Fall is a good launch title that suggests that you can have in your hands, as soon as possible, titles with a devastating visual appearance. A plot that is only initially interesting and some graphic bugs, however, fail to bring this title to something more than "a good game" and it certainly will not prove to be a killer application capable of pushing a gamer to switch to the next gen just to play it. The good ideas are there, the graphics sector is (in some points) excellent and the multiplayer is engaging and manages to entertain for several hours. We hope that with the next, inevitable episode, we will be able to eliminate the problems present in this title and therefore raise the Killzone saga a little higher. Pros and cons ✓ Splendid technical compartment ...
✓ The Owl is a great introduction
✓ History with interesting potential
✓ Atypical multiplayer x ... with notable drops in character modeling
x There is almost no interaction with the environment
x Narrative of the second half of the game inconclusive
Do you want to be a video game expert and know all the tricks, guides and reviews for your video games ? Holygamerz.com is a group of video game fanatics who want to inform you about the best tricks, guides and tips. We offer you the best information to be a reference in gaming, so here you can find guides, tricks, secrets and tips so you can enjoy your games to the fullest. Are you ready to get all the achievements of that game that you resist so much? Enter now and enjoy your favorite video game to the fullest!
Kingdom Come: Deliverance review ❯

Go Vacation Review - A vacation in the past