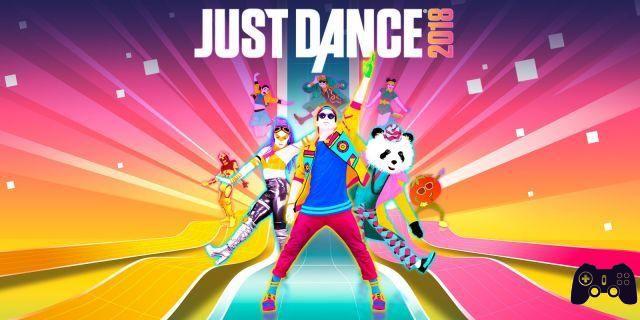 Punctual as taxes, once again this year we are back on track with Just Dance 2018.

For nine years the joy of casual dancers, the Just Dance series seems relentless, and punctually at the end of last October it offered 40 unreleased songs to all owners of Nintendo Switch, Wii U, Wii, PlayStation 4, PlayStation 3, Xbox One and Xbox 360. And similarly we too, are ready to tell you about the Nintendo Switch version, and everything new in the 2018 edition of the Ubisoft home dance game.

Nine years and not hear them

The strength of Just Dance has always been in the simplicity of its gameplay, which also allows those who have never danced to follow the movements of the silhouettes on the screen and repeat the deeds with their right arm. Then there are those who really work and move the whole body, and opportunities to do so, in this Just Dance 2018, there are galore. Let's find out as usual starting from a very varied track list, and which, as usual, draws on the successes of the current year, from the inevitable Slowly (Luis Fonsi & Daddy Yankee), a Kissing Strangers (DNCE ft Nicki Minaj), from How Far I'll Go (from Oceania) a Swish Swish (Kathy Perry ft Nicki Minaj), passing through timeless classics such as Another One Bites the dust (Queen),  Blue (FROM BA DEE) e Daddy cool (Groove Century). If these forty songs do not completely convince you, Ubisoft also proposes the Unlimited subscription which, as in the 2017 edition, offers about 300 songs from the other eight chapters, free for the first ninety days and then with a monthly (or annual) subscription. In short, a library of about three hundred and fifty choreographies (if we include those unlockable by playing) is impossible to find on any other similar title, if we also count the pecuniary of rivals currently for the Ubisoft brand, the French dance floor is the only place to demonstrate one's skills.

The biggest novelty introduced in the Nintendo Switch version, which somehow tries to compensate for the absence of the camera, is the full support of the Joycons and the HD Rumble. Not just with a mode completely dedicated to Nintendo controllers, called Double Rumble and that with ad hoc songs, drags the player into different jobs and environments, such as the chef, the sportsman or the musician, but also vibrating in time during the 40 songs of the 2018 edition. A further help on the perfect execution of the movement, and of which after about ten hours of play we can no longer do without. Unfortunately this feature is obviously not usable in the Unlimited songs given their streaming nature, or if you play with smartphones.

In addition to supporting six-player local multiplayer (or with joycons or smartphones), the World Dance Floor has also been polished and improved compared to the 2017 edition. We will once again be able to challenge all the dancers in the world, in events that follow one another between simple dances, three-round tournaments or the brand new boss battles, which will allow us to unlock exclusive avatars with stars in the teeth. Also renewed the Happy Hour mode, where for a certain amount of time, you will earn more Mojo points to be used later to access more content. Unfortunately, in the Nintendo Switch version it is not possible to save videos or images, and also the Ubisoft rewards dedicated to the Ubisoft brands (avatars and themes) are not yet active.


Obviously, the hybrid nature of Nintendo Switch allows you to play wherever you want, taking the dance floor even outside the house, as long as you want to dance at the mall or in a park or, more likely, at a friend's house without a console.

Like every year we close with the other strong point of the Ubisoft brand: the choreographies that also in 2018 are a riot of colors and costumes ranging from the return of characters like Hatsune Miku and the Panda now symbol of the series, passing from Moana from Oceania to Twerking Reindeer from Make it Jingle. Just Dance 2018 is as usual completely in Spanish, therefore suitable for an audience of players of all ages also thanks to the new Kids mode, in which the score is not calculated. Whether you've been a dancer for nine years or are approaching the series now, Just Dance remains one of the best party games to choose from this year as well.

Verdict 8.5 / 10 But have we forgotten UBICLUB on Nintendo Switch? Comment There is not much more to say about Just Dance 2018, Ubisoft packs for the ninth year in a row one of the funniest party games for evenings with friends, with a choice of 350 different songs. Not only that, if you are in possession of Nintendo Switch, the 2018 edition will conquer you immediately, thanks to the use of the HD Rumble to further increase the immersion of what happens on the screen. The same doubts of last year remain: in a brand that is increasingly focused on the online sector and on the possibility of using your smartphone to play, how long will the old gen castrated versions last? Will it really be enough to reduce the price to continue selling them? Or is it time to abandon ship and focus on the current platforms? Pros and cons ✓ 350 songs available
✓ HD Rumble well implemented
✓ World Dance Floor improved
✓ Suitable for everyone x Old gen versions still castrated

Do you want to be a video game expert and know all the tricks, guides and reviews for your video games ? Holygamerz.com is a group of video game fanatics who want to inform you about the best tricks, guides and tips. We offer you the best information to be a reference in gaming, so here you can find guides, tricks, secrets and tips so you can enjoy your games to the fullest. Are you ready to get all the achievements of that game that you resist so much? Enter now and enjoy your favorite video game to the fullest!
Moons of Madness review, the rece-guide for PS4 ❯

DOOM Eternal Review: The Ancient Gods Part 1 is one hell of a review