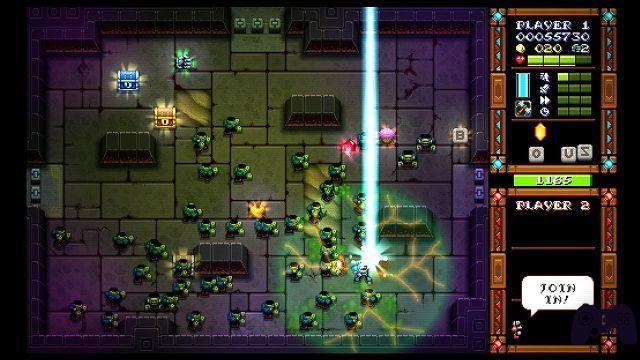 Iron Fisticle opens with the scene of two knights, charged with guarding the foodstuffs needed for a banquet, who fall asleep at work and have all the food blown under their noses by a demon. The introduction is obviously a mere pretext, and our task will be to impersonate one of the two knights who, throwing himself headlong into the dimensional vortex created by the demon, will have to recover the stolen food. The gameplay is a giveaway to classic titles such as Gauntlet, Robotron and Smash TV, revisited with modern eyes through the filter of the genre Twin Stick Shooter. We will find ourselves inside the rooms of a mysterious dungeon, committed to surviving massive waves of enemies, collect power ups and make our way to the boss of the floor we are in. Despite being a PC game, tackling Iron Fisticle using a mouse and keyboard control method is certainly not the optimal solution. The recommended input system is clearly a controller, through which we can use the left stick to move and the right to launch our attacks in various directions. The backbone keys complete the picture, used respectively to perform a shot, useful for escaping in extremis encirclement or to reach power ups, and a special attack (with a limited number of uses) able to vaporize the enemies present in a certain radius around. to our character. The standard attack at our disposal will be the throwing an ax. A relatively powerful attack, but initially rather slow and unsuitable to face all the obstacles present in our path. Fortunately, with a rather high frequency, the game will grant secondary weapons and power ups, which will help us decisively in our enterprise. The secondary weapons will replace our main attack for a short time and will be of the most disparate types: shower of arrows, multiple throwing of knives, throwing hammers, grenades, flamethrowers and so on. Each secondary attack will have very specific characteristics and it will be essential to learn how to use it at its best. For example, hammers are able to travel long distances and bounce off walls, knives have limited power but a wide range, the flamethrower will be extremely powerful but will only be able to hit the closest enemies, and so on. . The game will provide these secondary weapons in a manner completely random, and there is no way for the user to store them for later use, so you will need to learn how to use the skills of each weapon and adapt to any situation with the weapon you have at the moment. The other power ups that we can use are essentially of two types: consumables, which allow us to recover energy, armor or ammunition for the special attack, and others that will modify statistics such as our speed, the frequency of our attacks and their power.

While this progression system allows us to increase our skills as we overcome waves of enemies and dungeon rooms, the difficulty of the game increases exponentially faster: after the first rooms the number of enemies will be really exaggerated; in the same way, new types of particularly mangy and resistant enemies will appear, causing sooner or later our inevitable defeat. At each game over, all the modifiers to our statistics obtained with the bonuses will be reset, bringing us back to the starting conditions, or almost. In fact, during the game we will also meet shop rooms, where we can spend the accumulated loot by eliminating enemies to acquire permanent upgrades. Similarly, in an incredibly simple and elegant way, the score obtained in each game corresponds to a certain amount of experience that our knight will receive. As the experience grows, new weapons will be made available in random drops, which will allow us to better face the challenges of subsequent games. So, game after game, we will always be able to get a little further, until we get closer to the boss of the floor and then, finally, to the final boss. In Iron Fisticle, defeat will be your constant companion, but thanks to this nice system of progression, no game over will be perceived as an end in itself, but it will be a further step towards the final goal, unleashing the “yet another game” mechanism typical of many arcade games. At the beginning we talked about two knights. Well, Iron Fisticle can be tackled entirely in Cooperative mode by two players, albeit unfortunately only locally. The online rankings complete the picture, in which you can compare your score with players from all over the world, an absolutely welcome addition.

You don't get out of the 90s alive

If Iron Fisticle is intended as a tribute to a certain genre of arcade game of the past, we can find confirmation of this also in the audiovisual realization of the title. With an overhead view, the game is made entirely two-dimensional, with an impressive pixel art and a style that recalls the titles of the first half of the 90s. Among the graphic options, the possibility to activate or deactivate the scanlines stands out. In the first case we will have a look that perfectly recalls that of the CRT monitors of the old cabinets, while in the second we will sacrifice the nostalgia effect for greater overall graphic cleanliness. In both cases, the look is still refined, pleasant and perfect to break the heart of many nostalgic gamers. In the same way the music recalls those of the games of the same era, with pale chiptunes, loops with winning and immediately memorable hooks. If we were to find a fault in them, we should undoubtedly indicate their repetitiveness: they are present in the game very few musical pieces, and within a handful of games you can hear them all. Too bad, because more variety would have helped create a less tiring sound in the long run.


Verdict 8/10 I've got balls of iron! Comment Iron Fisticle is a title that promises to pay homage to a certain type of games, and completely hits the target. Starting from an audiovisual sector that fits perfectly and perfectly old school, up to an immediate and addictive gameplay, Iron Fisticle is a wet dream for any self-respecting nostalgic retro-gamer. We report the high level of difficulty, in the opinion of the writer well balanced by a brilliant progression system in its simplicity, which could however scare some less experienced players. The addition of cooperative mode is excellent, even if only local. With the addition of the online Iron Fisticle he really could have had that extra something that would have made him shine. Maybe next time. Pros and cons ✓ Effectively evokes the nostalgia effect
✓ Well studied progression
✓ It is addictive x Why the cooperative only locally?
x The music would have benefited from a greater variety
x Some may not like the difficulty

Do you want to be a video game expert and know all the tricks, guides and reviews for your video games ? Holygamerz.com is a group of video game fanatics who want to inform you about the best tricks, guides and tips. We offer you the best information to be a reference in gaming, so here you can find guides, tricks, secrets and tips so you can enjoy your games to the fullest. Are you ready to get all the achievements of that game that you resist so much? Enter now and enjoy your favorite video game to the fullest!
News Batman, Guardians of the Galaxy and Telltale Minecraft coming to Switch ❯