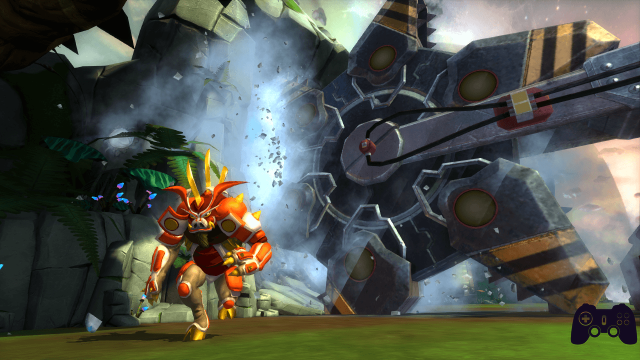 Where the protagonist of The Alliance was the player himself, in The Vanished Kingdom the developers Magenta Software (known to the public for some cinematic tie-in like the Stuart game Little 2 or for the Buzz! Junior series) have decided to focus on a more traditional narrative artifice: the protagonist of the game is Hiro, a boy who is entrusted with the task of investigating the causes that are pushing the Invizimals to leave their world and move to Earth, investigating precisely in the natural habitat of the creaturesThe narrow narrative plot will develop through dialogues inserted at the beginning of each level, sporadically interspersed with some cutscene, presenting the player a fairly banal plot whose "twists" are easily predictable well in advance.

The Kingdom (with the challenge rate) Gone

From the point of view of the gameplay, the story mode of The Vanished Kingdom is presented as a three-dimensional platformer in which phases alternate in which you have to solve puzzles to continue in pieces in which you have to deal with the steel Invizimals, the enemies present in the game. The first flaw that appears under the eyes of those who play is the choice to implement a fixed camera, which forces the player to move Hiro only "forward" and hinders (almost to prevent) the exploration of the levels and the ability to go back to collect the collectibles left on the street. The other big flaw of the production is the absolute absence of challenge, from all points of view: to proceed through the levels it is necessary to solve puzzles by taking advantage of Hiro's ability to transform into different Invizimals, each with its own peculiar characteristics. However, these appear for the most part as extremely linear, requiring the use of one or at most two different creatures to be completed and re-proposing themselves in the course of the adventure as very similar, if not identical, to each other. Whenever you are faced with a wall to be knocked down it is in fact obvious the need to resort to the charge of Minotaur, while if you are faced with gears to collect or to operate the choice always falls on the panda Xiong Mao, and in the sections underwater we always rely on Tigershark. In addition, the choice of the creature to use (which could add a little spice to the challenge) is extremely simplified by the possibility of doing it "automatically" by positioning yourself in some points clearly indicated with yellow stars and pressing the triangle button, causing the transformation of Hiro into the right Invizimal at the right time. Extremely imprecise management of collisions closes this bleak picture, which involves problems of a graphic nature such as interpenetration of polygons and invisible obstacles that arise in our way, further ruining an experience from the platform point of view already not particularly brilliant. Also noteworthy are quite conspicuous slowdowns when destroying boxes and other objects containing collectibles, which together with a minimal and bare graphic they pack a technically not very successful product.

The pleasure of holding hands

The puzzle platforming phases described above alternate with pieces of play in which Hiro, in the form of any of the Invizimals in which he can change (this time it is left to the player carte blanche) is grappling with the steel Invizimals . Pressing the square key multiple times, regardless of the creature selected, will perform a basic attack combo. This combination that is the same for all must be accompanied by two types of attacks: heavy attacks, capable of inflicting more damage, which can be performed by pressing the triangle button, and a special move that can be used thanks to the circle button only after filling the appropriate bar. hitting enemies with the other two types of moves. For each creature it is possible to unlock a certain number of heavy attacks and special moves (although it is possible to use only one of each type at a time) thanks to the collectible Z Orbs that act as currency within the game and are collectable in each level. This aspect of the experience does not suffer from particular technical problems and is successful, even if the Invizimals of steel will never make the player's life particularly difficult until the end of the experience. Unfortunately, the same cannot be said about the management of checkpoints, which in addition to being positioned very far from each other reset in the event of death all the "purchases" and modifications of the attack moves of the creatures and "take away" from the player the collectibles collected after saving, a choice that makes the adventure definitely more frustrating to play.

To save the game from a rejection without appeal, the multiplayer mode intervenes, resumed both in the mechanics and in the graphics from the one present in The Alliance and able to convince us again even on displays larger than 5 inches. The additions in this version for Playstation 3 of the arena concern the possibility of importing your own creatures (in addition to sparks and vectors) entitled Playstation Vita, and the ability to fight with and against three other players, either locally by connecting multiple Dualshocks or online. Here, too, there is the possibility to evolve your creatures and to customize attacks and statistics to adapt them to your fighting style.

Verdict 5.5 / 10 Luckily the kingdom has disappeared Comment If the chapter for Playstation Vita appeared as an overall successful title and advisable to a more or less varied audience, Invizimals: The disappeared kingdom results in its main component a product afflicted by problems that they lower the final rating. To "put a patch" intervenes the successful multiplayer mode that expands the good things seen in The Alliance with the possibility of playing locally with three other friends. Pros and cons ✓ The arena mode is the same as in The Alliance
✓ Cross Play and possibility to import Invizimals from PS Vita x Extremely easy
x Frustrating check points and camera to review
x Several technical problems
x Graphically bare, Invizimals aside

Do you want to be a video game expert and know all the tricks, guides and reviews for your video games ? Holygamerz.com is a group of video game fanatics who want to inform you about the best tricks, guides and tips. We offer you the best information to be a reference in gaming, so here you can find guides, tricks, secrets and tips so you can enjoy your games to the fullest. Are you ready to get all the achievements of that game that you resist so much? Enter now and enjoy your favorite video game to the fullest!
Guide Complete guide to Zenkichi [Wolf] - Persona 5 Strikers ❯

Batman: The Enemy Within - Episode 1: The Enigma review

Shantae and the Pirate's Curse review

Add a comment from Invizimals Review: The Vanished Kingdom