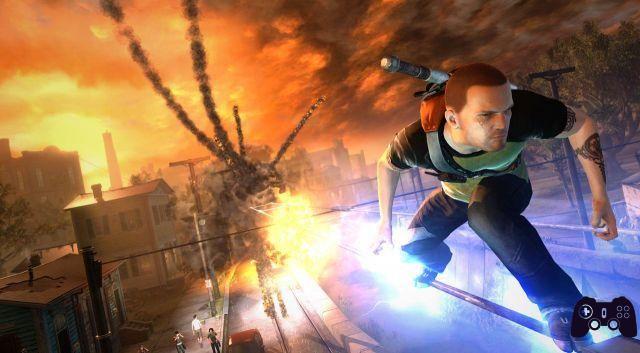 Sucker Punch tries again and tries to show that not all sequels manage to get worse than the first chapter (did anyone say Sly 2?). Taking everything good about inFAMOUS to a new level, the house of Bellevue seeks to create the best exclusive PS3 on the market. Will they have succeeded? Let's find out together ...

One of the commercials of inFAMOUS 2 just like that, trying to grasp the essence of the game, which turns out to be like a great crossroads of choices to make. As in the first chapter, also this time our Cole will be faced with many hard decisions to make, which could make him become a hero acclaimed by the crowd or an evil opportunist who wants the world for himself. And this is where we come into play, as Sucker Punch leaves us a free choice on an infinite number of actions to do or not to do, however leaving their mark on New Marais, whatever the path taken.
Compared to the first chapter, the Karma system is much more complex and influential for the purposes of history and free roaming, thus making the replayability level of the title very high, as we will be prompted to ask ourselves "And what would have happened if ...?" .

The personality of Cole in this title will be much more felt than its predecessor, even if in some cases it almost seems that there is an inconsistency between the dialogues required by Sucker Punch and the choices that we can then make. In any case, it is a facet that only the most attentive could be able to grasp, thus leaving one of the new faces of videogaming intact.
Being in Cole's shoes for the second time takes us back to a world that feels almost real (well, well, apart from the Conduit), in which we too wish we could have our part, because it looks like the mirror of our life, in which making choices is an issue on the agenda.

A city at your feet

Even if the story of inFAMOUS 2 offers several hours of gameplay - and to follow the opposite path to the one chosen the first time, the latter double - what is striking is the variety and quantity of secondary missions, which never tire the player, allowing him to wandering around New Marais many hours after the completion of the main story. Moreover, with the gem of the User Generated Missions, the longevity of the title increases dramatically, but this is a different kettle of fish ...

I have my powers!

Through the new UGM system, Sucker Punch puts a slice of power in the hands of players, who can develop their own secondary missions from scratch or "remix" others already created and then send them to the game servers, which will make them appear on the player maps as green exclamation marks. The editor may seem complex at first glance, but after a few minutes of trial and error, you come to understand the logic behind it, making the creative experience very enjoyable and rewarding.
Now the only limit lies in the gamers' skull!

The right song changes everything

That of the sound sector is one of the best structured of the whole title, in fact the soundtrack plays its part very well in the overall atmosphere and we can say, risking making a very unhappy joke, which makes itself heard!
Exactly, in the game environment the variation of music will herald various events and will still remain a pleasure for our ears, on every occasion.


Verdict 8.5 / 10 Electrifying Comment inFAMOUS 2 is a worthy follow-up to a title I was pleasantly surprised by and regretted not buying earlier. Even if those who hated the first chapter may be disappointed again (but do these people exist?), For Cole fans the title proves to be a must purchase, and that will not make any gamer regret the money spent. Pros and cons ✓ Very high replayability
✓ Influential karmic choices
✓ The idea of ​​User Generated Missions
✓ Excellent free-roaming x A few bugs while climbing buildings
x Personality not always consistent with our choices

Do you want to be a video game expert and know all the tricks, guides and reviews for your video games ? Holygamerz.com is a group of video game fanatics who want to inform you about the best tricks, guides and tips. We offer you the best information to be a reference in gaming, so here you can find guides, tricks, secrets and tips so you can enjoy your games to the fullest. Are you ready to get all the achievements of that game that you resist so much? Enter now and enjoy your favorite video game to the fullest!
News + Pokémon Presents February 2021: too much nostalgia, beautiful nostalgia ❯