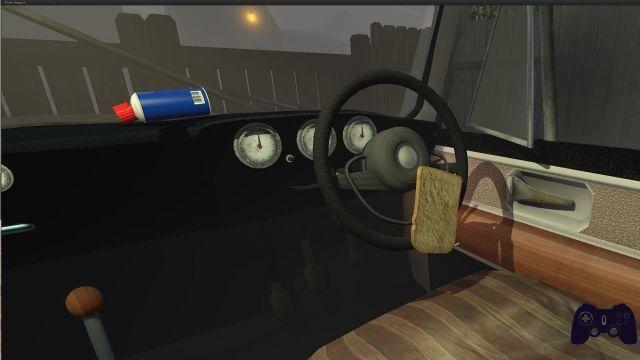 Veterans from the unexpected success of Surgeon Simulator, a title that in 2013 became a real viral phenomenon thanks to streamers and youtubers, the English team Bossa Studios finally returns to the charge with a new absurd and improbable simulator, a simulator of bread. If in recent years the audience of humorous simulators has been enriched with the most unlikely titles, from Goat Simulator a Rock Simulator, I am Bread is the first bread simulator in the history of video games. Finally released from Steam's Early Access on April 9th, we are now ready to talk to you about it in detail.

The epic story of a slice of bread

Even just from the premise it is clear that I am Bread is not intended as a traditional video game. In fact, it is impossible to analyze and evaluate it according to not only the canons of common triple A video games but also those of the majority of indie games.

impossible to compare it to anything else

I am Bread rather falls into that category of titles made for the use and consumption of that band of gamers who follow youtubers and streamers or who are actively involved in the process of creating such video content. In the game we will play the role of a slice of bread (although later different types of bakery products will be unlockable, from crackers to baguettes), with the sole objective of reaching a source of heat in order to be then toasted on both sides. The locations at our disposal will be the familiar ones of the various rooms of a common home, with all their set of furniture, tools and objects of daily use. From time to time the heat sources that we will have to reach will be among the most disparate, from a common toaster to radiators and irons. During the various journeys we must be careful to avoid dirty surfaces, such as floors, and anything that can make our slice of bread inedible: ants, glass shards, rotting food scraps, and so on. Whenever we come into contact with these objects and surfaces the edibility bar will begin to drop rapidly, and we will have to be quick to move away from the source of dirt in question. On the contrary, the player is encouraged to get in touch with anything that can make the slice of bread more appetizing: jam, butter, various ingredients. In this case, upon completing the level, you will get bonus points.

The game levels are structured in the form of playground, in a way that is very reminiscent of the first experiments of 3D platformer in the 90s. The implementation of a rudimentary physical simulation allows a considerable degree of experimentation in the choice of paths: you can go from shelf to shelf or try to hang from the ceiling or walls, try to climb to the top of a stack of boxes and then make it collapse to your destination or jump on a conveniently abandoned skateboard in the middle of the kitchen.

The structure of the levels seems very well designed to favor the wildest experimentation and the realization of absurd and hilarious solutions by the player, but the work of the developers in this sense is held back by a big, huge limit. The controls of I am Bread are in fact extremely difficult to master, unsuitable for the accuracy required by the gameplay and honestly terrible. Inspired by titles such as QWOP e Octodad, our slice of bread will be able to flex its ends in various directions. To do this it will have to “cling” with one or two corners to a surface, moving around these fixed points. The system is far from immediate and the first moments of I am Bread are absolutely tragicomic: it is impossible to get the slice of bread to move as you would like. Even using a gamepad (recommended by the developers) and after passing the tutorial level, the situation remains critical and the control system chosen turns out to be completely inadequate to face the challenges proposed by the game. It does not help the presence of a grip bar, which will gradually empty as we decide to adhere to a surface or an object. Not infrequently it will happen to run out of it in performing a difficult climb, inexorably falling towards the ground and the game over. The intent of the developers was clearly to create a title where from the union of unreliable controls and physics simulation surreal and hilarious situations arise, but the excessive difficulty in moving the slice of bread thwarts every effort and frustrates the player. Even using Magic Jam, an upgrade available after failing a certain level repeatedly does not improve the situation. In fact, it becomes invulnerable (however, receiving the worst possible score upon completion of the level) but in this case the game is emptied of any challenge and sense of urgency, weakening any incentive the player had to seriously commit.

I am Bread offers seven levels to indulge in, accompanied by the funny background story of the owner of the apartment where the game is set. He will watch helplessly in the pandemonium we have unleashed around the house, and in telling around that the house has been vandalized by a slice of bread, he will be believed to be mentally ill. The idea is nice, but it is only realized by reading the psychologists' reports at the beginning of each level. In reality, it becomes difficult for the player to become passionate about the poor man's misadventures, and the whole affair leaves some time it finds. There are obviously alternative methods, more marked by free roaming and "creative devastation", but the general feeling is that of a title poor in content.

Things could have been very different with a more accessible control system, but when even a quarter-hour game becomes terribly frustrating, the player is absolutely not tempted to pick up I am Bread. From a technical point of view we are faced with a cheerful and carefree presentation, with simple but adequate graphics created with Unity. Although the title has in fact come out of Steam Early Access, they still remain significant technical problems, including crashes on launch, flickering light sources, elements not fully rendered, and so on. If it is true that these problems will certainly be corrected in the future, perhaps it would have been the case to extend the Early Access period, as some players are experiencing a title "finished" in theory but not in fact.


Verdict 5/10 Good as bread ... but also not Comment The attempt to realize the heir of Surgeon Simulator or Goat Simulator this time cannot be said to be successful. Despite the excellent conditions for yet another title deliberately idiotic, ridiculous and hilarious, I am Bread throws everything to the winds due to an excessively unmanageable control system, absolutely unsuitable for the precision required by many of the game's challenges. Unlike a title like Goat Simulator, which from similar premises managed to create funny and absurd situations for the player, albeit limited in the variety of contents, I am Bread is excessively frustrating and in general not fun. There is no doubt that some let's play or stream of the title may be able to snatch a few laughs from the spectators, but we are faced with a game that is much more fun to see than to play. Pros and cons ✓ Sense of humor and various absurdities
✓ Conceptually interesting x Terrible controls
x Frustrating
x Poor in content
x Various problems of a technical nature

Do you want to be a video game expert and know all the tricks, guides and reviews for your video games ? Holygamerz.com is a group of video game fanatics who want to inform you about the best tricks, guides and tips. We offer you the best information to be a reference in gaming, so here you can find guides, tricks, secrets and tips so you can enjoy your games to the fullest. Are you ready to get all the achievements of that game that you resist so much? Enter now and enjoy your favorite video game to the fullest!
The Witness Review ❯