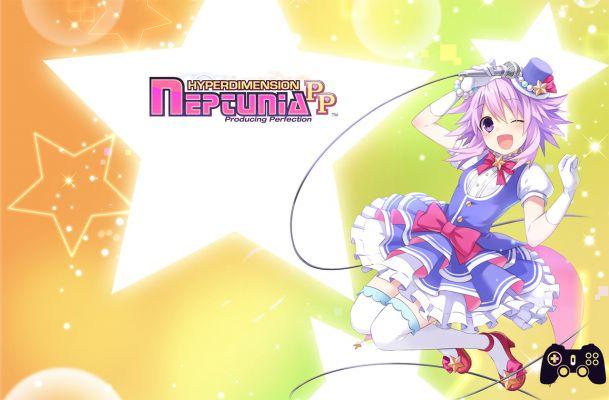 This year NIS America is really indulging itself, bringing niche titles with a markedly Japanese aftertaste to Europe, and after having "given us" pearls of the caliber of Danganronpa: Trigger Happy Havoc and interesting surprises like Demon Gaze, today is the turn of a rather bizarre and particular title. Let's talk about Hyperdimension Neptunia: Producing Perfection, an idol-themed spin-off of the famous Compile Heart / Idea Factory JRPG series that parodies the videogame world and debuts exclusively on PlayStation Vita.

The dancer of Seville

Putting aside the role-playing adventures of Neptune and the other Gameindustri gods, the world of Hyperdimension Neptunia is ready to face a new crisis. Public interest in the Console Patrol Units (or CPUs, or the personification of the home consoles Sony, Nintendo and Microsoft) lost due to a group of evil idols called MOB48 (clear reference to the real AKB48) made up of the old defeated nemeses in the past, it will be our task as manager and producer to bring one of the 4 protagonists to success, regaining the interest of the population and the splendor of the past to the sound of songs and choreography. And we will have to start from scratch by climbing the charts, doing promotional and advertising activities with the aim of launching our idol and growing the number of fans; just as it will be essential to participate in events or focus our efforts on the technical aspect of the idol's work, following singing and dancing lessons to increase statistics relating to the artistic sphere.

Between one activity and another that will take place over the course of a day, the player will find himself witnessing long sections with a hybrid formula that mixes together elements from visual novels and sim dates, where we will experience the life of the show firsthand. among the doubts, fears and vices of our protégés on their way to success. Along the lines of the canonical chapters, from which it deliberately departs at the storyline level, the game offers the same level of narrative, with paradoxical situations, often bordering on the absurd and that kind of parody humor that made us appreciate the previous episodes so much. Still with regard to the part relating to the narration that intersperses the various management tasks, keeping the value of the enthusiasm of our protagonist high, some scripted events will be made accessible that will allow you to witness certain situations that once concluded will unlock within the I play new costumes and accessories for girls or characters to use in one of the secondary modes of the game and which we will talk about later. By completing the game, on the other hand, it will open up the possibility of restarting the adventure, either by reusing the same idol, perhaps to unlock other events not accessible during the first run of the game or to switch to one of the others and experience new stories.

What we have dealt with so far represents only the first part of Hyperdimension Neptunia: Producing Perfection, that is the preparation for the concert, what should be the fulcrum of any idol simulator worthy of the name. We, as manager and artistic director, have the role of managing the girl, her costumes and her position on the stage, as well as the choice of the song to be performed and the special effects to be used during the performance, which will be fundamental for literally drive the public crazy and be more successful. Once the concert has started, we will find ourselves in control of a virtual camera with the supreme purpose of directing the direction trying to obtain shots that have a strong hold on the audience, and based on their reactions to use special effects, ranging from laser rays to simple confetti in order to increase the level of fan satisfaction. Here come the first limitations with respect to one of the cornerstones of the genre, above all THE iDOLM @ STER. During the performances our contribution is rather limited and the actions tend to become automatic and repetitive right from the start. No music-themed minigames and few songs to sing during concerts. Even the phase preceding the show appears quite approximate in terms of influence for the performance and although the game provides various information on the tastes of the public, it does not seem that the changes made from time to time affect the success of the show too much. piece.

Even from the managerial point of view after the first few days everything becomes quite automatic and repetitive. We will have to be able to undermine the Mob48 within 180 days, under penalty of game over. It will hardly happen to reach that date since the level of challenge is quite low, leaving anyone the ability to complete the game with ease. Another element to take into consideration is the stress level of our idol, which if not controlled will lead to unpleasant events, penalties on the success of our workouts or in more extreme cases directly the gameover. To keep stress at bay they will be able to take a few days off, going on vacation or spending time to increase our relationship or that with the other Console Patrol Units which will allow, after reaching a certain level of popularity, to start a group formed by two or three elements. In the case of an idol group, all the processes relating to the preparation and the concert do not undergo any type of change, while the share earned will be shared equally among the members.
After the main mode it is possible to have fun in the Unlimited Concert, where without any limitation of time or score you can take part in some concerts, always deciding how to conduct and direct them in a completely relaxed way. The modality, on the other hand, is more voyeuristic Viewer which allows us to observe and touch (with related reactions) the three-dimensional models of the protagonists and some secondary characters of the original series that can be unlocked by activating certain events in the Producer Mode.

Kick, punch, it's all in the mind.

Even technically the game developed by Tamsoft (former authors of the series Senran Kagura) shows its limitations, as the original series had already done with the three canonical chapters. The managerial parts are made through static screens, where the artwork of the protagonists slightly animated in facial expressions and movements alternate on the screen and mark the numerous exchanges of words. Compared to the older brothers, certain illustrations are missing relating to the events that take place on the screen forcing the player to travel with the imagination. Better, in part, the work done for the part of the concerts where the game abandons the 2D silhouettes to rely on the three-dimensional versions of the 4 videogame gods who, with fairly limited animations, move on stage choreographing their own performances.
Each protagonist can be modified in appearance thanks to the new elements unlocked during the adventure or enriched thanks to the many accessories available. There are also the HDD versions of the same, divine forms of the girls who thanks to prosperous breasts and rather skimpy bodies it is possible to gather even more consensus among the public. On the other hand, everything else is more basic, such as the arenas where we will perform, in all 8, and the effects to be used during the concert that will embellish our choreography that will not be spectacular to the eye compared to their actual potential. The soundtrack of the game plays an encyclopedic function by enclosing many of the sounds already heard in the three chapters that make up the main series, while the songs sung are limited to 5, one for each protagonist plus a final song. While not a rhythm game, the limited presence of songs seems quite castrating for a title whose leitmotif is music. The fact remains that what little you can listen to is of excellent quality, and as usual the tracks have not undergone any kind of adaptation as it is possible to select the original Japanese dubbing among the languages ​​present in the game.

Verdict 7/10 Dance dance ballerina! Comment It would be stupid to reject the title only on the basis of certain limitations that the game brings with it without taking into account some fundamental factors for us. Hyperdimension Neptunia: Producing Perfection is a niche game that mixes numerous stylistic elements and a simplistic gameplay, which arrives in a market, the Western one, usually not very open to certain purely Japanese works but which despite everything in recent years has shown a certain open mind . As for the JRPGs of the Neptunia series, where the role-playing part is fundamental and the narrative deals with raising the fate of the production, the same happens in this exclusive PS Vita, where the interminable exchanges of words and the continuous references to video games (in this case many towards the musical genre) they forgive certain levities that occurred on a playful level. Never as in this case we recommend the game to those who have had the opportunity to appreciate the adventures of Neptunia, Noire and the other CPUs, in which they will find hours of healthy and pleasant fun and lots of laughs, and fundamentally, it allows you to put your hand to a genre , that of idol simulators, which it is difficult to find every day. Pros and cons ✓ It's an idol simulator ...
✓ Classic style over the top
✓ Soundtrack full of songs from the old chapters x ... even if with basic and repetitive mechanics
x Few songs sung
x Those who don't appreciate the genre might get tired right away
Do you want to be a video game expert and know all the tricks, guides and reviews for your video games ? Holygamerz.com is a group of video game fanatics who want to inform you about the best tricks, guides and tips. We offer you the best information to be a reference in gaming, so here you can find guides, tricks, secrets and tips so you can enjoy your games to the fullest. Are you ready to get all the achievements of that game that you resist so much? Enter now and enjoy your favorite video game to the fullest!
Dota 2 review ❯