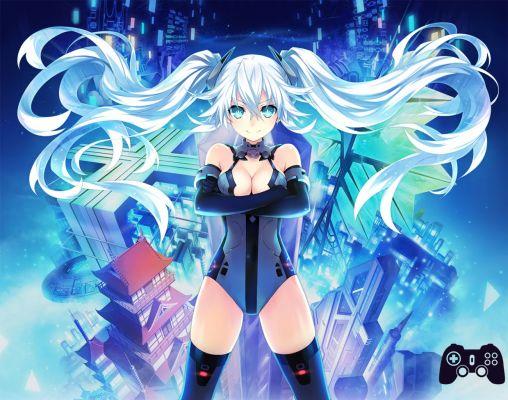 Idea Factory International continues to extend its catalog of games available on Steam. After bringing the three main chapters of the Hyperdimension Neptunia saga, the company is also bringing the spin-offs linked to the brand one at a time. The previous time it was the turn of Hyperdimension Neptunia U: Action Unleashed, while now it is the turn of Hyperdevotion Noire: Goddess Black Heart. Before proceeding with the review, we remind you that the game will be available on Steam starting from April 26th.

Please note that the game was more accurately described in terms of storyline and mechanics in the review covering the original version released on PlayStation Vita. In the course of the next paragraphs we will deal, in particular, with the result of the adaptation to the PC version.

Hyperdevotion Noire is set in Gamarket's imagination, contrary to what happens in the other chapters of the saga whose events take place in Gamindustri. The differences that can be found between the two worlds are almost nil, as the four capitals protected by the now well-known goddesses are equally present. The game will begin with a clash between the latter which will see Noire as the winner, the obvious protagonist of this spin-off. After a few events, the focus will shift to Noire, undecided on what to do when a new character enters the scene, Eno, who suggests she use a strange device that will guarantee her dominion over Gamarket without having to face the other goddesses. The heroine, eager to put an end to these clashes, decides to follow the traveler's advice. He will soon discover, however, that it was a deception whose only consequence will be that of having dispersed all the share previously accumulated (and consequently a large part of its powers). The entire game world is now in chaos and Noire finds himself having to remedy the situation. In the first place she will meet a "player" who will decide to help her, officially becoming the secretary of the goddess. With the continuation of the story, the relationship with the other goddesses and with the generalesses, representation of various entities of the videogame world, will deepen. As per tradition, the excessive fan-service that has characterized the saga since its debut and which, by now, has well defined its target audience, cannot be missing even this time.

The game mechanics differ greatly from what has been seen in the other chapters of the saga arrived on PC. Indeed, Hyperdevotion Noire has a playstyle based on the strategy genre, as already seen in the titles of brands such as Fire Emblem and Disgaea.

The player will be able to place their characters on a sort of chessboard (the maximum number of units and the mandatory ones will depend from mission to mission), with the aim of eliminating the targets. During the fighting it will be possible to find treasure chests, which can be opened in "different ways", or chests that can be thrown at the enemy. Each unit, whether enemy or allied, will be able to move a certain number of squares on the playing field, and then possibly perform attacks, techniques or special hits related to the Lily Rank. The latter plays a decidedly fundamental role in Hyperdevotion Noire. In fact, using techniques with a character, while he is flanked by one or more allies, you will get points that can be used to perform the transformation into HDD (here temporary) or to launch powerful attacks. Each heroine can be equipped in the classic way also seen in the other chapters, with the difference that it will be possible to set, through appropriate objects, an elemental affinity useful for exploiting the weaknesses of the enemies.

Lastation will beInstead, the game HUB. Here it will be possible to participate in new and old missions, that is the mechanism with which the progression in the game is structured, you can access the shop to buy new weapons and objects, or you can develop various discs and tools (exactly as in Hyperdimension Neptunia Re; Birth), or even go to see the artistic contents of the game. Finally, there is a section called Basilicom. Here a sort of meeting simulator will be created with which Noire will have the opportunity to help the citizens of Lastation by satisfying their requests.

The PC adaptation of Hyperdevotion Noire is perfectly successful. Starting from the controls, it will be possible to use both the controller, in an extremely similar way to what happened with the PS Vita version of the game, and the mouse-keyboard combination. The peculiarity, certainly not essential but which we were pleased to discover, is that the game is perfectly usable even with just the use of the mouse, without losing “ergonomics”. The technical performance does not disappoint, thanks to the high resolutions available and a high framerate (60 fps) that are easy to keep constant.


As you can see from the requirements also present on the Steam game page, it takes very little to be able to run Hyperdevotion Noire at full power. This is also possible thanks to the “chibi” style adopted, which considerably simplifies the processing requests. As on PlayStation Vita, there is double English-Japanese audio, while the sound sector manages to settle on the same level as the other chapters of the saga.

Verdict 8/10 Now even the chibi waifu Comment Hyperdevotion Noire is a spin-off with interesting and new mechanics compared to the canons of the saga. The graphic style, mixed with the strategic genre, has certainly paid off, with a product that is at least different from the one the brand has accustomed us to. Unfortunately, the same defects remain, which once again end up being strengths for others. The excessive fanservice that unites the chapters of the brand could make many people desist, as usual, but those who are simply looking for a good strategy cannot fail to take this title into consideration. Pros and cons ✓ Excellent performance on PC
✓ Nice graphic style
✓ Interesting game mechanics x Excessive repetition in some aspects
Do you want to be a video game expert and know all the tricks, guides and reviews for your video games ? Holygamerz.com is a group of video game fanatics who want to inform you about the best tricks, guides and tips. We offer you the best information to be a reference in gaming, so here you can find guides, tricks, secrets and tips so you can enjoy your games to the fullest. Are you ready to get all the achievements of that game that you resist so much? Enter now and enjoy your favorite video game to the fullest!
Final Fantasy XV Review ❯

Life is Strange: Before the Storm Episode 3 - Hell is empty review

Guardians of the Galaxy Episode 3: More than a Feeling review