How to use the Ping command 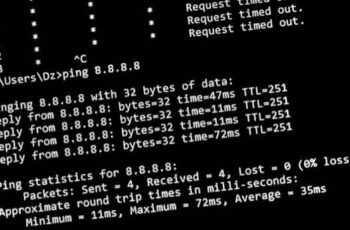 How to use the Ping command to troubleshoot network problems. The ping command is one of the most useful network diagnostic tools at your disposal. It is useful for finding problems both on the local network and on the Internet in general. Let's take a look at what the ping command does and how to use it.


What does it mean to use the Ping command?

Pinging something on a network means sending an Internet packet to a target computer or other network device, asking for a response. That device then sends you a package.

When the packet comes back (if it does it back, that is) you can learn all sorts of interesting things about the network between you and the destination.

Most commonly, we simply want to know how long the response takes. So when someone mentions the "ping" of (for example) a website, it is usually expressed in milliseconds, with a lower number being better overall.


How to fix Windows 10 does not detect the WiFi network

What is an Internet Package?

To better understand ping, you need to know a little about the packet you are sending to the target computer or network device as a “ping”.

Packages are the fundamental units of the modern Internet. When you send data to someone, such as a photo, it is broken down into small pieces. Each packet is tagged with a source and destination address and then sent to the Internet. These packets pass through many other computers, such as web servers and internet routers. Packets continue to be transmitted until they reach the target system.


Connection problems with home WiFi: how to solve them

What you can use Ping for

Even if your ping reaches its destination and you get a response, the ping response will tell you how long it took a packet to return and how many packets were lost. You can use the ping command to diagnose if the connection is too slow or unreliable.

What kinds of things can you ping?

How to install or add a network printer

How to use Ping on Windows


We have used Google.com as an example below.

Once started, ping will send out four data packets.


A message for any packet that says "request timed out" implies that your computer has not received a response from the destination. If some packets are lost, some of the routing paths between the computer and the destination have a problem.

Useful modifiers to the Ping command for Windows

There are a few command options you can use with the ping command. Switches are extra options for customizing the behavior of the ping command. If you want to see a full list of options, all you have to do is type ping /help at the command prompt and press Submit. You will see the entire list, syntax and usage.

Below is a list of some command options that are useful for most users:

How to use Ping on macOS

For Mac users, you need to use Terminal. Previous versions of macOS included Network Utility, which was a graphical utility you could use to run network commands like ping.


However, the latest versions have deprecated this utility in favor of Terminal. It's not that intuitive to use, but it's still quite simple. First, open Terminal by opening Spotlight ( Command + space bar ) and typing terminal.

To start a ping simply type the command as shown in Windows: ping followed by the IP address or URL of the website, or ping www.google.com.

The main difference you'll notice between using ping on Windows and Mac is that on macOS it continues to work until you manually stop it. To stop pinging the device or URL, press Ctrl + C. This will bring you back to the main prompt.

To see a list of all the parameters you can use to ping on macOS, you can type manping and get the help pages. There are a lot of switches, so take your time playing around with the different options.

The ping command is very versatile and is often the fastest way to figure out where the problem is on a network.

How to use the walkie talkie on Apple Watch ❯

add a comment from How to use the Ping command