How to use Airplay with Chromecast: everything you need to know 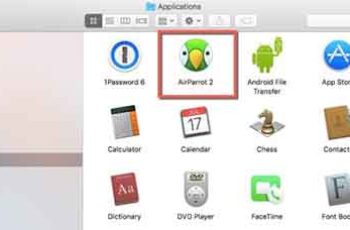 
Still, getting all your gadgets to work the way you want can be a much bigger headache than it should be at times. It shouldn't be like that, though.

Here's an example: As a Mac user, how do you extend your desktop or use Airplay via your Google Chromecast device? This article will look at a fairly simple way to get this setup to work right now.

Normally a Mac won't let you cast (mirror) the entire desktop or a Google Chrome browser tab with a Chromecast device, however not natively. You will need another application to make those parts work together.

You can take a free AirParrot 2 test for seven days. After that, if you decide to buy the app, it only costs $ 12,99 and is completely wireless, so you don't need any additional equipment to make it work. With its most recent update in September 2017, it is also quite up to date.

AirParrot 2 not only allows you to extend your desktop, but can also share a single app on any device your Chromecast is connected to, where you can listen to audio tracks played on your Mac or stream media files directly from your Mac to your Chromecast. device.


We think it's a worthwhile investment, especially if you want to extend your Mac or AirPlay display directly to your Chromecast device.

AirPlay is an Apple feature that allows users to quickly cast the current screen to another device. This feature is incredibly useful for viewing content on a larger screen.

Not only for viewing content, but also for listening to music and sharing content with others, this feature is native to all Apple devices. You can use Apple's AirPlay with any other compatible device.


Chromecast is similar to AirPlay except it's a Google device. Unfortunately, the two are not overtly compatible with each other. But that's okay, because we can still use AirPlay with a Chromecast device.

Why not try AirParrot 2? You can use it for seven days for free, so go to the website, download it and see if you like how it works. It is compatible with Mac OS X 10.7.5 and later. It's not just for Mac, you can get AirParrot 2 on your Windows computer or Chromebook too. We'll talk about that further down, so keep reading.

In addition to Chromecast, it will also work with Apple TV (with the AirParrot remote app, additional $ 7,99 on iOS devices), Smart TVs, other computers in the house, and speakers. Pretty cool, right?

Here's how to run it on your Mac:


You can now extend your Mac's desktop or use AirPlay with Google Chromecast to further expand the use of your Google Chromecast device than before. And you can do it all for a lot less than buying a brand new Apple TV.

In terms of out-of-the-box compatibility without having to make a significant investment, we've found the AirParrot 2 to be the best companion to Google Chromecast. Once the trial period is over, this application is definitely worth buying - as far as we're concerned it's child's play.

For Windows, AirParrot is compatible with Vista, 7, 8.x and 10, but not with RT. To make it work, follow the same basic steps to get the AirParrot 2 application for Windows as you did for Mac.


First, go to the AirParrot 2 website. Once you have landed on the Windows AirParrot 2 download page, at the top right, click on the green "TRY" button. Once downloaded, you can use AirParrot 2 for free for a seven day trial period.

The ability to extend the desktop from your Windows computer is still in the works, but will be coming soon. What AirParrot 2 and Windows can currently do is mirror (AirPlay) your display to Chromecast, only share an application via your Chromecast device, play audio via Chromecast, and share files to where your Chromecast is connected.

If you want hands-free control of AirParrot 2 with your Windows computer and Apple TV, you must have an iPhone, iPod touch, or iPad with iOS 8 or later.

You will need to purchase and install the AirParrot remote application, which costs $ 7,99. This will allow you to use the remote app to control AirParrot 2 on your computer.

However, you can use Airplay from your Windows computer to your Apple TV just like you would with the Chromecast instructions we provided.

After pairing the AirParrot Remote app with the AirParrot 2 app on your computer, you will have total control of your PC without having to be in front of you.

In the final determination, AirParrot 2 is the perfect companion application to use with your Google Chromecast device, Apple TV, or Mac and Windows computer.

When you want to mirror or extend your desktop, listen to music, show some photos, or let someone else see a file from your PC via Google Chromecast or Apple TV using AirPlay, this allows you to do it without any problems.

You won't need any other tips and tricks - the AirParrot 2 app does the job for you. AirParrot 2 for Google Chromecast, Apple TV, Mac, and Windows is a step forward in making things work together.

Is AirPlay compatible with Chromecast?

Unfortunately not directly. You will need the help of a third party service to cast your Apple device to a Chromecast device.

Should I use AirParrot 2?

Depending on the content you are trying to stream, you can completely bypass AirParrot 2. For example, if you have the ability to use the Google Chrome browser, you can quickly and easily cast the screen to your Chromecast device from your Mac device.

How to Stream Amazon Prime Video to Chromecast

How to use AirPlay without Apple TV ❯

add a comment from How to use Airplay with Chromecast: everything you need to know