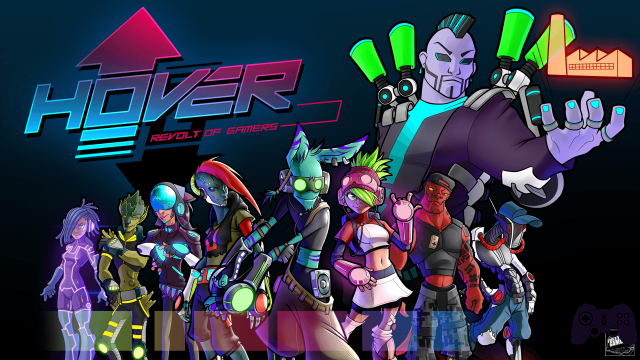 On November 24, 2000, a small milestone was released on the never too late Dreamcast which, among other things, actually went to clear the use of cel-shading for the creation of characters and settings in a video game. In the almost 15 years that have passed since that day, however, fans of Jet Set Radio they had to settle for little else, which we can summarize in a couple of ports and a (very successful) sequel included in the launch lineup of the first Xbox. Perhaps also for this Hover: Revolt of Gamers managed to attract the attention of a certain audience, making no secret of the inspiration taken not only by the Sega series but also by another title very appreciated by players such as Mirror's Edge. On the occasion of the release of the game's first Alpha in Early Access on Steam we put the roller blades on and took a spin on the creation of Fusty Game: will we have liked the appetizer?

The Concept of Love

Just started the title and created your own character (currently the "aesthetic interventions" on your digital double mainly concern the colors of the suit) the similarities with the world of Jet Set Radio are revealed practically in 0 time: the new mayor of the city where the events are set has decided to implement a repressive policy in perfect Goji Rokkaku style and has basically banned the fun, using an iron fist especially with regard to video games. The aim of the game will therefore be to take part in a real revolt of the players, challenging the authorities by detaching the anti-videogame propaganda posters, infiltrating the various control centers and finding and redistributing the consoles stolen from the population (in the map available in this Alpha version, for example, it is possible to find Gamegirls, portable consoles parody of the iconic Game Boy).

The basic mechanics trying to blend parkour with inline skates, with a splash of Prince of Persia

The mechanics, as mentioned, trying to mix what is seen in Jet Set Radio and Mirrors Edge: in addition to being able to control the character and the shot, the player has the ability to jump (with attached Wall Jump to reach the highest areas and climb the nearby walls ) and to resort to grinding, both on handrails and railings and "Prince of Persia" to run along the walls. Particularly appreciable is the possibility of "rewinding" the movements made thanks to the suit at any time, especially because unlike Prince Ubisoft in this case the time continues to flow anyway and therefore the rewinds do not affect the game of any opponents, but they only serve to make the inevitable mistakes made when moving at full speed less frustrating. Everything is playable in first or third person (by default an "automatic camera" is active which basically packs everything in subjective and switches to the view behind when performing jumps and stunts worthy of note).

On the content front, in addition to the aforementioned collectibles, there are a good number of secondary missions, essentially divided between the classic racing challenges (in which you have to go through the checkpoints and get to the finish line before the opponent) and the Gameball games, in which you aim is to collect a ball before the challengers and use skates and parkour to hit the board and score. In short, considering that we are talking about an Alpha, the material is certainly not lacking, also given the possibility of using the product online together (and against) other players, but clearly in the final version a much greater variety is expected. As we also expect a less dispersed organization of contents, basically left completely to the in-game scanner (which signals the presence of events on the screen by making some spartan indicators appear on the HUD) and already in this development phase a bit worried when it comes to "indexing" the contents available.

From a visual point of view, Hover clearly could only re-propose a cel-shaded product, with a final result very similar to what has been seen for example on the Borderlands series. Even in this case, however, we are talking about a product at the beginning of development, so we are not surprised to see some "raw" elements on the screen such as the aforementioned indicators and in general the game menus (quite spartan). On the other hand, we regret having to make some technical considerations, not so much in terms of performance as on that of optimization: right now the title of Fusty Game shows a little bit of its side from this point of view, especially considering that even "playing" a bit with the various graphic settings, the final result does not change much, especially by taking fluidity and the number of frames per second as a yardstick. Nothing dramatic (not for nothing the game is still in Early Access), but surely this is a point on which the developers will have to intervene as quickly as possible.


A lot of expectations on the audio front

Finally, let's spend a few words on how much we were able to listen to the sound accompaniment, which among other things will see the involvement of Hideki Naganuma (historical composer of Jet Set Radio and Jet Set Radio Future): the acoustic component works for now and is absolutely company, but given the names brought up, there are many expectations also from this point of view.

Comment Our first road test with Hover left us quite satisfied: the potential to bring out a worthy "illegitimate godson" of the two brands mentioned as a source of inspiration there is everything and the mechanics, especially the rewind "with knowledge of the facts ", they work. In the short term, however, we must absolutely intervene on the optimization front, and perhaps make some aspects such as the in-game scanner a little less spartan in order to better organize the Pros and Cons contents. ✓ Lots of potential
✓ Fun and fast-paced
✓ The soundtrack looks promising ... x ... But the landmark is a sacred monster
x Still a little rough
x Not very optimized

Add a comment from Hover preview: Revolt of Gamers