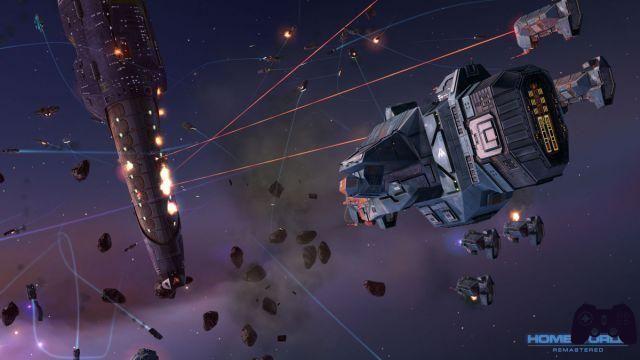 On the eve of the new millennium, as was also the case in other aspects of mass entertainment, THQ and the Relic team were also preparing to explore new horizons beyond the borders of the planet. At the time, these efforts resulted in one of the last videogame masterpieces of the 90s, dedicated to strategic fans: Homeworld, an exciting space opera not far from the narrative drama of Battlestar Galactica.
Acclaimed by fans, and honored with an expansion (Cataclysm) and a sequel dated 2003, Homeworld is still considered one of the pioneers of 3D strategy, perfectly marrying the new dimension of movement with the freedom given by deep space.

Now, 16 years after the original, Gearbox takes over from the defunct THQ, and breathes new life into the series with the Homeworld Remastered Collection, a glorious HD remake that combines classic atmospheres and recent graphics.

Strong of a more than evident attention to detail, we are again called to explore, fight and survive in the sidereal depths. The purpose is once again only one: to go home.

Now as then, one of the strengths of the Homeworld series is its storyline, told through the use of drawn sequences and short ingame cutscenes, accompanied by a very pleasant atmospheric soundtrack.

After millennia of survival on the arid planet Kharak, at the edge of the galaxy, the advanced humanoid race Kushan discovers a buried ancient spaceship. Inside, a stele reveals the coordinates for a planet, identified by a single word, so ancient as to be common to the various clans fighting for resources: Hiigara, home. The discovery brings the clans together in a common purpose: build a star fleet and reach Hiigara. This feat is made possible by the sacrifice of a brilliant scientist, Karan S'Jet, merged with the central AI of the mothership, becoming the thinking computer that drives the entire fleet. The first travel test, however, ends with the fleet's return to a bombed-out Kharak, and the discovery of an unknown enemy threatening to completely annihilate the Kushans. The mothership and the few survivors, from explorers to a mysterious past, also become the only hope for the future of the faction.

Among poisonous nebulae, lost cultures, pirates and space merchants, the search for a new homeland begins, which will lead players to experience firsthand the dramatic and at times epic journey of the Kushans home.

A galaxy in 4K

Homeworld is one of the rare titles that stands the test of time well, aided by the fact that it was, in its time, a particularly innovative title. However, as graphics quality rapidly advances, many visual aspects of the original stand out like a sour note. Fortunately, the Gearbox team did an excellent job on the Remastered Collection, using as a basis the graphics engine of the most recent Homeworld 2, and enhancing it with dynamic lights and high definition textures, which natively support ultra HD resolutions.

The result is an infinitely more satisfying gaming experience, capable of leaving historical fans without

the final visual experience is breathtaking

breath: details on the engines of the rescue corvettes, the animated cannons of the warships, and the burn effect of the fighter and gatherer engines will prompt more than one player to pause the game during an attack action, for the sole purpose of enjoying the spectacular view. Thanks also to the majesty of the environments, Homeworld Remastered Collection guarantees to satisfy even the most demanding fans of the Space Opera genre. 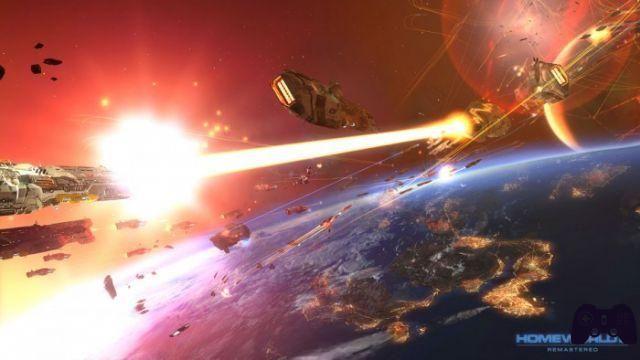 However, the title is not free from small stretch marks here and there, which, although they do not affect the final result at all, could jump to the eye in the early stages of the game. One of them is the slight adaptation lag of dynamic shadows, which especially in smaller vehicles, results in some small snapshots of shadows on three-dimensional models in motion. Fortunately, in addition to quickly getting used to it, we will often not have time to notice the problem, engaged in the micromanagement of the clashes during the breaks, and then enjoy the work on a wide field.

The Remastered Collection also presents the possibility to play the titles in their original form, with the related game mechanics, while limiting the multiplayer battles to the HD versions only.

As already mentioned, the Remastered introduces some particularly appreciated and necessary changes to both titles, which are not limited only to the graphics, but also range in terms of gameplay.

One of the main frustrations of the original Homeworld, for example, was having to keep an eye on the

SOME CHANGES MITIGATE THE ALREADY HIGH DIFFICULTY OF THE GAME

fuel for individual fighters and minor shuttles, making it essential to use support corvettes and medical vessels for refueling during longer journeys. In 2003, upon the release of the second Homeworld, this component was completely removed, and this change persists in both remastered versions. While this takes away realism and part of the strategic fun, one less aspect to manage makes the game more fluid, mitigating the already high difficulty.

Another important improvement is the automatic collection of resources remaining in a scenario at the time of the hyperspace jump (which marks the end of the mission): the main implication is that the whole game is smoother, without the need to actively spend a good half hour on each uncleaned map.

Unfortunately, if some changes are appreciated, others negatively affect the gameplay, and first of all a reduced effectiveness of the formations: in the original, changing the attack formation to a group of shuttles, allowed a rapid and immediate increase or decrease in efficiency, as well as guaranteeing a spectacular choreography in the air passages. The Remastered, on the other hand, focuses more on realism in this aspect, making the formations more chaotic and decreasing their attack and defense performance. Fortunately, the final result does not overly unbalance the difficulty, and requires old fans a little more than a couple of missions to get used to. 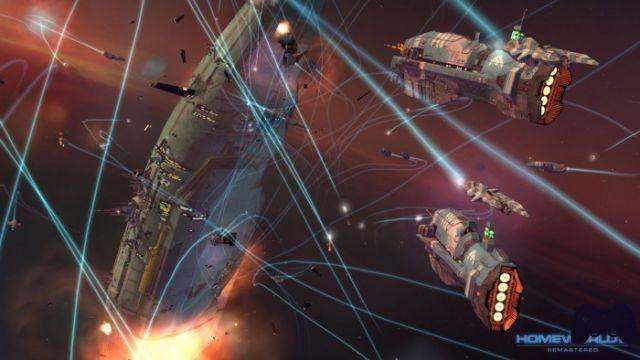 Apart from the graphics sector, and small changes to the gameplay, however, much of the original material has been left unaltered by Gearbox, in a policy of restoration of such stringent as to keep even some senseless bugs of the classic titles. An example above all, in the third mission (“The Return to Kharak”), taking possession of two enemy cruisers or saving all the cryostasis platforms prevents advancement to the next mission. Nothing completely gamebreaking, fortunately, and more than frustration, such a paradox almost steals a nostalgic laugh from longtime gamers.

Completely different, however, is the approach to the audio sector. With the exception of the original dub, which was already qualitatively high at the time (the monotonous yet emotionally human voice of Kharan / Fleet Command,

THE DOUBLE ROOM, AFTER YEARS, IS STILL OF QUALITY

years later, it is still a textbook example of excellent dubbing), the songs and sound effects proposed have been remixed and cleaned up. The final audio quality, like the rest of the work done in the other departments, could probably be a guideline on how high definition ports of classic titles should be made. Dramatic pieces such as Barber's Adagio for Strings, which over time became almost a symbol of the game, still come out with their heads held high, while the remix of the audio effects contributes to the rendering of the boundless atmospheres of deep space, while leaving a sense of vitality and focus on the action that captures the player.

The only flaw, unfortunately, is given by theabsence of the iconic The Ladder, prog-rock piece in perfect end of the millennium style that accompanied the players at the time of the return on Hiigara at the end of the first Homeworld, cut from the remastered due to copyright conflicts.

Verdict 9.5 / 10 The yardstick of every HD conversion Comment If these last few years have given us several leaps into the past with more or less successful collections and HD conversions, Gearbox's work is strongly placed in the first group. All aspects of the final conversion are meticulously taken care of, while respecting the original material in an almost reverential way: from the high definition textures to the streamlined and smoother game mechanics, the entire Homeworld Remastered Collection honors that nostalgic memory that the players who, sixteen years ago, entered the universe created by Relic. Thanks to the already high level of innovation of the classic titles, the result of the Collection is a product that is not affected in the least by the time elapsed, and indeed it is even improved, ready to be served to a new generation of players as even most of the titles current originals fails to do. Certainly appreciated by fans of the Space Opera genre (and especially by fans of Battlestar Galactica, to whose classic series, the title of Relic winks several times), the Homeworld Remastered Collection is simply the perfect example of all this at which a high definition conversion should aim for. Pros and cons ✓ Dynamic textures and lights with 4K support
✓ Gameplay changes, smoother than the original
✓ Still convincing plot after sixteen years x Some bugs kept from the original
x Multiplayer (in beta) limited to HD versions only
Do you want to be a video game expert and know all the tricks, guides and reviews for your video games ? Holygamerz.com is a group of video game fanatics who want to inform you about the best tricks, guides and tips. We offer you the best information to be a reference in gaming, so here you can find guides, tricks, secrets and tips so you can enjoy your games to the fullest. Are you ready to get all the achievements of that game that you resist so much? Enter now and enjoy your favorite video game to the fullest!
The Banner Saga Review ❯