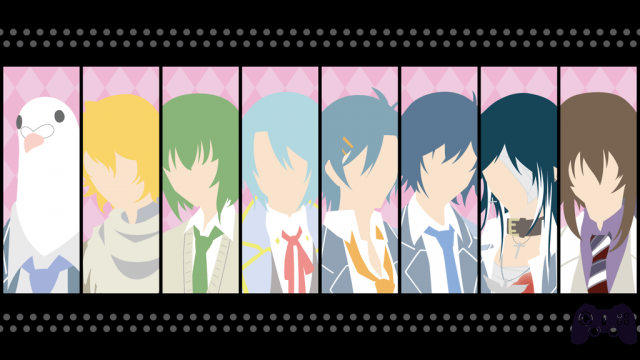 Hatoful Boyfriend was born in Japan in 2011 as a visual novel for PC, as a successor to a flash game created as a joke on April 21st of that year. PigeoNation inc. in collaboration with Mediatonic, last year released an international remake on Steam, and last July XNUMX thanks to Devolver Digital Hatoful Boyfriend has also perched on PSN, in cross-buy (and with cross-save) on PlayStation 4 and PlayStation Vita, at a price of 9,99 €. Will new content, a Spanish translation and the ability to switch consoles at any time be enough to push the purchase of this very special title?

The girl who whispered to birds

Hatoful Boyfriend opens by letting you choose your first and last name, then going on to impersonate the only human in the school for gifted birds in San Columbia. Hiyoko Tosaka (the default name means chick) will soon meet pigeons, doves, quail, partridges and parrots and you with her. Each character is well characterized and, continuing in the different stories of each of them, Hiyoko will reveal their secrets and manias, making each bird unique and adorable (or detestable). From Ryouta, the pigeon best friend of the protagonist, worried about her mother and weak in health, to Sakuya LeBel, noble of origin and who looks down on everyone,

plot full of twists and emotions

from Kazuaki, a narcoleptic professor to Oko-san, fan-tailed with gymnastics and puddings, up to Nageki, an introverted turtledove always locked up in the library, and Iwamine, the doctor of San Columbia, disturbing and maniac. There is no shortage of other characters both primary and secondary, each with a particular quality that will transform Hiyoko's adventures in the school into real epics, of love, adventure and intrigue.

Behind the protagonist's love for birds hides a plot made up of twists and unpredictable events that unfold over the course of the game's 15 endings: Hatoful Boyfriend manages to capture lovers of visual novels by transforming an otome into a completely different type of game (we'll talk about it later) and causing strong emotions in the player (or in this case it is better to speak of a reader). To fully enjoy the title, you must in fact complete all the endings (for a total of about 6 or 7 hours), and thus unravel the skein of the mysteries of the society of the Birds: there is no shortage of twists, much less a vast sequel of quotes (to games, anime and pop culture in general) or goodies like Brian Pigeon's blog. 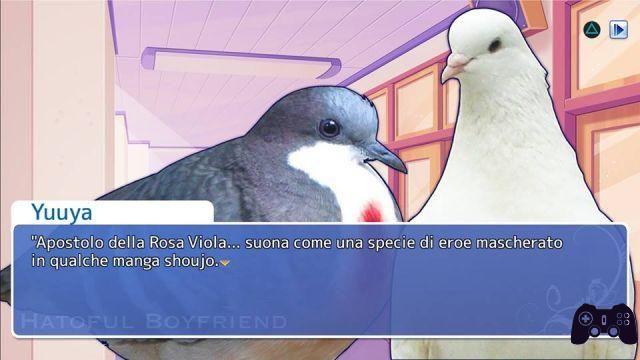 No play in the visual novels, retarded!

Let's clarify the genre of Hatoful Boyfriend: the visual novel. Unlike a Professor Layton, an Ace Attorney, a Danganrompa or a Life is Strange (but we could also mention one of the TellTale titles at random) which are graphic adventures, where through puzzles, choices and / or long dialogues you reach the end of the story in a visual novel we are faced only with lines of text, with the characters on the screen that follow one another and the protagonist who narrates the events in progress. In Hatoful Boyfriend you will be able to make choices that will affect the plot and that will lead you to one of the fourteen "normal" endings (we'll talk about the fifteenth later), one of which is completely unpublished.


There is no trace of any kind of gameplay

especially for Sony home consoles. During the course of the route, Hiyoko (the protagonist) will have to choose the club to join (which will lead to love interest with a different character depending on the activity), the lessons to attend (which will increase internal statistics useful for others two endings and for the alternative ones of three characters) and finally different positions that as the first choice will affect the relationship with the various birds.
The first love stories focus a lot on the concept of Otome (a male date sim where the protagonist must fall in love with one or more of the counterparts) with of course the unique exception of Hatoful Boyfriend, the presence of only birds in the cast (protagonist at part), and they end in about 25-30 minutes each (accelerated thanks to the possibility of fast forwarding the text already read through a triangle), once more than half of the fourteen normal endings have been completed, you will have access to a new mode game named Route of the Promise, or BBL or in other words the story that tells all the secrets of San Columbia and that leads inexorably to the true ending of the game.

So far we have defined Hatoful Boyfriend an otome and a visual novel but we have not yet gone to delve into the hidden side of the title, which at first glance, of any individual, will seem just the umpteenth crap created by a bored Japanese.

And instead we are faced with a case where the cover does not reflect the content: what could seem a dating simulator with birds, turns, in the second half of the game, into a completely different visual novel (we do not tell you how and the new genre to leave you the taste of surprise), losing all the elements of otome and leaving space for the plot and the characters. A pleasant surprise that completely transforms the experience, although it remains anchored to the canons of the genre and does not play for anything, but the events follow one another inside the San Columbia providing plausible answers to almost all the questions that the player asks. from the start of the game (including why the world is dominated by birds) these are also mentioned during certain "main" routes but only in the BBL all the pieces fit together in the right place. It is therefore necessary to play every single story to give a definitive judgment on the work, also because the epilogue will be unlocked only once the other 14 endings have been seen.

There is not much to say on the technical side of Hatoful Boyfriend: the backgrounds are completely hand-drawn and digitally painted, while the protagonists are represented by static photos of the bird in question, we will be able to decide at the beginning of the game if every time a new character is presented to us, we will also see him depicted (hypothetically ) as a human, in perfect style shoujo manga.
The sound sector does not present any sort of dubbing, and leaves everything to the background sounds and the minimal soundtrack that ranges from unreleased accompanying songs to classical music such as Tchaikovsky's Nutcracker. As mentioned at the beginning, in the version for Sony consoles there is the Spanish language, which can be selected from the game menu and capable of making the title accessible to all: unfortunately there are a large amount of typos and poorly translated tenses, which could undermine the game. 'experience of some players, however it is possible to play Hatoful Boyfriend also in English, putting an end to the problem.

Verdict 8/10 Shin Megami Tensei: Pigeon Comment At first glance Hatoful Boyfriend may seem like a waste of time, a useless game where the main objective is to choose a bird and fall in love with it. Once you start completing the different routes, you will find that the title hides much more than what you see at first, until the unsettling arrival of the BBL plot that completely overturns the meaning and the initial message of the title. Hatoful Boyfriend, surprises and entertains, with well-characterized characters that evolve over the course of the visual novel. Obviously, belonging to this genre, the gameplay phases are practically absent, and it is especially recommended for those who do not mind reading and enjoying a story as it is told (making choices on the screen to change the outcome of the endings) . Pros and cons ✓ Well characterized characters
✓ 15 different endings x Some mistakes in the Spanish translation
x Not suitable for everyone
Do you want to be a video game expert and know all the tricks, guides and reviews for your video games ? Holygamerz.com is a group of video game fanatics who want to inform you about the best tricks, guides and tips. We offer you the best information to be a reference in gaming, so here you can find guides, tricks, secrets and tips so you can enjoy your games to the fullest. Are you ready to get all the achievements of that game that you resist so much? Enter now and enjoy your favorite video game to the fullest!
Guides How to Unlock New Game + and Persona 5 Strikers Postgame ❯