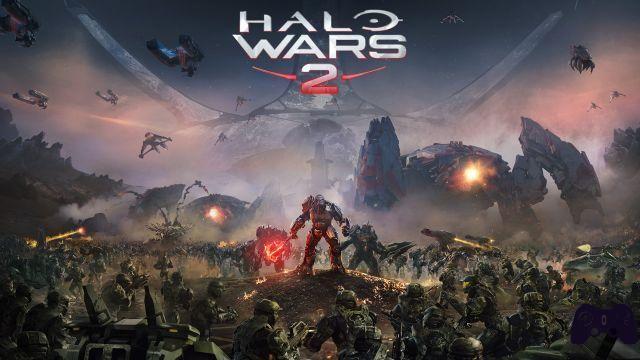 There is always someone who, during the various discussions on video games, comes up with the timeless “PC Master Race”. Although in 2017 this sentence has now become more flame bait than anything else, it hides half the truth behind it. Some videogame genres such as simulations, management or RTS (strategic in real time) on PC find a "natural" home where over the years and with technological evolution they have maintained a fixed point that goes far beyond the simple technical aspect, preferring it simply a practical one like that of the "combo" mouse and keyboard. Just the genre of RTS, considered in today's title, has struggled to creep into the console world due to a certain difficulty in being able to manage all the elements of the gameplay with ease, which require the user to speed in performing the assigned tasks, which the joypad fails to deliver. Among the various games that have ventured on consoles, perhaps one of the most popular to date is Halo Wars, RTS set in the sci-fi universe of Halo, which managed with its formula to find the right balance to survive outside the PC environment and work perfectly with a pad.
9 years after the original, it's time for Halo Wars to open up to a sequel, this time developed by Creative Assembly, which with the experience gained on the series of Total War promises to repeat the success of the first chapter, and keep the title of best RTS on console intact.

Second star on the right

HW2 proceeds at a tight pace, with the right balance between story and parts played

The story of Halo Wars 2 takes up from the secret ending of the first chapter, with Serina, the AI ​​of the Spirit of Fire, which awakens the captain Cutter and the entire crew of the spacecraft after 28 years in cryogenic stasis. The rude awakening is due to contact with a signal from a nearby planet, signal attributable to UNSC forces. Determined to investigate, Cutter will send a team to check the situation, discovering a seemingly abandoned human outpost in which they will find Isabel, AI and sole survivor of the colony. The team led by Spartan Jerome will also make the acquaintance of Atroix, a Brute who rebelled from the control of the Covenant, earning as much hatred as possible, and that with his army, the Exiled, is ready to take control of the entire universe. Having learned the situation, Cutter will start a counter-offensive that manages to stop Atroix's advance thus saving the galaxy again.

Having done this introductory hat on the story of this second chapter, it is necessary to focus on the narrative quality of Halo Wars 2. The story, which is can be completed within 6/7 hours on standard difficulty level, succeeds in the intent of provide the player with concentrated action aimed at showmanship. Each mission will have its own characteristics, from the discovery of the territory to those of defense of the zones or resistance, introducing in some way what will then be the activities to be carried out in the multiplayer modes. The story itself proceeds at a tight pace, with the right balance between story and parts played.
With this chapter, which as mentioned is set 28 years later than the events of Halo Wars, we are approaching narratively to Halo 5, resulting in contamination of elements in terms of lore. In this regard, i Log Phoenix, files obtainable in the single player campaign that deepen different aspects of the story and prove to be excellent tools to better understand the events of Halo Wars 2. It goes without saying that to enjoy Halo Wars 2 to the fullest, you must have not only played the previous episode, but also have a good understanding of the history of Halo as a whole, since the new game from Creative Assembly will not get lost in too many nostalgic moments, getting on its way and taking any previous knowledge for granted.

Halo Wars 2 is another exclusive Microsoft products which joins the stock portfolio of Xbox Play Anywhere, the program that allows you to play both the Xbox One and PC versions of the game with a single digital purchase. The substantial difference of the two titles lies mainly in the control system, which on PC can take advantage of the use of the mouse and keyboard to better enjoy the game, although the excellent optimization work done on the console makes Halo Wars 2 perfectly playable with the pad.
Despite the availability on both platforms, due to some technical limitations due to the engine, At the moment it is not possible to take advantage of PC / Xbox cross-play, both for online multiplayer and for the cooperative part. A limit that in fact fragments the user as happened for Gears of War 4, then corrected in the race to meet the numerous requests.
The arrival of the series on PC has prompted the developers to evaluate (and create) a port of the first chapter of Halo Wars, available, also on Xbox One (in addition to the Xbox 360 backwards compatible version), by purchasing theUltimate Edition of Halo Wars 2, a rich package that in addition to the two games also includes the Season Pass.
Halo Wars 2 will be available on February 21, while Ultimate Edition buyers will be able to get their hands on the game in early access starting from February 17th.

Only once you have completed the single player, Halo Wars 2 opens up to several possibilities, proving highly replayable also for the main campaign. Not just the collection of Log Phoenix and Skulls (the score modifiers present in the main series) are an incentive to replay archived maps, but also the additional difficulty levels represent an additional challenge to complete, testing our skills as stategi, and why not, perhaps facing them in the company of a friend in the very valid cooperative. Always to refine the various strategies we can throw ourselves into the mode Skirmish which allows you to face the game AI in single or co-op, useful for practicing with the various maps present. 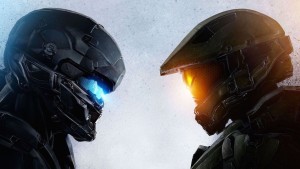 The control scheme is perfectly optimized to fit the pad

Halo Wars 2 broadly resumes the model of the first chapter optimizing the control scheme even more to better adapt to the use of the pad. With the left analog we will move the reticle to select the units or view the game area, which will be darkened until we bring one of our teams to the desired point (with "LB" we will be able to get married faster) while with the right one it will be possible to adjust the view by choosing the right angle or by zooming (in / out) to adapt to the various situations in the field. According to the type of key press "TO" (single, double or extended) we can select the various units, to which we can give the various orders with "X", which will serve both to direct them to a specific destination or to initiate the attack, which will take place automatically as soon as the enemies enter their line of fire. To help us manage the various teams, the backbone enters the scene "RB" which with a quick press allows you to select all those visible, or "RT" which will help us to quickly switch from one team to another (along with the D-pad). 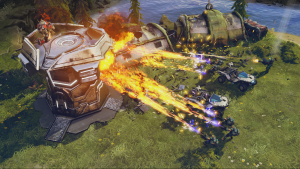 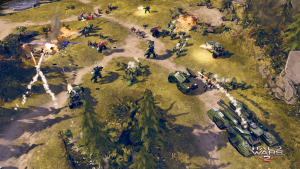 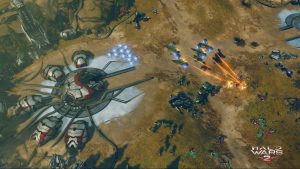 There are also quick shortcuts associated with the directional cross, indispensable for navigating when the number of elements to keep an eye on will increase dramatically, and which always depending on the type of pressure, allow for example to scroll between our bases or units, to set meeting points or respond to warnings of conflict quickly and painlessly.
By defeating the enemies we will get the Leader points, which can be spent to unlock new actions in the quick menu dedicated to Leader Powers, activated with the rear left trigger "LT". For example we will be able to acquire skills such as i Recovery Drones, which will serve precisely to restore the energy of our soldiers and vehicles, or use a zone air attack to take down enemy defenses and continue the advance, e good use of powers in battle is often the key to victory.

As the mission progresses, our units will face various enemies. By defeating them they will be upgraded to Veteran rank. By earning this title, they will become better performing in battle, with greater resistance to damage and a high rate of fire. Some soldiers, or vehicles, will then enjoy secondary abilities that will be activated with "Y" and will require some time to recharge to be used again. For example, soldiers will be able to equip grenades that they will throw on the enemy ranks, as well as the much more powerful Spartan soldiers will launch themselves with portentous leaps on the opponent or will try to seize their means.

1 2
Do you want to be a video game expert and know all the tricks, guides and reviews for your video games ? Holygamerz.com is a group of video game fanatics who want to inform you about the best tricks, guides and tips. We offer you the best information to be a reference in gaming, so here you can find guides, tricks, secrets and tips so you can enjoy your games to the fullest. Are you ready to get all the achievements of that game that you resist so much? Enter now and enjoy your favorite video game to the fullest!
Special The pirates of the web: when piracy and developers join forces ❯

Among Us: Does it deserve its own success? | Review