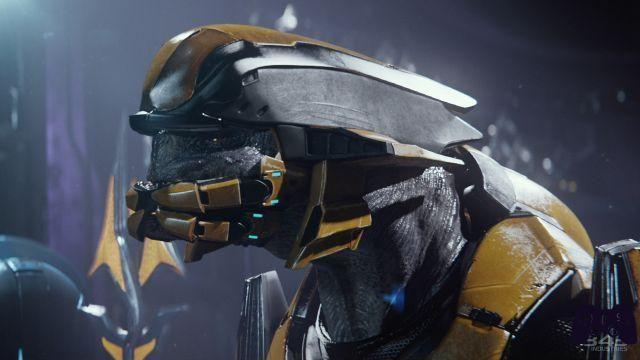 Summarizing Halo's “publishing history” and what the series has meant for the industry in a nutshell is a task on the brink of the impossible. After all, we are talking about an Intellectual Property born as RTS exclusively for Mac OSX and which has behind it events such as the divorce between Bungie and Microsoft, the handover to 343 Industries, as well as being able to boast of merits such as having dictated the lines guide for modern shooters and cleared through customs online multiplayer even on consoles. We will therefore limit ourselves to using two words: milestone. With Halo: The Master Chief Collection Microsoft and 343 Industries propose, for the first time on the same hardware, the four main chapters of the saga starring John-117, suitably remastered in high definition and brought to the next-gen. On paper, as we have already pointed out on the occasion of our test during the Milan Games Week, it is a collection to which to say no is perhaps even more difficult than to concentrate the entire history of the franchise in a few lines. So let's see if the work done by 343 Industries on the Spartan also holds up the clash with reality.

Welcome to the Cape museum

The Master Chief Collection is basically a Halo-themed videogame museum, to be visited in total freedom

Usually, collections like Halo: The Master Chief Collection are aimed at newbies and those who have never approached a series, bringing together even long-term fans almost by inertia to potential buyers. From this point of view, the Master Chief Collection differs from normal remasters by overturning (or almost this assumption): we are basically in front of a real digital museum dedicated to the figure of the Master Chief, where the player is left the full freedom to visit the exhibition as he sees fit. You can play the titles in any order, and not only that, even within each of the chapters it is possible to face the missions in "free mode" right away, without the need to complete them in order. Even the included extras (for example skulls, modifiers that allow you to vary the experience ranging from making an element of the interface randomly disappear after each respawn to generating a shower of confetti every time you kill a Grunt with a headhost) they can be activated immediately and without any limitations. In fact, this very appreciable setting has the consequence of making the collection obviously suitable for owners of One who have never had the pleasure of playing the role of Master Chief, but above all of give fans a sewn and sewable product tailored to their needs.

1080p, 60 fps and great attention to the problem of controls

The other leitmotiv when talking about initiatives of this type concerns the passage of time and how the titles involved have aged over the years, both from the point of view of mechanics and controls. Given the genre of the four titles, the "controls" issue could be a significant obstacle: the "traditional mapping" of Halo (especially in the first chapters) is fundamentally different from the one now universally used in first-person shooters and cleared by Call of Duty. 343 Industries has also thought about this aspect, introducing the possibility of choosing different control schemes and, for each of these, providing a series of settings that allow you to adapt the One controller even better to the needs of those who play. The icing on the cake, you can either choose a "universal mapping" to use over the four titles or, case by case, save one that is more suitable for the title in use, taking into account the improvements made over the years (e.g. the ability to shoot was only introduced starting with Halo 4). Unfortunately, however, some "seniority" limits remain in the older chapters, such as the aforementioned lack of shooting in the first three chapters and other mechanics that are now common practice when it comes to shooter, however physiological when it comes to titles with some white hair under the helmet. Finally, from a technical point of view the proposed titles reach the infamous 1080p and guarantee 60 frames per second, with the exception of Halo 2, which while maintaining the same frame rate runs at a resolution of 1328 × 1080.


The first love is never forgotten

Halo: Combat Evolved is a repurposed piece of history

The playful offer, of course, opens with Halo: Combat Evolved, originally released on the first Xbox and revived ten years after its release (November 15, 2011) in the Anniversary version on Xbox 360. As in the first Anniversary edition, it is possible to switch at any time to the “vintage” look of the original for Xbox (and obviously return to the “2014 version”) by pressing the Back button. The same treatment is also reserved for the sound, also in this case being able to range between old and new. Net of the "identity card" defects expressed above, Combat Evolved stands the test of the years well (despite some graphic glitches often peeps out), thanks also to his having made school with regard to some setting choices of the modern first-person shooter.

Halo 2: Anniversary is a bit like the Mona Lisa of the collection

By the developers' own admission, Halo 2: Anniversary is a bit of the Mona Lisa of this Louvre which is the Master Chief Collection: in addition to all the original content, there are an hour of completely remastered films (by Blur Studios) to compose the cutscenes of the title, which have very little to envy to a film product. Choice that we must admit to be spot on especially in light of the particular narrative structure originally set up by Bungie for Halo 2, with two narrative strands that start from opposite ends (allowing you to fight both among the ranks of the UNSC as the Chief and on the front of the Covenant impersonating the Arbiter) and then cross over at the end. Also in this case there is also the possibility to switch from the remastered version to the original and vice versa, while from the point of view of playful performance we start from the excellent basis of the first chapter by introducing new goodies (the possibility of holding two weapons at a time or that of "swapping" the gun with an ally without necessarily having to kill him to steal it) that improve the overall experience. [nggallery id = "197 ″]


3 is the magic number

Halo 3 closes the "first trilogy" of the Cape

For Halo 3, the first chapter of the series to be released originally on Xbox 360 and the last chapter of the main series developed by Bungie, the remastering work was obviously less "invasive" both in terms of graphics and sound, making the possibility superfluous. to change the in-game version (in the first two chapters in fact the differences are much more marked). Compared to the previous two, the novelties record the debut of the equipment, particular devices with various capabilities (ranging from the Bubble Shield, capable of completely shielding an area from bullets and at the same time preventing the enemies from being shot outside it, up to to the Gravity Lift).

Halo 4 is the most technically successful title, at the level of current next-gen products

The last canvas on display corresponds to Halo 4, the first chapter of the series following the "schism" between Microsoft and Bungie and then developed by 343 Industries (the curators of the collection). From the point of view of remastering, the same arguments made for Halo 3 apply, including the absence of the "swtich" between old and new. In any case, the final result is definitely at the level of the productions currently available on the market, while from the point of view of the mechanics, as mentioned, the shot makes its debut in the "numbered" series and some more modern components are introduced (for example, the possibility to use the jetpack). Spartan Ops will also be added to the offer in an update scheduled for December, of the co-op missions released in episodes in the original Halo 4.

This paragraph was added on 11/11/2014 after having tried more thoroughly the playful package linked to multiplayer, added with a patch released the day before the expiry of the embargo Even playing online it is easy to find what you are looking for

That of multiplayer is, since the origins of the series, one of the workhorses of the title. The Master Chief Collection obviously couldn't be outdone, and it does not just "feed" the player with the maps taken from the multiplayer modes of the four proposed titles, but (as seen for the campaign) organizes them so that the amount of content is accessible in the simplest possible way. Everything is organized in playlists (which 343 Industries promises to update and adapt to the tastes of the players, who will make their preferences weigh through the "numbers" of presence in these) that allow you to play the maps of a only title that instead pass from one end of the experience to the other while playing. Custom games are then grafted onto this skeleton, allowing you to tailor the experience by choosing rules and maps and which find their strength in the endless number of possible combinations. The Forge is also back in vogue, a tool that allows you to create and modify maps (also from a "geometric" point of view), supported by Halo 3 and Halo 4 and extended, an absolute novelty, also to Halo 2: Anniversary, which boasts from this point of view also some additions aimed at allowing a faster creation of contents and some unprecedented freedom for “creatives”.

A few too many problems for the co-op

To close the picture in a bitter way, however, intervenes the other half of the multiplayer component, the one linked to the split-screen campaign: regardless of the title that you decide to face in the company, the frame rate in any case suffers the blow, with making the final result less brilliant than the splendid work done on all other aspects of the collection. In any case, we remain within a certainly acceptable "tolerance range", but regret that the cooperative does not make it to its full potential.

Verdict 9.5 / 10 Basically the Bible. From today also on Blu-ray Comment Halo: The Master Chief Collection, at least as regards the solo offer, can only leave satisfied. The approach chosen, which leaves the keys of the museum in the hands of the player (free to play the four titles practically as he prefers) and the care with which the potential "loose mines" due to controls have been dealt with (from a "personal ", but also taking into account the differences between one chapter and another) can only be rewarded and, ultimately, they create a playful package of the highest level, capable of entertaining for hours and hours. Pros and cons ✓ Lots of content
✓ Total freedom of use
✓ Intelligent approach to the problem of controls
✓ 1080p and 60fps for everyone x The weight of the years sometimes makes itself felt
x Some graphic glitches, especially in the first titles
x Framerate in trouble when playing local co-op
Do you want to be a video game expert and know all the tricks, guides and reviews for your video games ? Holygamerz.com is a group of video game fanatics who want to inform you about the best tricks, guides and tips. We offer you the best information to be a reference in gaming, so here you can find guides, tricks, secrets and tips so you can enjoy your games to the fullest. Are you ready to get all the achievements of that game that you resist so much? Enter now and enjoy your favorite video game to the fullest!
Guitar Hero Live Review ❯

Ni no Kuni Review: The Threat of the White Witch

Add a comment from Halo Review: The Master Chief Collection