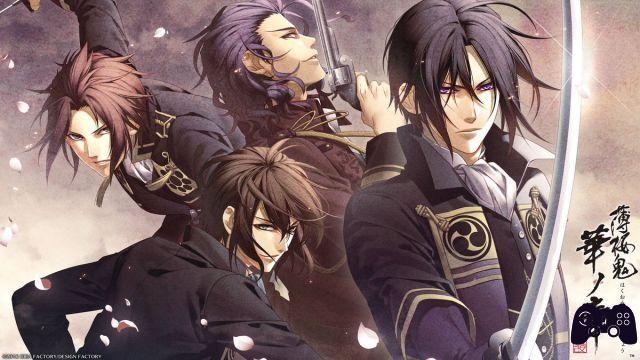 On May 16, 2017, the first part of the remastered version of Hakuoki arrived in Europe on PlayStation Vita under the name of Hakuoki: Kyoto Winds. The Otome franchise of Idea Factory International samurai-themed has been able to capture the attention of the public with anime, manga, drama-cd, live action movies, offering charismatic characters and a captivating plot. Hakuoki: Edo Blossoms takes the story from its predecessor to illustrate the second part of the story on PS Vita and PC exactly one year later. If you haven't played Kyoto Winds yet, we invite you to read our review before continuing with the next lines on Edo Blossoms. Read on to find out what we think of this Visual Novel. 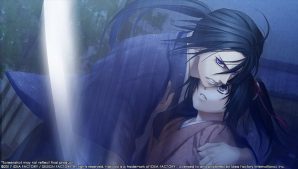 At the end of the events narrated in Kyoto Winds, in particular the heavy defeat suffered in the battle of Toba-Fushimi, Shinsengumi is forced to leave Kyoto to go to Edo. At this point in the story the protagonist Chizuru Yukimura will have developed a emotional bond with one of the warriors who, with a few exceptions, will have turned into a so-called Fury, creatures with superhuman strength and speed, as well as an unmatched wound healing ability. In return they develop an intolerance towards sunlight and one thirst for blood more and more insatiable, to the point of driving them to madness. The protagonist will not only have to deal with the psychological side of the man she chose, but also with countless battles that follow one another to try to overturn the fate of the war: unfortunately, Chizuru soon realizes that the era in which clashes were won with the strength of courage alone, a good strategy and the sword has come to an end. L'West it has in fact allied itself with the supporters of the empire and helped to spread new tactics e new armaments, including cannons and pistols. Shinsengumi remains loyal to the shogunate forces but the war turns in favor of the pro-imperialist forces. As if that weren't enough Kodo Yukimura, father of the protagonist, has managed to strengthen her own Water of Life to give life to even more powerful Fury, able to stand in the sun without feeling pain and, most importantly, infusing them with knowledge of the art of war and discipline.

Who will make it out alive in this whole story? And what happened to the demon Kazama? The arduous task of discovering it by playing is up to you, exploring a much more intriguing and agitated plot than Kyoto Winds from different points of view depending on the chosen route. As in the previous chapter, we recommend starting with the plot of Hijikata since he is the main protagonist and his route is the only one to explain the meaning behind the title of this game.

In the midst of chaos, there is also opportunity

Hakuoki: Edo Blossoms, like its predecessor, is one Visual novel of classic mold and therefore will be present mountains of text ed reduced interactions. There is no possibility of import rescues directly from the previous chapter, allowing the New Game to choose the name of the protagonist and one of the warriors with whom to weave a relationship. In case you haven't played Kyoto Winds or some time has passed since the last time, a convenience has been introduced Prologue chapter which in a few lines summarizes what happened in the first half of the story, differentiated according to the companion selected to start the adventure. After the short introductory session, the plot will pick up where it left off, that is, immediately after the battle of Toba-Fushimi: however, unlike the original title released on PlayStation 2, Hakuoki: Edo Blossoms contains added to the dialogues and different new routes, dusting off a franchise that celebrates its year this year tenth anniversary and instigating the player to find all possible material relating to Hakuoki.


The functionalities remain the same as in Kyoto Winds, but in this chapter you will need to pay special attention to four choices that will dictate the course of the whole plot: warriors transformed into Fury will suffer because of the bloodlust that afflicts them and Chizuru will have to choose how to handle the situation offering them his blood, a medicine able to suppress the harmful effects of the Water of Life or letting that bear the pain. Each of the three options will affect the level of corruption of the companion and, if this is too high during some plot events, you will inevitably run into a Bad Ending.

To be able to reach the coveted Good ending it will therefore be mandatory to fully develop the relationship and be careful to balance the corruption resulting from the status of Fury.

Fortunately the Record of Service allows you to restart the game from any point by manually setting the affinity and corruption with a given character once the first playthrough is finished, making it possible to explore the different endings without difficulty to unlock all the images and achievements.

The title does not present drops in FPS and the refurbishment of the interface is at the same level as Kyoto Winds. Unfortunately it was detected some typos in the text, which in all likelihood will not be present in the version of the title intended for the public.


The greatest victory is that which requires no battle

New-entry in the family Otomate, Hakuoki: Edo Blossoms is aimed at a mainly female target so the characters were designed in such a way as to be each immediately recognizable and fascinating, reflecting typical personality traits. Given the great variety of routes proposed, it will be inevitable not to find at least one preference at first sight. For consistency with the arrival of the new troops on Japanese soil, the Shinsengumi uniform is abandoned in favor of typical Western clothes and some male protagonists will also suffer a drastic haircut. The backgrounds and pictures CGI they rise to the occasion and enrich the gaming experience together with animations and to sound effects: the soundtrack is balanced with skill, managing to instill the right level of restlessness and to reassure the player when necessary, helping him to imagine the missing elements on the screen without any difficulty.

Who chews littleEnglish may encounter some difficulties playing this title, as the lyrics are rich in slang ed colloquial expressions not always easy to understand. THE Japanese terms instead they are included in theintegrated encyclopedia, accessible with a simple press of a button every time a word highlighted in red appears, thus avoiding having to search for translations on the fly to contextualize the concepts.

In Hakuoki: Edo Blossoms la skill of the voice actors stands out even more, especially during the most touching and raw scenes: we assure you that remaining indifferent to the screams of pain and suffering of your partner is really difficult, as it is very simple to have fun and breathe a sigh of relief when the atmosphere is more quiet and "playful". Thanks to a perfect combination of all these ingredients, the title is by no means obvious, banal or mushy, making it in our opinion also suitable for the male audience.

Verdict 8.5 / 10 Once grasped, the opportunities multiply Comment Hakuoki: Edo Blossoms sucks the player into a very excited plot full of battles for the survival of the Shinsengumi and in each of these there is the concrete possibility that some of the characters more loved ones lose your life. With such a brutal premise it seems impossible to be able to frame a love story, yet these samurai manage to attract the attention of the reader, who can not help but get carried away by the plot and see where fate will lead him, developing different types of report. The supernatural element in this second part is more present than ever, giving the title an extra boost that differentiates it from other representations on Shinsengumi. Hakuoki: Edo Blossoms deserves a much higher grade, but the choice to divide the story into two separate parts completely breaks the pace, making it almost useless to play Kyoto Winds given the presence of the initial summary and the no need to restart the game from the very beginning to enter the correct route, being able to choose it directly in Edo Blossoms. Pros and cons ✓ Plot and characters based on real facts
✓ Supernatural element
✓ New routes
✓ Independent of the first half x It still remains a half
Do you want to be a video game expert and know all the tricks, guides and reviews for your video games ? Holygamerz.com is a group of video game fanatics who want to inform you about the best tricks, guides and tips. We offer you the best information to be a reference in gaming, so here you can find guides, tricks, secrets and tips so you can enjoy your games to the fullest. Are you ready to get all the achievements of that game that you resist so much? Enter now and enjoy your favorite video game to the fullest!
Super Mario Maker 2 Review: Build-a-me, Mario! ❯