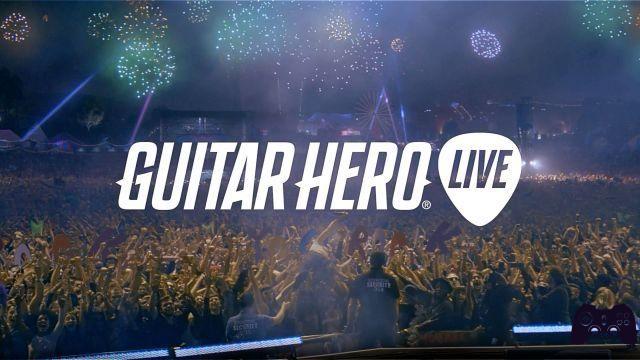 After the boom of the first chapters and the birth of the rival Rock Band, the series of Guitar Hero it has stalled undergoing a slow and inexorable decline, so much to bring Activision to bench the brand. The annual serialization had led to a lack of real ideas, and a continuous copying of each other with the "eternal" antagonist, so much so as to make the two games almost identical, both in mechanics (arrived to cover all the instruments of a band ) and in the tracklists. After a long pause (the last chapter dates back to 2011) Guitar Hero is ready to make a comeback with a new episode, this time curated by the talented FreeStyleGames, former authors of the two DJ Hero. Here is the review of Guitar Hero Live.

It is useless to hide behind a finger: Guitar Hero needed a restyling work necessary to rekindle in the players the passion and interest in this guitar rhythm game. While 2015 also sees the return of Rock Band 4 trying to re-propose a fairly classic experience of the genre, Guitar Hero Live decides to take a risky but in our opinion winning path. FreeStyleGames has courageously chosen to review the gameplay that has been tested over the years and to rewrite the approach to the genre, with a solution at first impact that is not so immediate, but effective in the long term.

In Guitar Hero Live debuts a new guitar designed ad hoc, no longer based on pressing the 5 colored buttons in succession, but introduces a new 6, divided on two lines. Here, between the upper and lower chords, identified by the colors Black e White, we will have to press with the right timing the buttons that will appear on the screen using also the strum, which will be used to make the note. These will scroll on the screen in fall on the dedicated lane, and depending on the chosen difficulty, there will be more or less chords to be performed, both on the same row, and combinations of different strings, more complex to be performed. We will then find the Closed off, to play them we will have to press two frets in line at the same time, or the open strumming, which as the name suggests, will involve only with the strum, leaving the frets alone. Not even an old acquaintance is missing, it Star Power, here renamed in Hero Power: after playing the special notes to perfection and filling the indicator, tilting the guitar upwards will activate this power which will allow us to multiply our score and get dizzying records. 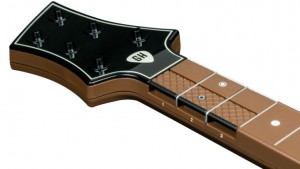 The new scheme put up by FreeStyleGames from the first minutes appears much easier to master for those approaching the series for the first time, but also a greater challenge for the veterans of the series, who will not only have to learn to play again, but also adapting to the higher level of challenge proposed, which as we increase the difficulty, will require the player more and more virtuosity and constant concentration in order not to miss a single note. The downside to all of this is that, contrary to the philosophical choice made by Rock Band 4 to make the old instruments belonging to the previous generation compatible, in Guitar Hero Live we will necessarily have to rely on the new controller, making the old into pleasant (and invasive) vintage accessories.

In Guitar Hero Live there is not only a gameplay reset, but it is done a skimming action also in the game modes and in their development. Abandoned the variations on the theme that led to experiment each member of the band with their respective instruments, with this new chapter we focus again on the role of the guitarist as the "star" of the group and, following this renewed line of thought, the single player mode is was built to make us feel the protagonists of a real concert.

The mode Live it will divide us between the UK and the United States in a series of concerts within two major festivals: our role will be to turn on the public thanks to our “schitarrate”. Playing without making mistakes will send your fans into ecstasy, who will rejoice and sing the songs with us, while if we make mistakes they will start to get annoyed, to whistle or throw us at something. Also the reactions of the band will vary according to our performance, all in real time, thanks to an excellent video editing work carried out for the creation of the graphic part, which abandons the cartoon style of the previous chapters for the "live" shooting of concerts, seen by us in first person that will make our very realistic and immersive stage experience. 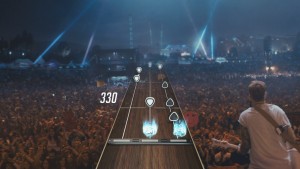 The single player campaign consists of 42 tracks, a number not too exciting when compared with the tracklists of previous Guitar Heroes, but large enough to offer all aspiring guitarists a good variety of genres and artists, ranging from indie rock to groups like the Imagine Dragons (Demons), OneRepublic (Counting Stars) e The Lumineers (Oh Hey) to more pop and commercial pieces of Rhianna (California King Bed), Katy Perry (Waking Up In Las Vegas) and Avril Lavigne (Here's To Never Growing Up) to get to historical pieces from bands like the The Who (Won't Get Fooled Again) oi Queen (Tie Your Mother Down).

To compensate for the shortage of songs available on disc, however, the new mode takes care of it Guitar Hero TV that promises to be a breath of fresh air in the gaming landscape on consoles for rhythm games. Winking at what was there Mtv of the golden times, will propose two non-stop thematic channels 24/7, where it will be enough to log in and start playing the programming on the air and who will enjoy their own musical schedule that will change from hour to hour throughout the day. This mode, daughter of the recent on-demand streaming services such as Netflix o Spotify (remaining in the musical field) will offer the player two options of use: free, playing the songs in rotation or for a fee, by purchasing day passes with a not very low price (€ 5.99) which will make everyone present in the catalog free for 24 hours. Those who decide to take advantage of the advantages offered by the free plan, will still be able to access the collection by spending some tokens, which can be earned by playing or leveling up, and which will unlock the piece to be played once.

The microtransitions are never necessary and it is possible to take full advantage of this mode even without putting your hand to your wallet and resorting to Guitar Hero Cash, exchange currency for the purchase of new tokens or to speed up access to Premium concerts, events that will preview songs that will later be added to the collection. 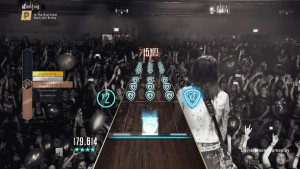 In TV mode we will also be able to customize and enhance our guitar (more or less useful bonus for scoring purposes), as well as the lanes where the notes to play or the business card will be found, our identity in this sort of social music. It will also be possible to challenge other players, but not directly as it happened in previous episodes. In fact, Guitar Hero Live lacks an option dedicated to multiplayer (different on the other hand in Live mode where 2 players will be able to challenge each other locally or accompany a third party who will act as a singer), taking a step back from the past and settling for asynchronous challenges, where we will have to beat other players who have played that song and who have not they are necessarily connected online at that particular moment. A sop, of course, but always better than nothing.

On the technical level, as already repeated we really appreciated the choice made in Live mode to introduce real concert footage made specifically for the occasion, decidedly impactful, while in GH TV the footage will be replaced by the original videos of the songs, which are also functional for play purposes. 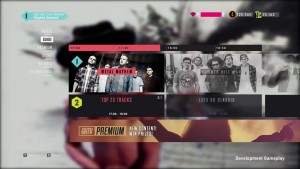 Separate talk for the Guitar Hero Live soundtrack. As always happens in these situations it is difficult to satisfy everyone's tastes, and the tracklist, although it does not shine in number, certainly manages to cover as many musical genres as possible. Where it gives its best is on TV with over 200 songs, a varied collection that will put a patch on the shortcomings of songs from the other modality, and which are updated weekly with new additions.

Verdict 8/10 Splitting the guitar at the end of the concert is not wise Comment Guitar Hero Live convinced us. It is difficult to think about how to renew a genre that seems to have already said everything, and make it attractive again both to the old lever and to the new aspiring guitarists who approach the genre for the first time. FreeStyleGames in this was an excellent interpreter, managing to perfectly manipulate what was the original formula of the series and make it his own. There are shadows, which to date in 2015, we should not find ourselves in front of, above all the lack of online multiplayer, which has always been one of the strengths of the game. The introduction of the GH TV is a winning intuition, despite the massive presence of microtransitions, which fortunately do not oblige in any way to spend more money than the purchase of the game and the guitar. There remains only a doubt about this mode, or how much and how it will be managed over time by Activision, to date a great way to expand the Guitar Hero experience, but which if not properly supported risks making this new incarnation of the simulator fail. most famous guitar ever. Pros and cons ✓ New guitar and convincing fret layout
✓ Great concert video editing
✓ GH TV has great potential ... x ... as long as it is supported over time
x The absence of online multiplayer weighs heavily
Do you want to be a video game expert and know all the tricks, guides and reviews for your video games ? Holygamerz.com is a group of video game fanatics who want to inform you about the best tricks, guides and tips. We offer you the best information to be a reference in gaming, so here you can find guides, tricks, secrets and tips so you can enjoy your games to the fullest. Are you ready to get all the achievements of that game that you resist so much? Enter now and enjoy your favorite video game to the fullest!
News Downswing: WarioWare Inc. Mega Microgames ❯

The Suicide of Rachel Foster review: when you play video games in the hotel with anxiety