Guides The Hoenn event (2021) and its challenges - Pokémon GO 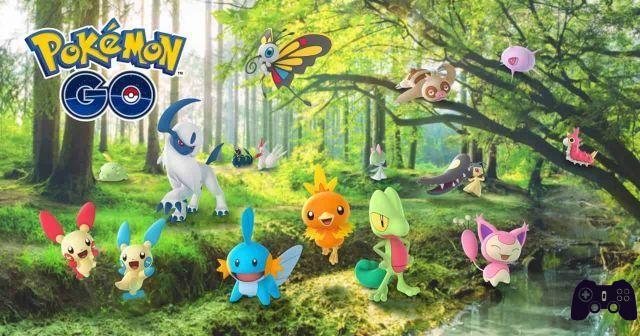 Finish theSinnoh event and move on to the next (previous, actually) region of the lineup. Waiting for the Pokémon GO Tour of Kanto to be held at the end of February we also revisit the region where the events of Pokémon (Omega) Ruby, (Alpha) Sapphire and Emerald took place.

As usual, there is a challenge awaiting us, made up of increased spawns and a new egg pool. But also about collection challenges and demanding timed searches. An old acquaintance will also be able to learn his Legacy move, only during this week. I remind you that theJohto event!

The contents of the event

Let's start from this, because from January 19th to 24th a Pokémon that was the protagonist of an old Community Day will be able to learn its Legacy move again. It is about Metagross, and it is the first time that we will be able to do it learn Meteorpugno again evolving it from Metang out of Community Day. Don't miss the chance, this move is very useful.

Also this week a highly selected lineup of Pokémon will show up more often in the wild. In addition, as always, to the three starters (Treecko, Torchic, Mudkip) we will be able to meet Taillow, Loudred, Nosepass, Aron, Meditite, Roselia, Carvanha, Numel and Baltoy. More interesting, however, are perhaps the 5km eggs, which will hatch Skitty, Aron, Corphish, Lileep, Anorith, Bagon and Beldum. Remember what happens when Beldum evolves into Metang and Metang into Metagross this week?

The raids are also renewed. I level one will host the three starter Pokémon plus Ralts, Aron and Bagon, those of level three instead Breloom, Mawile, Spinda, Grumpig and Absol. It's the first time that Spinda is available outside the field research missions: if you are a collector remember that there are currently 9 forms of Spinda available in GO. However, it is not yet clear whether its already released color variants will be available.

For the event the legendaries split up. From silver eggs they will be able to hatch Kyogre or Groudon, which return to GO after a long absence even in their chromatic forms. No particular moves have been announced for their return.

The collection challenge and the timed mission

What has been announced, however, is a particular timed mission, summarized briefly in the table below. To help us it will be available in the shop a pack containing 3 remote raid tickets!

The final reward (in addition to some Silver Baccananas and some experience points) will be a Rayquaza that knows the Typhoon charged move. The Pokémon can be encountered Shiny, and this move is Legacy - make sure you complete the mission within the week, as it's timed!


Also available - of course - the third collection challenge, which does not include Shadow Pokémon this time. Capture the following Pokémon by the end of the event to guarantee you Silver Berry, experience points and an Aroma.

We conclude with a quick infographic related to themed field research, where you can also find Plusle and Minun to capture for the collection challenge.

It is not known if Nincada will be a frequent spawn or if he will be given a literal hunt: fingers crossed.

New Pokémon Snap: how to get Illumina and Crystal Blooms Orbs on all islands