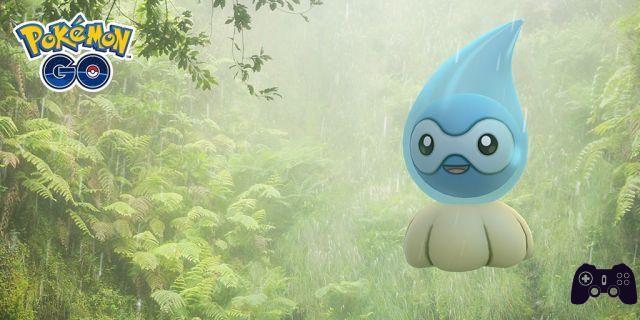 A new event, Climate Week, debuts in Pokémon GO. Dedicated to the climate, it directly follows the end of the Elettromania event. The protagonists will be Pokémon that love rain and wind, such as Wingull. The event began at 10 am today, March 24th, and will run until 20 pm on the 29th. We will see some Pokémon appear that are not very common, and the spawns will take over halfway through the event. Among the appearances also the debut of a new chromatic form, but for more information on the title, consult ours complete guide.

All Pokémon and raids from the event

Among the Pokémon that love rain and wind is Castform. Its rain form will be under the bull's eye during the event, and it will be possible to meet its chromatic form. With little use, Castform is no longer a very common Pokémon to encounter. Available only for the basic shape and now the rain one, the chromatic versions are therefore a good collector's item.

On the map with him will appear Pokémon that love rain and wind, such as the aforementioned Wingull and Ducklett (both not very common). Not only that, the week is divided into two bands that will affect the Pokémon that we can meet:

As always, eggs will also be themed. During the event they will keep the same hatch pool available - which you can also check from the Eggs screen with the recent update. Just click on an egg and scroll down to read which Pokémon are available. In the meantime, here are the ones reported by Niantic.

The raids are also renewed. The megaraids remain the same as last week, and will only give way to successors during the next. The legendary tier is still of Thundurus form Totem. Over the weekend, however, it will be replaced by the good old Rayquaza, available in chromatic form and that for this weekend of special raids will know the exclusive Tifone move. Challenge him from 10 on Saturday to 20 on Sunday. All remaining raids follow.


The missions of the Climate Week

Climate Week also offers a personalized set of field and thematic research. From Pokéstops you can get the following.

As for the timed search, this week is developed in four steps. Starring again the Pokémon Water, Electric, Flying, Beetle - and specifically Castform form rain. Depending on the situation it may take a while to complete, but it is nothing impossible.

Do you want to be a video game expert and know all the tricks, guides and reviews for your video games ? Holygamerz.com is a group of video game fanatics who want to inform you about the best tricks, guides and tips. We offer you the best information to be a reference in gaming, so here you can find guides, tricks, secrets and tips so you can enjoy your games to the fullest. Are you ready to get all the achievements of that game that you resist so much? Enter now and enjoy your favorite video game to the fullest!
Special Generating too much gameplay - a game costs more than 70 € ❯

Fortnite: here are the challenges and rewards included with the 12.60 update, according to the leaks

Add a comment from Guides Climate Week 2021, all raids and missions - Pokémon GO