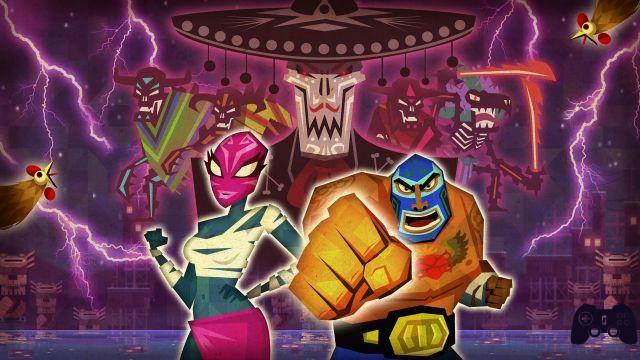 Among the new trends that have taken hold in recent years in the world of video games we find among the most abused that of compulsive sequels, collections or HD ports and revised and corrected versions. It belongs to the latter category Guacamelee! Super Turbo Championship, an indie metroidvania by Drinkbox Studios which only 1 year ago had great success with critics and audiences.
Not happy with the excellent results, the guys at Drinkbox Studios have well thought of propose a third version of the game for next-gen and Xbox 360 consoles, which joins the original and the Gold, exit on PC, a new edition with a high-sounding subtitle and whose name ironically recalls a famous beat'em up series.

Once Upon a Time in Mexico

We had already gutted Guacamelee! in the detailed review by our Luca Martis (which you can read here) who analyzed every aspect. In this new edition little or nothing changes compared to the common thread that will push the good Juan, a quiet and peaceful farmer from a Mexican village called Pueblucho, to embark on a journey with an uncertain future, to save the daughter of El Presidente, kidnapped by the lord of the kingdom of the dead, or the terrible Carlos Calaca just before the celebrations for El Dia de los Muertos. Obtained thanks to a powerful mask the powers of a legendary Luchador, Juan will have to bring his beauty back home by facing a thousand vicissitudes, while at the same time getting rid of the henchmen of the evil lord of the dead.
Like any good self-respecting metroidvania we will be called to explore far and wide every location that makes up the world of Guacamelee !. Each stage will contain some steps that will be impossible to tackle immediately and that require certain skills to be overcome. During the adventure Juan will enrich his move park with some upgrades that will allow him to break new ground by breaking down apparently indestructible obstacles, perform lethal body slams or climb vertical walls thus climbing even the most unreachable peaks. As we continue in the game, each skill will fit in with the previous ones, forcing the player to continuously combine powers to be able to continue in the next area. Not least the possibility of alternating two dimensional planes, that of the living and that of the dead, an element that will affect not only the resolution of some environmental puzzles but will integrate into the gameplay during the numerous platforming phases, which will require skill and timing to overcome.

Backtraching in a genre like this is a must, but despite being present from the early stages of the game, thanks to a story full of interesting ideas and full of decidedly ironic moments, and a refined gameplay, the developers have managed to make weigh little the continual retracement of their steps balancing it very well. Stay of course massive in case you decide you want to complete the game 100% by uncovering every hidden secret, but also in this case we are helped by comfortable teleporters, strategically positioned, which allow us to quickly reach the desired area, saving time.
By gaining the powers of Luchador, Juan can rely on a series of melee attacks to take out Carlos Calaca's endless army of enemies. There will also be holds, which will allow us to get rid of the enemies by literally making them fly around the screen or use them to throw them at the incoming ones. In this edition just the part of the sockets is revised and corrected, improving the final yield making it easier to manage the launch.
Another addition concerns the ability to view the energy bar of the enemies present on the screen, providing us with a quick glance the amount of remaining life, which proves to be quite useful by offering the possibility to focus on the dying ones.

From dusk to dawn

Drinkbox Studios has not only gone to file and refine some elements of a decidedly refined gampley from the very first release, but also introduced new mechanics such as the presence of the "intienso" mode, a sort of berserk phase that can be activated after filling a special bar by defeating enemies, which with the simultaneous pressure of the analog sticks allows you to unleash all the strength of Juan, eliminating all the adversities on the screen in a flash. Although this makes the adventure more affordable in its entirety, the integration of this last mechanic within the game allows you to take a breath of air every now and then without going to undermine the final yield. And in case anyone finds this all too easy, a new level of difficulty also enters the scene, which however becomes available only after completing the game, an element that if introduced at the beginning of the adventure would certainly have raised the replay value of those who have already played one of the previous versions.
Speaking of content, this final edition (hopefully) of Guacamelee! offers in a single package in addition to the revised and corrected game also all the contents released previously, such as the El Infierno expansion, a collection of decidedly tough challenges to complete and costumes for Juan, which in addition to modifying their appearance alter their abilities, depending on the one used on the stamina, vitality or power of our protagonist. There is also no shortage of unpublished content, such as two new areas to explore and a new boss fight with the terrible El Trio de la Muerte to entice those who have already had the opportunity to play the adventure of throwing themselves back headlong once again.
Guacamelee! Super Turbo Championship, in this latest incarnation is available at a price of € 13,99 on the stores of the respective consoles. While on Xbox One the game is available in July free of charge for Gold subscribers, on the Sony store instead, a promotion is active for owners of the original title which lowers the game to € 3,99, plus another 10% in the case of PS Plus. Full price instead for Wii U, which however unlike the other consoles offers the chance to play the Guacamelee! on GamePad via Offscreen Play, or more interesting than using the screen of the "paddone" to view the game map, which in a metroidvania is always very convenient and solves the problem of having to interrupt the game to access it.

Colorful and stylish, even the graphic sector sees the addition of new video effects that further embellish the view. The level design is unassailable, which in every part offers style lessons, with a development of both horizontal and vertical areas, all conceived ad hoc to accommodate passages to be studied to the millimeter before being addressed, over and over again. Difficult, true, but if completed they repay the player in an incredible way. There are numerous more or less hidden quotes, primarily towards Metroid himself, bringing up (with sagacity) the most varied videogame series. The animations also show the hard work and dedication on the part of Drinkbox Studios to make the movements of Juan and all the protagonists of the game fluid and almost perfect. The same can be said of the sound sector, which sins in the absence of a dubbing relying only on the textual part during the dialogues, while for the music, inspired by Mexican folklore themes and motifs they intertwine with electronic sounds creating an eclectic sound but at the same time fascinating and in line with the work.


Verdict 8.5 / 10 It's like Samus but with two maracas like that! Comment Guacamelee! Super Turbo Champion Edition is the definitive version of Juan's adventures. Those who have not had the opportunity to try the Drinkbox Studios game until now have no more excuses, since we are facing the best edition among those releases. On the other hand, for those who have already dabbled in the game, silencing the perfidious Carlos Calaca will have little incentive to want to put his hand on the game again, given the lack of new thickness that may entice the purchase in the first place. For all the others an indie title to try absolutely Pros and Cons ✓ Revised and corrected version
✓ New content x Few stimuli for those who have played a previous version

Do you want to be a video game expert and know all the tricks, guides and reviews for your video games ? Holygamerz.com is a group of video game fanatics who want to inform you about the best tricks, guides and tips. We offer you the best information to be a reference in gaming, so here you can find guides, tricks, secrets and tips so you can enjoy your games to the fullest. Are you ready to get all the achievements of that game that you resist so much? Enter now and enjoy your favorite video game to the fullest!
The Banner Saga 3 (Switch) Review - Even the greatest stories end ❯