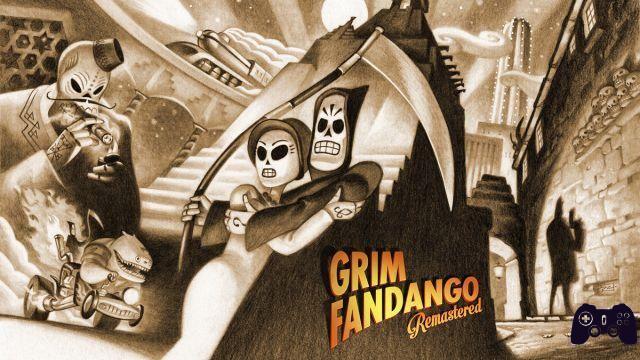 Almost prophetic are the words that the good Tim Schafer wrote as the first line of dialogue for Grim Fandango, back in 1998, and which, with a touch of irony, are pronounced seventeen years later, at the dawn of the first digital release, in remastered version, of the brilliant noir adventure created by the Double Fine boss.

As the grim reaper / travel agent Manuel "Manny" Calavera, we will once again embark on the four-year journey of the soul, which will lead us to (re) discover sinister conspiracies, tragic loves and the unhealthy passion for engines and high speed of a certain overgrown earth demon.

But above all that if the afterlife is terribly the same as the afterlife, death is only the beginning of trouble ...

THE FIRST DAY OF YOUR DEATH

For longtime fans, there's little to be said at the plot level: Grim Fandango is one of the latest titles, and probably one of the best, from the golden age of graphic adventures. The fans of the last minute, however, will not be able to help but let themselves be captivated by film noir atmospheres of the first half of the 900th century, transposed with Schafer's typical ironic lightness to the afterlife of the Land of the Dead.

As already mentioned, the plot follows most of the clichés of Humprey Bogart's films, from Casablanca to Il Falcone Maltese, seasoned with a strong dose of black humor and a decisive stylistic drift towards New York Art Decò and Mexican folklore. The task of the dead is to cross the Land of the Dead on a perilous four-year journey, which can be shortened or made safer by purchasing one of the available travel packages. Better chances correspond to a more correct and honest life, up to the coveted Numero Nove, a train with golden tickets that makes the journey in four minutes. 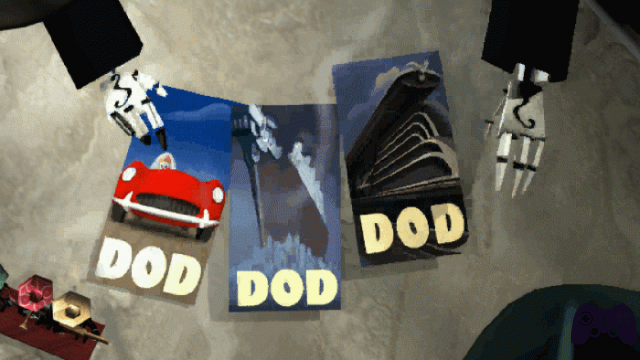 The task of the agents of the Department of Death (a curious hybrid between the immigration office and the travel agency) is to make the recently deceased spend as much as possible for the best package, so that they can in turn pay their sins in life and have access to the Ninth afterlife. Among these we find the good Manuel Calavera, once a top seller, whose glory days are long gone, stuck with miserable customers and unable to sell anything. The choice to steal a customer (the beautiful Mercedes Colomar, Meche for friends) from his colleague and rival, Domino Hurley, it will throw Manny's non-life into utter chaos, until the discovery of a criminal conspiracy that threatens to compromise the entire system of the Land of the Dead forever.

SO MUCH ENJOYING THE TRIP

Graphically, seventeen years is hard to endure for a video game title, especially for a cool third dimensional title. Grim Fandango, like many of his contemporaries of the genre,

was able to render the illusion of three-dimensionality thanks to pre-rendered backdrops on which invisible "passage blocks" were applied, delimiting the areas passable by the players. However, while overall the whole atmosphere of the Land of the Dead (from the city settings of El Midollo, to the majestic Aztec pyramid that acts as a portal to the Ninth Beyond) has withstood the passage of time well, taken individually, the various scenarios are affected by their date of origin. Fortunately, Double Fine's effort to modernize the game is substantial, as is the effort of Tim Schafer & co. inimplement innovations that derive in part from collaboration with fans.


Among these are gods new control systems, which help transform the pleasant contextual interaction system of Grim Fandango in a real point and click. Originally, in fact, Schafer voluntarily avoided a "classic" approach, completely eliminating the user interface that had been used with excellent results in the previous Full Throttle and The Curse of Monkey Island. In its place, Grim Fandango allows players to interact with various scenic elements (usually in relief from the pre-rendered backdrop), following the movement of Manny's head. Thanks to the fanmade mod implemented by Schafer in the remastered version, however, the resulting dual control system results in a enjoyable gaming experience for both veterans and newbies to the genre, and especially for the latter especially if weaned with the recent revival of adventure games.

Another improvement, which definitely contributes to mitigate the older graphics of the pre-rendered sets is theinclusion of dynamic lights and high definition textures for the various polygonal models of objects and actors. The result is a less clear break between the various cutscenes and the actual game experience, together with a better integration of the protagonists in the setting sets, making the characters more like the real calacas (the figurines in the shape of a dressed skeleton typical of Mexican culture, and on which the design of the game is based).

Furthermore, the best use of the play of light allows Double Fine to avoid the marked contrasts, which existed in many sets with wide-field shots, between actors and backgrounds, which originally resulted in a strong decrease in immersion. An example among all is the clown of the Fair of the Dead, in the El Medollo of the first year: in the version of '98, the bright colors of the character were so visible even in the overview of the fair that the need to interact with them was evident, and it captured the player's gaze, distracting him from the scenography of the shot. Applying a dynamic light, in this case, made the clown model more opaque in the wide shot, blurring it with the 2D elements of the backdrop without breaking. Similarly, the transition from pre-generated to dynamic shadows eliminated many situations in which the protagonists' faces and expressions were obscured by a black area, replacing them with more natural chiaroscuro. 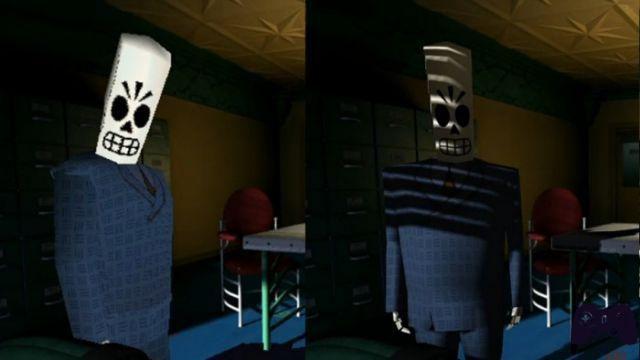 Obviously, as already happened also in the remastered Monkey Island and LeChuck's Revenge, also in Grim Fandango it will be possible disable visual changes, and switch to the original version at any time with the push of a button.

ARE THERE MESSAGES, EVA?

However, while the previous points are mostly addressed to a new user, for which it is necessary to create a gaming experience closer to current standards, both in terms of gameplay and visuals, Double Fine has also thought of some goodies for more players. nostalgic, or those like myself who already have several visions of the final movie under their belt. For this type of user, the main dish of Grim Fandango Remastered is definitely adding developer audio commentary, which can be activated from the extra menu included in the main one, divided into many short audio sequences that can be recalled with a button at certain points. 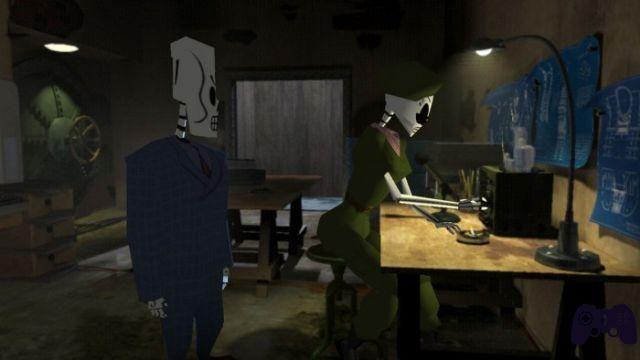 Thanks to this structure, the experience is transformed considerably, from simple viewing and interaction with the game world to a sort of "behind the scenes" parallel to the actual action. You pass by

small indiscretions on cut contents, behind the scenes on the birth of particular characters and situations (memorable is the account of how Schafer essentially demanded the inclusion of an enigma in the third year of the game in memory of an elevator stunt at the time of college), or even real explanations of the puzzles with a lot of the sequence of actions to be carried out to overcome them, although the latter case is very rare and still used in order to inform the player of some production details. From this point of view it is a winner the goliardic atmosphere of the Double Fine team, which manages to present more technical details in a light and fun way, without boring the player.

Clearly it is not an extra recommended for newbies, because it diverts the main focus of attention from Manny's real-time events, however it is almost essential to keep the interest alive on the part of those who, after seventeen years, almost remember the various puzzles.

To top it all off, as icing on the cake, is the addition of new audio arrangements of the already excellent soundtrack, created for the occasion by Melbourne Symphony Orchestra.

Verdict 8.5 / 10 Never seen so well preserved corpses! Comment For many 90s players, like myself, Grim Fandango's Land of the Dead, with its surreal and perfectly characterized characters, cynical but light jokes, and excellent direction of the LucasArts era have become a part of definitely precious memories, and returning to relive the tragicomic four-year journey of the soul together with Manny, Meche and the cute mechanical demon Glottis was a blast from the past. Dive made very pleasant by the remarkable attention to detail given by Double Fine in the remastered version, which files some of the main defects of the original, and modernizes just enough to present a fluid gaming experience that is barely affected by seventeen years on the rump , without however distorting the atmosphere of the already very valid original material. Great is the addition of comments, which offer a new perspective to longtime players, making them feel part of the backstory of the game with an experience that sounds almost like a thank you from Schafer & co. to the fan community. Unfortunately, at least in the tested version, there are some recurring bugs that make it almost impossible to view the cutscenes. On these, however, we suspend the judgment as Double Fine has already warned of a day one patch which, at the time of writing this review is not yet available. Adding to the problems is a slight, but annoying tendency of the new point-and-click interface to activate the developer audio commentary with every mouse click, anywhere on the screen, forcing players to choose whether to use the new configuration. or play with developer commentary in the background. Also in this case, of course, the bugs could be fixed by the day one patch, and, unlike the problem with the cutscenes, this is not an issue that prevents you from fully enjoying the excellent title. Pros and cons ✓ Dynamic lights that favor immersion
✓ Comments Especially nice developers for old fans
✓ New mouse interface for newbies
✓ High quality direction and screenplay x Pre-rendered backdrops are affected by age
x Some interface bugs
Do you want to be a video game expert and know all the tricks, guides and reviews for your video games ? Holygamerz.com is a group of video game fanatics who want to inform you about the best tricks, guides and tips. We offer you the best information to be a reference in gaming, so here you can find guides, tricks, secrets and tips so you can enjoy your games to the fullest. Are you ready to get all the achievements of that game that you resist so much? Enter now and enjoy your favorite video game to the fullest!
Firestorm News: Battlefield V Battle Royale Mode Details ❯