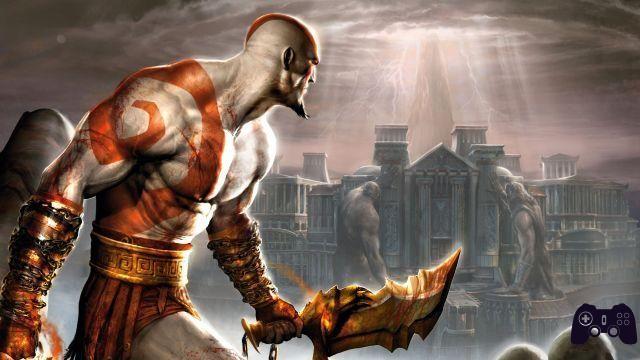 The now obsolete Playstation Portable during its life cycle has benefited from two spin-offs linked to one of Sony's "historical" intellectual properties such as God of War: Chain of Olympus and Ghost of Sparta. On Playstation Vita on the other hand, despite the space dedicated to other portable home-console franchise excursions, this box in the lineup remained empty until May 8, the release date of the God of War Collection also on the new generation of handhelds. . After a convincing debut but foreshadowed by some technical problems with Jak and Daxter and a second attempt with Sly Cooper (without forgetting the contribution of third parties in this sense) the Japanese giant tries again by focusing on one of its best-known icons and relying on Sanzaru Games, now real experts when it comes to such products. How has Kratos fared behind PSVita's OLED display?

The first title proposed by the collection is the original God of War, debut of the series on Playstation 2 dated July 2005. The story begins (almost to recall the classics of Homer) in medias res, showing the player a Kratos on the verge of ending to its existence by jumping from the highest mountain in Greece. At this point the narrative will rewind up to three weeks before, getting to the heart and telling the life of the protagonist during his "last mission" in the service of the Gods and his revenge against Ares, guilty of having forced Kratos to deceive killing his wife and daughter and thus causing the nightmares that have plagued the anti-hero for years. Nightmares from which he hopes to be able to free himself (it should be said) by the grace of the same Gods for whom he acts ...

Gaia, the planet that is alive!

The offer continues (and runs out) with the second chapter linked to the events of Kratos, who has now become God of War at the end of the previous chapter. Despite having received forgiveness for the sins that had tormented him in previous years, the Gods did not free the Spartan from his ghosts, which continue to haunt him still. During a battle within the city of Rhodes, the new divinity is forced to intervene to give a hand to his army, finding himself facing none other than the Colossus of Rhodes. In order to defeat this warlike representation of one of the seven wonders of the world, Kratos will be forced to resort to the Sword of Olympus, which will absorb his powers, turning him into a mortal. And it is precisely at this point that Zeus reveals his cards and kills the Spartan, able to save himself and escape Hades thanks to the providential help of one of the Titans, Gaia. Once again, therefore, Kratos's work will be aimed at revenge and the aim is to eliminate a divinity, with the difference that now the goal is the father of all the Gods.

On the front controls, except for the lack of rear triggers, there are no particular differences with the original counterparts on Playstation 2 and with the subsequent remastering in high definition on Playstation 3: the square button is dedicated to the use of the Blades of Chaos for normal attacks, while the triangle button allows the execution of heavy ones. In addition to alternating these two actions, Kratos's basic moveset includes the ability to jump (X button), parry with the L button and dodge with the right stick. To these actions are then added the skills obtained from time to time in the field, interchangeable thanks to the use of the directional arrows and operable with R. To complete the equipment there are the (few) differences with the two domestic counterparts, who see using the rear touchpad intelligently for secondary actions like opening chests and some icons on the touchscreen (positioned quite carefully) to activate some of Kratos' abilities, like the fury of the Gods. But if the adaptation on the control front is successful and adequate, a separate discussion must be made for the technical sphere of the product: in addition to the problems due to the excessive compression of audio and cutscenes already seen in the Sly Trilogy, the number of images must in fact be taken into account. to the second halved compared to what was seen on Playstation 3, passing from 60 to 30 fps also subject to some drops, especially when it comes to the first chapter, in particularly demanding situations from the point of view of enemies on the screen. However, the situation improves, as mentioned, once grappling with the proposed second chapter, which despite the framerate halved here too shows decidedly less evident signs of failure from this point of view. Problems that still remain within the tolerable sphere and do not make the product less playable, but still mark a certain step back from the same offer on the "big sister".

The presence of the Cross Buy for the digital versions of the God of War Collection intervenes, almost by tradition, to meet the technical inferiority of the product: whether you buy the version for Playstation Vita or its counterpart for Playstation 3 through the Playstation Store, you will also receive the other one for free. As usual, therefore, for all those already interested for whom the digital format is not an obstacle, the invitation is to take advantage of this option, while for all the others it remains a product that despite a certain inferiority compared to the living room counterpart is still all height of the task of reviving two classics of the Playstation 2 era.


Verdict 7.5 / 10 Ghost a little in the shade Comment After the good work (movies apart) with the raccoon thief trilogy, Sanzaru Games partly betrays expectations by churning out a product that certainly lives up to the name it bears but partly overshadowed by more fluid and performing domestic version. However, the Cross Buy allows you to recover both versions at no additional cost, putting the proverbial "patch" to the problem, while not eliminating it at the root. Ultimately, this second revival of the first two chapters of God of War remains an opportunity not to be missed to discover (and rediscover) the exploits of the Ghost of Sparta, also thanks to the budget launch price Pros and Cons ✓ 2 classics from the Playstation 2 era
✓ Careful implementation of touch controls
✓ Cross Buy x Generally smoother on Playstation 3
x Overly compressed cutscene

Do you want to be a video game expert and know all the tricks, guides and reviews for your video games ? Holygamerz.com is a group of video game fanatics who want to inform you about the best tricks, guides and tips. We offer you the best information to be a reference in gaming, so here you can find guides, tricks, secrets and tips so you can enjoy your games to the fullest. Are you ready to get all the achievements of that game that you resist so much? Enter now and enjoy your favorite video game to the fullest!
My Friend Pedro review, the crazy side of a platformer ❯

Shadow of the Colossus review