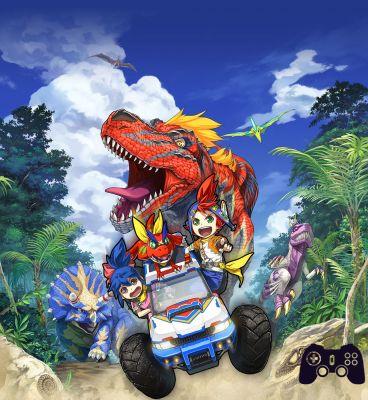 Often Western players are used to complain about the non-arrival of certain series in our country, either because of the rights, or because they would not sell enough, in recent years only some production companies have wanted to take risks by bringing the new series chapters that remained unpublished until past generation. Some striking examples are Oreshika: Tainted Bloodlines (second chapter), Conception II (second chapter) and Akiba's Trip (second chapter again), the same unfortunate fate has gripped the Fossil Fighters series, born in 2008 on Nintendo DS and never reached Europe (while North America was more "lucky") until the third chapter Fossil Fighters: Frontier, out for Nintendo 3DS on May 29th. Will this prehistoric title developed by Red Entertainment and Spike Chunsoft manage to dig a place in our digital hearts?

Let's clarify it now, Fossil Fighters: Frontier is an RPG that takes inspiration from Pokémon in many ways. The protagonist (male or female) will have to dig for fossils to increase their collection of Vivosaurs, train them and make them fight inside the Paleoarena in special daily tournaments. In the background of these battles we find the very simple plot of the title: an evil criminal, he wants to get the most powerful Vivosaurus in the globe to subjugate him, but on his way he will find the Keepers led by the captain Stryker (the organization in which the avat is also active 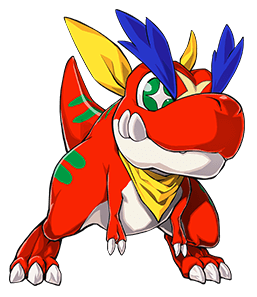 ar of the player). In addition to the Vivosaurs that you will find in the dedicated areas, you will be joined by a special dinosaur, able to transform itself over time: while expressing himself only in verse, this little fire red guy turns out to be the most characterized character of the title.
The first big flaw of Fossil Fighters lies precisely in the characters dull, insipid and with only a hint of characterization: does not even hold the excuse of the title dedicated to children, so that for example in Inazuma Eleven (practically the same target) the supporting actors are all well defined (as far as specks or stereotypes); there are obviously a couple of exceptions but to bring out these personalities, you will have to go well beyond the first half of the game.

As in the series to which it is freely inspired, the plot of Fossil Fighters only serves as a glue to the battles between Vivosaurs, but unlike the titles Game Freak, lacks that bite or fails to appeal to a player over eight, who has seen too many stories of this kind. Furthermore, to "take off", as long as it is possible to define it as a take-off, it will be necessary to explore all the parks (one per continent) for about ten hours, saving poor scholars or challenging Chinese girls who remember much more famous fighters, between trivial and easily predictable by a mature player.

the exploration of the parks is the most successful part

The protagonist will move in the theme parks with a Fossilstrada, a car whose driving mechanics are primitively modeled on those of Mario Kart 7, with acceleration on A, the brake and reverse on B and the drift on R; the exploration of the parks is the most successful part of the Red Entertainment title, with roads, obstacles and jumping platforms scattered around the playing area and where the player is pushed to return to the archaeological sites already visited as soon as their fossil road is upgraded , to reach places hitherto out of reach. L is entrusted with the Paleoradar, a true ally of every Keeper, which allows you to find fossils or treasures hidden in the stone, once the fossilstrada has been identified, it will stop and start the extraction. Initially you will have only a hammer and a drill to bring to light the many fossils present in the title: in a certain period of time (which varies from the size of the battery of the fossilstrada, up to the attack by wild vivosaurs that will interrupt the extraction) it will be necessary to make the dinosaur part emerge from the rock, filling a bar as you clean the fossil. If you exceed 50% of the surface, then the mission will be accomplished, and once the time runs out (or the bar is filled) the Vivosaurus will be awakened or in case it is a new piece (for a total of four base, plus four extra more rare) will be upgraded as you rank up and learn a new move. If at the beginning extracting fossils and jewels is fun, the weight and lack of deepening of this mechanic becomes evident over time: once the archaeological sites have increased, with a large group of vivosaurs following a high level (called Grado), it will no longer make sense to get new ones, because any awakened dinosaur will be provided at Grade 1, limiting our choice between five dinosaurs (one of each, but more on that in a moment) unless you are a fan of farming.

Struggles and ran to the fossil

Once the history section relating to a particular park is completed, Fossil Races will be unlocked: more difficult sections in which you can obtain a rare fossil, after defeating a particularly ferocious Vivosaurus. These sections are the most difficult of the title, because if the Vivosaurus is easily beaten using the right element or strategy, in the absence of advanced tools (in addition to the basic ones that can be upgraded via game currency, you can get stakes and an extension additional time) and online companions to dig with, facing the extraction before the last stages of the game will not bear any fruit, resulting mainly in a waste of time. On the other hand, the fights are quite different, up to a maximum of three against three, where in addition to the player's Vivosaurus, we will be joined by a maximum of two paleofriends (NPCs or friends in possession of the game both locally and online) in turn-based battles that are almost entirely reminiscent of Pokémon. Each Vivosaurus belongs to one of the five elements (Air> Earth> Water> Fire and Neutral) and has available up to a maximum of four moves (obtainable by extracting the relative fossil) that require a certain amount of energy to be used. At the beginning of each round, the speed of the vivosaurs on the field will be evaluated, and consequently the order of attack: each dinosaur has a specific ability that grants it

a mixture of gameplay but none with their own identity

bonus and malus, and stats that can be improved by increasing in rank, while every move in addition to damaging the weak element, also takes into account the position of prehistoric monsters thus ensuring an additional advantage or disadvantage.
They close the aid capsules, which can be used during the attack and defense animations, which guarantee stat increases and are of limited use for each fight.
In addition to the battles provided by the plot (all too easy), and those against the wild in the parks, you can try your hand at Paleoarene, where every day of the week there will be a tournament (Fossilthlon) with certain rules (for example on Thursday there will be dinosaurs expert in the use of status changes and special moves), and once you win you will have access to the higher difficulty; in the Paleoarena you can also challenge a friend who owns the game both locally and online, a feature that unfortunately we have not been able to try.
Fossil Fighters mixes different gameplay but fails to make even one stand out, resulting in an indefinite mixture and not deriving its own identity.

Not even under the technical side Fossil Fighters manages to shine: the dinosaur models are devoid of charisma and easily forgotten except for rare exceptions (including the protagonist Vivosaurus and its transformations) and the same can be said of the 3D modeling of human characters, the The only positive note are the 2D sprites of the characters, much more successful from a visual point of view than their polygonal counterparts.

But the real negative point under the technical side is when you find a fossil or you have to start a fight: the game freezes for a few seconds and then offers a black screen and loads the next phase, further slowing down the already very slow rhythms of the game. title.
Not even the soundtrack stands out for its originality, were it not for the catchy main theme that accompanies every lighting of the title; the texts on the screen are fully translated into other languages ​​and suitable for an audience of all ages.

Verdict 6/10 It was better to leave them dead and buried Comment Although not without good ideas, Fossil Fighters: Frontier does not fully develop even one, not convincing the player who is preparing to awaken the dinosaurs. The title seems to be a mixture of different mechanics but which never manages to shine with its own light, but only that reflected by other much more successful titles. It is mainly suitable for very young children, especially if they love the Jurassic world or if they are unaware of the presence of other titles of the same genre on Nintendo consoles. Pros and cons ✓ Pleasant musical main theme
✓ Some good ideas x It lacks identity
x Insipid and easily forgotten characters
x Revisable fossil system
Do you want to be a video game expert and know all the tricks, guides and reviews for your video games ? Holygamerz.com is a group of video game fanatics who want to inform you about the best tricks, guides and tips. We offer you the best information to be a reference in gaming, so here you can find guides, tricks, secrets and tips so you can enjoy your games to the fullest. Are you ready to get all the achievements of that game that you resist so much? Enter now and enjoy your favorite video game to the fullest!
Tales from the Borderlands: Episode 5 - The Vault of the Traveler review ❯