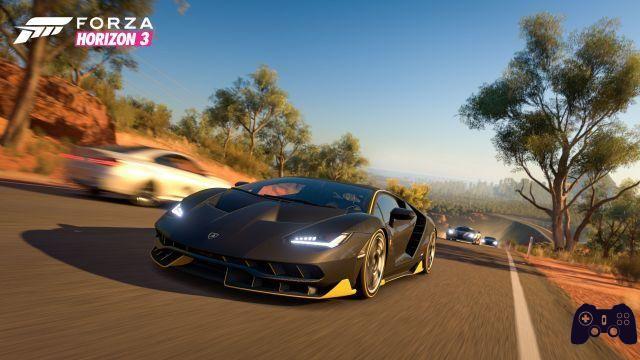 On the occasion of Gamescom 2016 we were able to take a first look at the now imminent Forza Horizon 3, witnessing a closed-door presentation of the title (with live gameplay) in the company of Ralph Fulton, Creative Director of Playground Games. Damn profitable chat, given the amount of news that emerged for the title to be released on September 27th.

Great attention to the social component of the title

During Fulton's speech we found ourselves thinking, more than a few times, of how in fact a title of the "competition" like Driveclub has done some school. The third iteration of Forza Horizon seems to have taken some inspiration from the Evolution Games title: during a race the pilot, for example, ran into a "drift zone", where a sort of challenge was active in the challenge that allowed to accumulate extra points based on the drift performed with the medium; solutions that we already had the opportunity to try a couple of years ago on the PS4 exclusive title and that surely we are pleased to find even in a very rich ecosystem like that of Forza Horizon 3. But also the concept of "Club", in a certain sense , finds its place in the arcade racing spin-off from Microsoft, since On the one hand, it is possible to recruit the Drivatars of your friends to make them compete and collect the proceeds of their performances, while on the other hand the companions will be able to do the same thing with the player's virtual alter ego (assuming him in turn), allowing access to a series of rewards based on the results obtained on the road by the Drivatar. A mechanic that had as its starting point the insertion of in-game notifications contextual to what happens from this point of view, with the game able to promptly warn us about the deeds (and the contractual situation) of the Drivatar. But even net of these aspects Forza Horizon 3 tries to rediscover the charm of teamwork, given the possibility to play the campaign mode in co-op with up to four players, with not only friends in possession of Xbox One but also (given the clearance of cross-play at Microsoft) playing with those who instead opted for the Windows 10 version of the title.

The key word is freedom, as evidenced by the Blueprint Mode

The other key word behind the experience is freedom. Not just because the Australian location allowed the developers to indulge themselves with regard to the tracks (Oceania is one of the richest and most diversified territories from the point of view of biotypes), but because the experience can be truly tailor-made for each player, putting him at the head of the festival and allowing him to try his hand only in events that are in the its strings. All this finds its maximum expression in the new Blueprint mode, which allows you to create customized events by defining their characteristics in detail.: type of track, usable vehicles (using a powerful search tool that groups the vehicles under different criteria, from the manufacturer to the type of vehicle, or by deciding one by one the cars that can be chosen), weather conditions and even the name of the event, which will then be faithfully reproduced on the screen when you get on the track.

And if all this were not enough it comes to add further variability to the experience Forzathon, a series of weekly events (which, month by month, the development team will announce on social networks, also specifying the rewards) that will allow the winners not only to compete against the entire community of fans of the title, but also to get their hands on rare vehicles and access various types of benefits.


Details in the clouds

From a visual point of view, nothing to complain

From a technical point of view Forza Horizon 3 really has nothing to envy to other titles of its kind: the game world is very faithfully reproduced, with a visual detail that puts a lot of attention to detail, and also the lighting system has been enhanced in order to respond credibly and punctually to what happens on the screen. The lights will then obviously also be conditioned by the atmospheric conditions of the sky above the pilots' heads, which never like this year gives back the feeling of looking at glimpses taken from real life (not surprisingly, the development team has collected various photographic material on this theme and has spent a lot of time in the creation of sky and clouds, and it is impossible not to believe the words of Ralph Fulton given the results obtained). It is no coincidence that the development team has decided to include a Drone Mode in the title as well, which allows you to explore the map in absolute freedom by making, among other things, shots with a high visual impact.

Comment Ralph Fulton at one point told us about Forza Horizon 3 as the definitive racing game for the series, and it is difficult to blame him given the amount of innovations introduced: from the aspects related to the social and community component to the introduction of modes where the imperative is "do what you want" like Blueprint Mode, everything seems to fully support this evaluation, especially since everything is then placed in a frame that from a visual point of view seemed to us in shape as never before ( and, by the way, we are sure that you will find how the Drone mode will absolutely teach and will be "plagiarized" by other titles as well). All that remains is to wait for the release to see if everything will work as well as on paper, but the doubts at this point can only be a few Pros and Cons ✓ Technically impressive
✓ Lots of news on the plate
✓ The drone mode will teach x Forzathon to be evaluated in the months following the release

Do you want to be a video game expert and know all the tricks, guides and reviews for your video games ? Holygamerz.com is a group of video game fanatics who want to inform you about the best tricks, guides and tips. We offer you the best information to be a reference in gaming, so here you can find guides, tricks, secrets and tips so you can enjoy your games to the fullest. Are you ready to get all the achievements of that game that you resist so much? Enter now and enjoy your favorite video game to the fullest!
Special What would real life be like if we were in The Sims? ❯