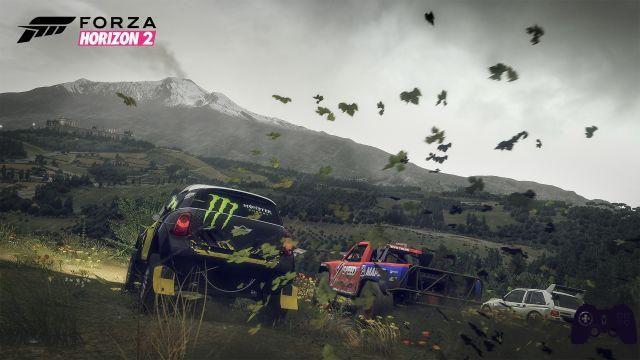 Forza Horizon 2, the arcade spin-off of the series created by Turn10 and developed by Playground Games, was one of the exclusives Microsoft products most popular of this 2014. A little less than 2 months after its debut, the first, full-bodied, DLC arrives on our consoles. We are talking about Storm Island.

Take the umbrella that rains

After having experienced the joys of the Horizon festival it is time to make a little detour on theStorm Island, location of this new stage that will take us to race in extreme conditions among the muddy roads of an island with a tropical climate. Even here to get to victory it will be necessary to win the various Grand Prix, each of which will unlock a special event that will put us at the helm of one of the new vehicles available in this DLC.
If in Forza Horizon 2 we found ourselves traveling the sunny roads of the French coast or the gentle slopes of the Tuscan hills during the beautiful summer season, interspersed from time to time by some showers, in Storm Island we will be at the mercy of sudden storms and extreme weather conditions, that will affect the outcome of the races.All this translates into poor visibility during our games, due to the walls of water or the banks of fog that will rise after the heavy rains, which will make it more difficult to orient yourself during the frantic off races -road in the fields or woods of Storm Island.

The entire DLC provides a twist towards a more rally driving model, always keeping the arcade approach of the original title intact. So drifting, dirt tracks that become rivers of mud after the first drops and many off-road races will be the leitmotif of this expansion.
While there are no substantial gameplay changes, however, it will be necessary to adapt to the new driving style, "more slippery" compared to the past, choosing braking times well and anticipating curves when necessary. The set-up of the various vehicles will also be revised, setting various parameters to adapt the machines to the rough terrain we are going to face, making them competitive. Those unfamiliar with the settings have nothing to fear as we will be guided and advised by the game on which parts to replace and which tires to mount to face the race.
Storm Island offers 90 new events, divided into 5 different categories: Rampage, Brawl, Cross Country Circuit, Extreme Cross Country and the new Gauntlet races, which will see us protagonists of night races in disastrous weather conditions and bad visibility. And there will be online events, rallies, unmissable challenges and all the collectibles already seen in the main game and here again present to enrich the player's experience.

Storm Island arrives on the Microsoft Xbox One shop at a cost of € 19,99, a relatively fair price based on the content package on offer and the overall quality of this DLC. All those who have purchased the Vip Pass (which allows you to get in-game benefits and exclusive content) will be able to buy it at a halved price, that is to say € 9,99. The DLC also adds 23 new Goals for a total of 500 Gamescore points.


Among the new cars available we find:

The fog on the hills

Storm Island despite being an offshoot of Forza Horizon 2 offers a new particle system for managing climate effects, with an excellent visual impact. The feeling of being at the mercy of the storm is excellent, as is the decidedly evocative final rendering. The variable water showers, the volumetric fog that will prevent you from seeing a stone's throw from your nose, the clouds of dust raised by the tires during dirt races, the crazy vegetation bent by strong gusts of wind. All elements inserted perfectly and of great effect that in hindsight I regret not having found already in Horizon because they are well made. There is some Horizon recycled element, especially as regards the vegetation and the numerous vineyards that we will decimate during off-road races, but in general the new setting, enriched by Greek-Roman ruins and active volcanoes (and which remind us very closely of our Sicily) , convinces, thanks to the design of its tracks designed to enhance the rally aspect of the game.

Verdict Yes It could be worse, it could rain! Commentary Storm Island is an interesting DLC ​​that enriches the Forza Horizon 2 experience by introducing a series of races seasoned with extreme conditions that make the challenge even more fascinating. New championships, new roads to tackle, new cars. Storm Island is certainly an essential purchase if you have loved and devoured Horizon but feel the need to run again. Pros and cons ✓ Well done atmospheric effects
✓ Lots of content and new vehicles
✓ An island to explore x High price for Vip holders
x Some elements recycled from Horizon 2

Do you want to be a video game expert and know all the tricks, guides and reviews for your video games ? Holygamerz.com is a group of video game fanatics who want to inform you about the best tricks, guides and tips. We offer you the best information to be a reference in gaming, so here you can find guides, tricks, secrets and tips so you can enjoy your games to the fullest. Are you ready to get all the achievements of that game that you resist so much? Enter now and enjoy your favorite video game to the fullest!
Detroit: Become Human Review - The Dan Brown Effect ❯