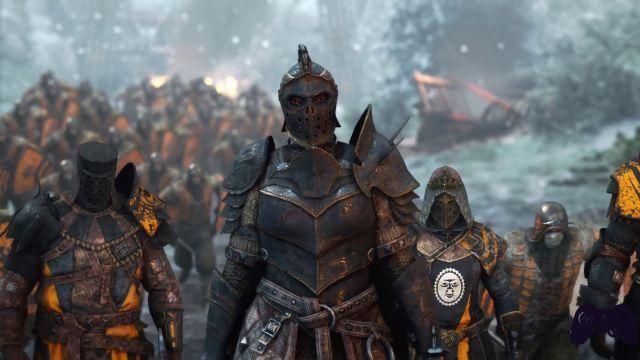 Ubisoft is one of the most prolific and controversial software houses in the current videogame landscape, which, for better or for worse with its games, has marked generations of consoles for years, creating iconic, loved and talked about titles. In the new philosophy of the French house there is in recent times a tendency to push more emphasis towards online multiplayer experiences. We have seen this new course ushered in by The Crew e The Division, to then expand to other genres, such as the most recent steep or soon with a revamped Ghost Recon.
But among all the titles coming out in recent months the attention has been catalyzed by For Honor, online action with a decidedly particular gameplay and a medieval setting that, like in the best swashbuckling movie, promises not only lots of action but great showmanship and hours and hours of healthy online fun. After spending ten days among the heroes of For Honor, the time has come to draw some conclusions on the latest Ubisoft effort.

The honor and the respect

Since its presentation in the "distant" E3 2015, Ubisoft has literally "hammered" the user with a wealth of information on For Honor. Particular attention compared to other titles of the same French team, materialized in recent months with a beta, revived even a few days before the official launch. An almost necessary perseverance, with a supreme purpose: illustrate and make the public understand the combat system (and in turn the control schemes) on which For Honor was built. A system with simple foundations, which it actually hides a complex balance of actions all based on timing and strategy. The fights of For Honor are the fulcrum of the game, the basis of any activity that we are going to face and it is precisely from here that, once started, we will leave for this journey starting with a series of more or less in-depth tutorials that will illustrate us, step by step step by step, how to survive a fight with an enemy. For Honor distances itself from any gameplay seen in recent years, proposing a solution that, for a triple A title it is something so original and "risky" as it hasn't happened for some time.

The control of the character will take place in a canonical way, through the left analog that will allow us to move him freely in the game area. The "magic" will strike when, once we have intercepted an enemy, we start the fight hooking it with the target lock: here, weapon in hand, we can start attacking using one of the two types of shots available, fast or heavy, which will determine the speed of our actions. The need to make this combat system understood arises with the "complicated" mechanism linked to parades, essential for blocking enemy shots and, at the same time, preparing the counterattack phase. Through the right analogue, following an indicator on the screen that will show us the posture of our character, we will be able to direct the weapon in the direction of the opponent's attack, so as to reject it. A simple and immediate dynamic on paper, a kind of "triangle system" seen in many other games, here made minimal and intuitive to excess. But this shameless simplicity hides mechanisms that go far beyond mere theory, and here to balance the clashes there are counterattacks, breakdowns of the guard (and respective counter-move) and parries, everything can always be done with the right timing, transforming the battles into a sort of "dance" that rewards both steadfast nerves and head shots. 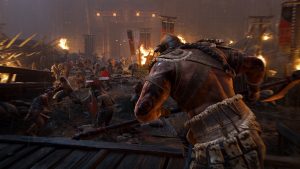 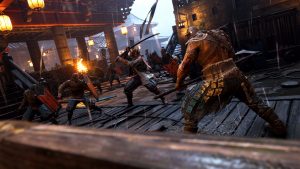 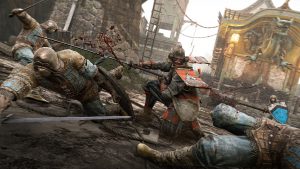 The observation of the opponent becomes essential, every move must be studied with attention and reflection, and the strategy to be used must vary rapidly following what is happening around us, without distractions and without never take for granted our supremacy over who we have in front of us. We must then take into account the stamina bar, which will mark our every single action, and once consumed will make us slow and vulnerable, as well as easy prey for opponents. Numerous factors then come into the battle, which we can use to our advantage to quickly eliminate our enemy, taking advantage of the unevenness, the traps scattered here and there in the playing area, such as geysers or pointed poles, or pushing them off a cliff breaking their guard.

Contrary to what might be leaked by watching a For Honor gameplay video, knowing your character will be essential, because each of the 12 warriors present will vary in the style of fight, in the timing and in the quality of the achievable combos, offering the player substantially different experiences based on the one chosen. Just to reiterate Ubisoft's desire to put the player at ease, we will not only have a series of advanced tutorials for individual fighters, but also practical video guides that illustrate the various styles in detail, thus allowing us to find and choose what the more it suits our tastes.

While it is primarily a title focused on online multiplayer, For Honor offers all the tools to make the player feel at ease before throwing himself headlong into this new adventure, starting with a Single Player mode.
In this campaign, can also be tackled in a cooperative with a friend, we will play the role of some legendary heroes who, after having faced the advent of a cataclysm that has rewritten the rules of the world, making the coexistence between Knights, Vikings e Samurai, will be tested with the arrival of Apollyon, leader of the Legion of Obsidania, whose purpose is to to subject all peoples under his command, and to do so it is ready to wreak havoc and destruction with endless warfare. It will be up to our heroes to rebel against the Obsidian Legion, looking for a way to finally arrive at a peace that leads to a peaceful yet forced coexistence.

In the 6 hours of the main bell we will be thrown on the battlefield and we will face different situations, some of which will then return in the various multiplayer modes. From a playful point of view, one realizes how much while engaging, the single player campaign fails to emerge and establish itself as the main mode, earning a soon forgotten secondary role.
We have a system of growth through levels that takes advantage of the experience gained, skills to unlock and use in battle and collectibles to be recovered to obtain rewards for customizing the warrior that help replayability (in case you decide to "take" everything), but on the whole everything appears quite anonymous. The plot itself, interesting as it may be, he suffers from the short time available to him, failing to develop as hoped, as the really interesting moments can be counted on the fingers of one hand.

The story of For Honor not only serves to outline the foundations of the world told in the game, but also to introduce the protagonists that we are going to use online

The advancement of the single player reminded us in some respects Ryse: Son of Rome, one of the launch titles of Xbox One, you want for the story setting or the feeling of pitched battle that reigns in the various missions. Compared to the title Cryteck however, it lacks that scenographic aspect capable of hitting the player and entertaining him, so as to pleasantly drag him during the hours of play. THE fights will be quite repetitive, especially against the basic "mobs", who, like a musou, will become slaughterhouse fodder under our blows, relegating the most demanding moments of the mission to the "bosses", even if, to have a greater challenge we will be forced to raise the difficulty level, thus making AI more competitive and less predictable. As much as it is necessary to praise the gameplay and the combat system, we realize how this is more well integrated in the multiplayer counterpart than in the single player one, giving the impression that the latter was born later out of necessity and not vice versa. 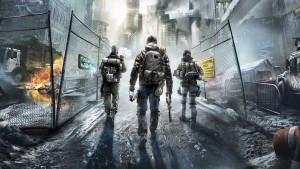 To learn more:
Tom Clancy's The Division 1 2 3
Do you want to be a video game expert and know all the tricks, guides and reviews for your video games ? Holygamerz.com is a group of video game fanatics who want to inform you about the best tricks, guides and tips. We offer you the best information to be a reference in gaming, so here you can find guides, tricks, secrets and tips so you can enjoy your games to the fullest. Are you ready to get all the achievements of that game that you resist so much? Enter now and enjoy your favorite video game to the fullest!
Guides Guide to the B&D minigame and how to win - Bravely Default II ❯

ILoveRetro The whole story of Streets of Rage

Jump Force review: be careful what you want ...