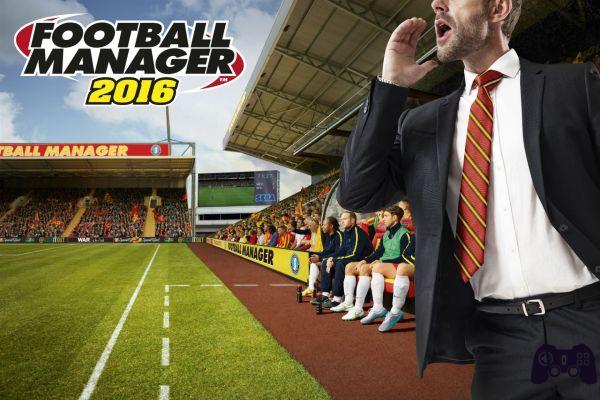 One of the winter sports events for football fans is certainly the arrival of a new Football Manager, a managerial title that has made history among fans since it was called the Scudetto. We have spent many hours on both the beta and the full game and are ready to give you our thoughts on Football Manager 2016!

Sport Interactive during the presentation of the title a few months ago announced two new modes that will support the classic Career (which we will talk about later): the Draft and Create a Club. The first is the in-game transposition of "our" fantasy football and is playable exclusively online with friends on Steam, in which everyone will have a few million available (you can choose the amount of money while creating the game) in order to create the own team in a turn-based system that is very reminiscent of the NBA draft where a player will be able to call a footballer by spending his own money thus trying to build the best possible team. Unfortunately this mode will be playable exclusively online so if you want to organize your fantasy football in Football Manager sauce, you will need an internet connection and as many copies of the game as people want to participate; this mode will surely see more innovations in the coming years thanks to the suggestions of the users that will surely help the developers.
A different fate, however, for the Create a Club that will allow us to give life to our team almost from scratch while maintaining the technical staff, the reputation and budget with which we can buy players from other clubs, while those we will cut to make room for great champions will go will be released. There are also, like last year, the mode Challenge is that touch. The latter is similar to the main Career but has been simplified both in graphics and in content since it will be possible to continue your game on mobile devices iOS e Android. In addition, this mode will be released in the coming weeks separately at a reduced cost (about 20 euros)

The dynasty of the victors

Moving on to the traditional career mode we finally have the possibility to create our personal avatar at the beginning of the game with the possibility, like last year, to insert scores in some characteristics that will give the background to our coach. Of course the options are not those of a RPG or a simulator like The Sims, but this allows you to identify a little more in the management of the team than ever before you can appreciate. Sport Interactive has decided to graphically change the view of the team in the formation by modifying the jerseys of last year with squares that show some characteristics of the player such as the state of form, the role (and the evaluation of the player in that position) and the vote if is displayed during a game. In addition, the team instructions window has also been changed which will help less experienced players thanks to greater intuitiveness and graphical elements that will indicate what we are changing of our scheme. It will also be possible to create complex patterns on both offensive and defensive set pieces, while the coaches in Football Manager 2016 will be able to better study their team and the opponents thanks to the collaboration with Prozone Sports, one of the best companies in sports analysis. After the great revolution in the tactical field we come to the pain points of the career mode: the interviews with the media. In recent months, the developers have promised big news in this area but everything seems to have remained exactly the same, with the exception of some details such as the possibility of seeing directly on the screen how long one of our players is injured if they are asking a question about him. Unfortunately Sport Interactive has not managed to bring the long-awaited revolution also in this area and often it will go so far as to send the deputy directly to answer the questions of the media to avoid always the same phrases that in a championship year will repeat at least a hundred. of times. Another of the weaknesses of the old Football Manager chapters was the football market. During our test we were very satisfied with the changes we found in this area. The outgoing market has increased and it will therefore be easier than in the past to sell your players, even if some valuations remain too high (both incoming and outgoing), much better than some situations that occurred in the old games that led, for example for example, mid-table teams to refuse the purchase of good defenders like Mexés or Alex. Linked to this we can also point out how their players will now put more pressure than in the past, complaining and being unhappy with their use or for not transferring to an important club. If in reality the logic would lead to explain to their players that with a few games available it will always be necessary to have the best possible squad, in Footbal Manager we will be constantly targeted by criticism even from medium-level players who want to play as owners (even in direct matches which can be worth a championship). Surely this is one of the things that Sport Interactive will have to fix in the next patches.
As for injuries, the developers in recent weeks have announced a collaboration with doctors and physiotherapists to increase realism in dynamics and recovery times, and this can be clearly seen, but if you expected fewer injuries, you will stay very disappointed as players will continue to get injured too often. Furthermore, the club doctor will now visit the players several times during the course of their injury and will suggest whether or not to send a newly recovered player onto the pitch and try to risk him perhaps for an important match.

Everyone on the pitch!

As for the technical aspect, the games will be played by the CPU with the usual two graphics modes: the old 2D and 3D. Compared to last year, Sports Interactive has managed to improve the fluidity and animations of the 3D view, while as regards the artificial intelligence of the players we will often find ourselves wondering why some unconvincing choices (for example, mistaking simple steps or going in crisis during certain actions compromising the result), even if we have certainly noticed the step forward. Also noteworthy is the presence of a bar above the players' heads that will indicate their condition and that will lead them to ask for the change during the game in case of injuries and / or various problems. We also noticed an improvement in the dynamics on the pitch, and we will be able to enjoy the games with fewer posts and fewer cards.


As for the Sport Interactive menus, it has decided to simplify the interface even more and show the various categories on the side, while the possibility of customizing numerous aspects is back, such as changing the skins of the players, adding badges and shirts, to make it even more your game is realistic and immersive.

Verdict 8.5 / 10 And even today we are injured yesterday! Comment Certainly Football Manager 2016 is a big step forward compared to last year's title, at least for what concerns the sporting profile. Some promises have been made, not kept, on extra-sports content such as media interaction and injuries, but we expect that with the next release, all the less convincing aspects will be fixed. Those who have adored the previous chapters absolutely must not miss this new edition which, among novelties, additions and some smudging, promises to keep you glued to the screen for a long time. Pros and cons ✓ New interesting tactical options
✓ Great work on the graphics engine
✓ Interesting draft mode ... x ... although certainly to be reviewed
x Still too many injuries
x The players complain too much

Do you want to be a video game expert and know all the tricks, guides and reviews for your video games ? Holygamerz.com is a group of video game fanatics who want to inform you about the best tricks, guides and tips. We offer you the best information to be a reference in gaming, so here you can find guides, tricks, secrets and tips so you can enjoy your games to the fullest. Are you ready to get all the achievements of that game that you resist so much? Enter now and enjoy your favorite video game to the fullest!
Final Fantasy XIV: Stormblood review ❯