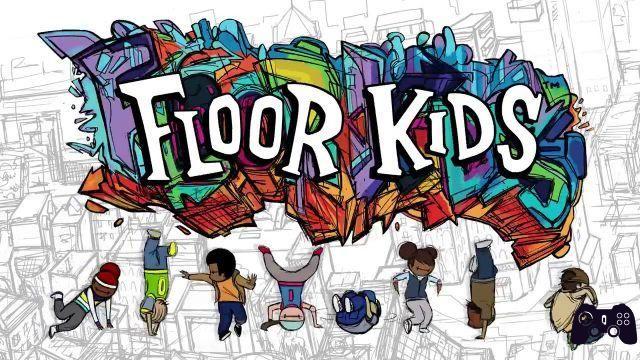 The MERJ Media artistic collective brings us all back to the 90s of break dance, with a unique rhythm game with an exceptional aesthetic, exclusively (to date) for Nintendo Switch.

I only got to know the Floor Kids project after taking over the review, tempted by the video that Guido made to convince me and immediately fascinated by its pure visual beauty, as well as by the rhythm soul that has always had a particular influence on me (not surprisingly I am responsible for the #Sounday column). In addition to the impact on the retinas, however, there is much more e his is the story of a true cultural project that involves four characters from different backgrounds, whose initials form the acronic Merja. Mike Wozniewski by Hololabs, software development veteran, Eric San, better known as Kid Koala, World-famous DJ and producer who boasts collaborations with Gorillaz and Deltron 3030, as well as tours with Radiohead, Beastie Boys and Mike Patton of Faith No More, an incredible curriculum for the one who has personally taken care of the musical side of the title. They close the circle Rhyna Thompson, a sort of manager-patron who works in the round in the artistic and cultural panorama, producer and creator of countless projects, as well as president of MERJ, while all the aesthetics of the title have been curated by the "J", or the artist JonJon, wizard of animation and father of the idea behind Floor Kids, born as an animated series and today landed on our Nintendo eShops. A real crew of b-boy and b-girl, an explosive collective, highly prepared and born out of pure passion, a forge of ideas that makes you want to peek into their offices, to find out what's cooking after the launch on 18 December. If the nature of the project intrigued you, wait until you see him dance. We go on stage.

Break dance has now archived its most pop period, however, resisting in the maze of underground culture and rising to a myth for the music scene, a street dance legend born in the 70s in the Bronx and spread like wildfire all over the world until the end of the 90s. Break dance means fluidity linked to the rhythm where the whole body is solicited by the DJ, between scratches and samples mixed at the speed of light, which the b-boy / girl on duty must give physical form through four types of moves declined in dozens of variables. The fluidity of Floor Kids is its most miraculous aspect, enhanced by the wonder of the animations drawn in pencil by JonJon, simulating in an amazing way the perpetual motion of professionals in the flesh, asking our freestyle to very precise commands and combinations. Total freedom that is limited only by our creativity and the sense of rhythm, Toprock, Footwork, Powermove and Freeze will soon become a real language to let one of our alter egos speak, chaining the 16 moves (different in the animations for each breaker) in the way that we consider most exciting and fun, letting ourselves be carried away by the music without distractions, dancing on the urgent and sought-after beats of Kid Koala. Very few objectives, the city divided into locations ranging from suburban neighborhoods to amusement arcades, passing through supermarkets and subway stations, each presented in a suggestive way, a tour in the street culture with an almost epic flavor, ravines of metropolitan life that will come to life on three different tracks each in which to get from one to five crowns based on the dynamic final evaluations, ranging from originality to a sense of rhythm (making moves following the bpm is the real challenge), passing through the flow and the ability to choose the right pace at the right time.

Animation and breakbeat come together in a very fluid freestyle musical where the player becomes a Joy-Con dancer. Irresistible.

Crown symbol of nobility that will allow us to obtain "character cards", useful to unlock other elements for our crew, each with four peculiar combos and attributes that vary the scores of the four dance styles. No changes on the theme for the duration of the campaign, pure scoring hunt to conquer each crown until you become one with the beat, interrupted by simple interludes from pure rhythm game where to hit the keys with the right rhythm ignoring the dance, to tell the truth the most obvious and forgettable phases, real annoyance at times, perhaps engaged in a particularly brilliant and smooth flow of moves to be forcibly abandoned suddenly, inexplicable and yet bearable interruption of the mood. Simple yet very deep, a fixed screen Tony Hawk's Pro Skater, a true Joy-Con dance (no, no motion sensors, exclusively old school), whimsical, very original, very limited in content like an arcade classic and hypnotic like it. An overwhelming personality that delights the eyes and satisfies the eardrums, a crystalline quality that becomes total gameplay, with variables to be discovered and a multiplayer for two players which blossoms into a dance competition at the latest Powermove.

(Thinking of break dance and all the sub-culture of the early 90s, Casino Royale always comes to mind)

Watching the game live, or rather, trying it by hand, is the only yardstick to understand the incredible work of animation that has been done. Really see our every key combination turn into an animation (of which almost every frame can also become a move in itself, transforming it into a "flyness" through the backbones), give life to a character characterized by a few strokes of pencil and a small description it is priceless, makes you want to dance, move. It makes the blood boil in the veins in time, leads us to experiment. Start a Powermove (spectacular and iconic rotary move on an axis of the body) by swirling the left analogue and then slow down (by slowing down the motion of the same stick) and stop in a freeze balance, wait until the limit of endurance, jump up and continue to dance standing up, completing everything with a backward somersault. The possibilities are many and seeing the naturalness with which each child will respond to our requests was the real love at first sight. Everyone will then find their favorite b-boy or b-girl, falling in love with his style, his way of understanding break dance, a feeling that inevitably passes through a painstaking purely playful work on controls, metematic, precise, versatile and providentially clear, avoiding the confusion of too complex combinations, giving everyone the opportunity to find their own dance style. The soundtrack is then a real album, as one would expect from an artist of this caliber, 24 tracks between funk, sampling, hip-hop and electronic reminiscences, extremely clean, perfectly integrated with the gameplay and the respective locations, without superfluous style exercises. Pure class on the console, where each scratch is a suspension of time capable of enhancing every focal point of the track.

Verdict 8.5 / 10 MERJ Social Club Comment Floor Kids is a title that plays on the console of the soul, scratching our synapses, and travels on an evaluation spectrum ranging from 6 to 10, according to the sensitivity of each player, making a real undertaking to quantify it. An experiment, a project, a small masterpiece that makes a mechanic its own, exalts it with a spectacular audiovisual protagonism and an immediate gameplay free from any constraint but leaves little or nothing at all. Honestly speaking, it is a priceless game, which would be worth the purchase if only for its uniqueness. € 16,99 of pure figurative, musical and videogame art, entrance ticket to discover, rediscover and experience one of the most iconic currents of recent decades. The MERJ collective promises wonders and with this first project has raised the bar of expectations to dizzying levels. Long live the artists, the b-boys and the 90s! Pros and cons ✓ Mind-boggling audiovisual style
✓ Flawless controls
✓ Pure freestyle x Annoying "rhythm" sections
x Few content
Do you want to be a video game expert and know all the tricks, guides and reviews for your video games ? Holygamerz.com is a group of video game fanatics who want to inform you about the best tricks, guides and tips. We offer you the best information to be a reference in gaming, so here you can find guides, tricks, secrets and tips so you can enjoy your games to the fullest. Are you ready to get all the achievements of that game that you resist so much? Enter now and enjoy your favorite video game to the fullest!
News + The continent of Excillant and its wonders - Bravely Default II ❯