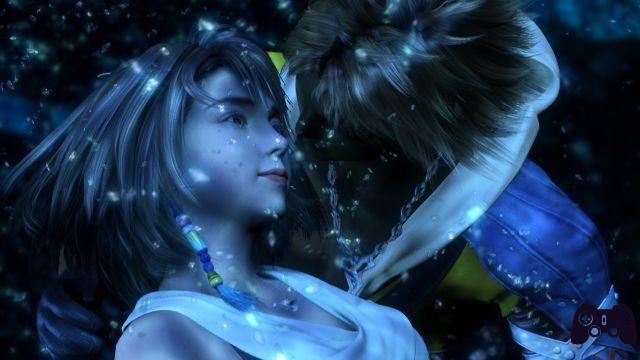 In the past few weeks, Square-Enix has released on Steam Final Fantasy X | X-2 HD Remaster, whose anniversary was recently celebrated. With an introductory price of € 19.99 (now € 24.99), this is the now fifth released version of the game and of which, again, we offer you our review.

The Final Fantasy X adventure will begin as Tidus, the protagonist and blitzball player residing in Zanarkand. Right during a game, Without, a huge mysterious creature, will attack the city, bringing Tidus up Spira, place where the entire story of the game will take place. You will meet numerous characters, each with their own character that often recalls well-known clichés (Wakka, for example, represents the typical religious fervent). In particular, he will meet Yuna, the invoker daughter of Braska who a few years earlier defeated Sin. The whole story seems to revolve around the relationship between Tidus and Yuna, plus the secrets and mysteries surrounding the protagonist's native land and Speyer. Final Fantasy X-2, on the other hand, picks up where Final Fantasy X left off. The protagonist is no longer Tidus, but Yuna, flanked by the already known Rikku and a new entry, Paine. No longer a summoner, our heroine has become a ball hunter and joined the band of Seagulls. If in Final Fantasy X important and profound themes are touched upon, even current in some ways, this does not happen in its direct sequel, which presents a plot e to the characters too superficial.

The fights in both chapters are turn based, albeit with some differences. Final Fantasy X uses a CTB system (Conditional Turn-Based Battle). There will no longer be the ATB, present instead in Final Fantasy X-2, but a bar that will mark the turn order of each character in the game, ally or enemy that is. The higher your speed attribute, the more actions you can perform, as well as more powerful attacks than others will require a certain period of "rest". Each of our heroes will be equipped with powerful and unique special attacks, known as Turbotechnics, usable if and only if the relative bar is full. In particular, this will fill differently depending on the type of turbo set, which will be obtained by fighting following certain fighting styles. As for the growth of the characters, however, we must refer to Spherography. It is a graph organized table in which the various nodes represent either skills or increases to the statistics that can be activated with appropriate spheres, while the levels will "consume" to move within it. In Final Fantasy X-2, however, the job system returns, created through the management of look, unlockable with the related lookfere. Each of them leads to different statistics, skills and fighting styles, while the development and growth of a character are again linked to level-ups and the acquisition of AP, useful for unlocking new features of a look. The look spheres are then placed in some Collections to be equipped which, in some cases, guarantee extra controls and advantages. Both game worlds are full of side missions, such as blitzball, racing with the Chocobo, hunting the monsters of Speyer, the Spherocenter and so on and so forth, with an extremely high overall longevity.

In this fifth version of the Final Fantasy X universe, more additions have been made compared to the previous two remasters. As expected, here too it is possible to activate some “cheats” in game which will make it easier for players intent on enjoying the game's story exclusively. It will be possible to obtain 99 units of each consumable and / or infinite Guil, you can directly unlock all the skills for everyone (however, the corresponding slot on the spherography will not be activated, Ed.). To these "permanent" options, other temporary ones are added, such as fast forward, increase / cancellation of random encounters or automatic combat (entrusted to the game's artificial intelligence). All these possibilities can also be used to avoid the very long and exhausting farming phases necessary to complete the spherography and maximize the statistics of each character. Contrary to what happens with the boosts implemented in the other chapters brought to Steam, therefore, we do not want only to facilitate the game, but also to speed it up to the point of circumventing the repetitiveness of some large sections of the game. Furthermore, it is not known if due to an "oversight" or if by choice, it is also possible to unofficially bring your own saves of the PlayStation 3 version (or even the others, through cross-save) on Steam, so that those who want to continue from where you left off you are not forced to start over. The last addition to note, but certainly not least, is the presence of the automatic saving, which is activated whenever there will be a screen change (it will even save between times in blitzball matches).


Finally a good one

Final Fantasy X | X-2 HD Remaster is probably the best PC port of a chapter of the saga to have been made. Almost certainly the reference model was its PlayStation 4 counterpart, a choice that allowed to further improve the visual rendering of the game. The environments and polygonal models are perfectly made, even if the greater detail, unfortunately, points out the inexpressiveness of the characters' faces in a somewhat excessive way. Despite the numerous complaints about it, the constant 30fps does not undermine the gaming experience in any way, except in some very limited cases. The menu is, on the contrary, made at 60fps, a feature that involves an evident drop in frames when it is closed, which results in a sudden slowdown in the movements for a few seconds immediately following.

The use of fast-forward, at double or quadruple speed, does not affect the request for resources, which remain perfectly unchanged. Furthermore, the framerate set at 30fps rather than 60 has allowed the system requirements, both minimum and recommended, to be kept extremely low, as is also evident from the list below, making the PC version suitable for practically anyone with sufficient space on the own hard drive.

As for the soundtrack, the developers have left the player free to select the original version rather than the rearranged one and vice versa. It will be possible to switch from one to the other even when the game has already started, thanks to a special item inserted in the game menu, also remembering that the graphics settings will be found in a separate menu.

Verdict 9/10 #FifthVersion Comment This fifth version for the universe of Final Fantasy X is an opportunity not to be missed for those who have approached the saga with these ports on PC by Square-Enix. For once, the technical implementation is superb, although many have, foolishly, to complain about the 30fps, as well as the additions are interesting and useful when used in the right way ("with great powers comes great responsibility" -cit). All of this comes at a price of € 25, a highly recommended purchase, as it is. Pros and cons ✓ Excellent technical performance
✓ Always fresh game mechanics
✓ Interesting and useful additions x Some frame drop
x Final Fantasy X-2
Do you want to be a video game expert and know all the tricks, guides and reviews for your video games ? Holygamerz.com is a group of video game fanatics who want to inform you about the best tricks, guides and tips. We offer you the best information to be a reference in gaming, so here you can find guides, tricks, secrets and tips so you can enjoy your games to the fullest. Are you ready to get all the achievements of that game that you resist so much? Enter now and enjoy your favorite video game to the fullest!
TrackMania Turbo Review ❯