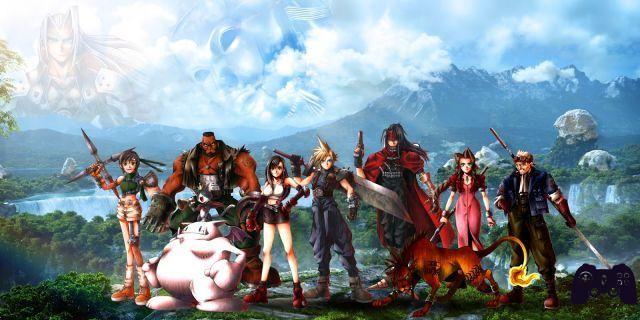 It was the January 31 1997 when it was released in Japan Final Fantasy VII, the most acclaimed chapter of the homonymous saga Square Enix (at the time still known as Squaresoft). In Europe it would arrive only 10 months later, but immediately it set itself as a yardstick for any jrpg, conquering gamers from all over the world and guaranteeing a place in the Olympus of the most loved videogames of all time. Now, after making it available for PC and with the announcement of the release of the remake of Final Fantasy VII in temporary exclusive on the main Sony console, could Square miss the opportunity to bring back the adventures of Cloud and his companions on PlayStation 4? The answer is obviously "no" and we are here to tell you if Final Fantasy VII on PlayStation 4 (has not undergone any addition to the original name) is a valid product or if it is a mere commercial operation, without any particular reason to be recovered. We remind you that this version, graphically cleaned, is already available in the PlayStation Store and is sold to 10.49 euros (until 13 December, then 14,99 €) with a theme attached characterized by a particular system music that we do not reveal to you so as not to spoil the pleasure of discovering it for yourself.

Avalanche is the new GreenPeace

La plot di Final Fantasy VII obviously does not deviate from the original title, putting us in the shoes of Cloud and an ecoterrorist group of rebels (called Avalanche) who are forced to fight against the multinational Shinra, intent on harnessing the Mako energy (the flow that flows and gives life to the entire planet) for its own purposes. This is just the beginning of an adventure that sees Cloud and his friends embark on a journey in an attempt to save the world from Sephirot's terrible company and even greater threat, an enemy from the past of our grim protagonist. The plot of Final Fantasy VII does not need any comment and is undoubtedly among the best of the entire saga. This happens not so much for a particular narrative complexity or for completely innovative elements, but for one extremely fluid narration which, mixed with balanced dialogues and extremely charismatic characters, accompanies the player from start to finish with a flawless pace and always leaving him satisfied with the game events. Events that, between the main story, the secondary missions and the exploration of the game world, will be able to give more than a hundred hours in the company of Cloud and his companions. A special applause must be given to the characters who, inevitably, will be able to conquer you and that you will not be long in loving in their many facets. Primarily Sephirot who undoubtedly turns out to be the best antagonist of the saga (together with Kefka from Final Fantasy VI) and that you will use in the years to come as a yardstick for any enemy you face. This new edition of Final Fantasy VII, as anticipated at the beginning of the paragraph, does not add anything regarding the narrative sector, but we feel however to criticize the choice not to add any type of subtitle in Spanish, making Cloud's adventures, rich in slang and / or invented words, difficult to understand for non-English speakers and, consequently, depriving a slice of users of the possibility of setting their hands on a milestone in the videogame landscape.

The gameplay of Final Fantasy VII, after almost 20 years, is still valid and fun

even the gameplay di Final Fantasy VII has not undergone any changes compared to the past and once again we will find ourselves at traveling through places belonging to the genre of post-industrial sci-fi dystopia, that is a reality in which we find a highly developed society thanks to fantastic elements, but characterized by areas of strong degradation. Beyond the classic factors related to the game genre (jrpg), such as the presence of NPCs, merchants from which to buy goods and chests to open scattered around the scenario, Final Fantasy VII is characterized by a combat system that oscillates between the old and the new (obviously for the time). The key to the battle system is theATB, or the Active Time Battle, a loading bar that will allow us to launch our attack only once filled, marking the battle and forcing the player to master the rhythms and skills of each individual character. The presence of Matters must obviously be added to the attack system, small spheres containing Mako Energy that allow you to be linked to the characters (and their weapons) to learn skills, spells, invocations and any other element of the game. The Matters are a fundamental point of the gameplay of Final Fantasy VII and, unlike the cumbersome Junction system of Final Fantasy VIII, it is immediately quick to understand, but at the same time complex to master. To all this must be added the presence of Limit Breaks, or some particular moves that, different for each character, will contribute substantially to the clashes, giving moments of great visual spectacle. They are also present during our adventure numerous minigames that, although some are slightly cumbersome and now dated, they manage to entertain giving significant additions to the game system, primarily thanks to the presence of Chocobo, the yellow (and not only) birds, symbol of the Square saga. In this new version, finally, they were introduced three cheats to make life easier for the less experienced. With the simple press of L3, in fact, we can triple the speed of play; with R3Instead, we will fill our vital bar and the limit break bar; self the two keys are pressed together finally comes "0 meetings" mode activated, allowing the player to roam freely without fear of being attacked. Although it is not mandatory to activate these cheats, we are sorry to know that activating these does not deprive players of the possibility of earning trophies, thus making the life of today's players too easy and certainly less exciting than in the past.

Pixels as big as biceps

Final Fantasy VII is a 20-year-old title and, technically, it shows

And as always, when it comes to HD porting, we've come to the point of evaluating the technical side of the work. As clean as the characters were, the polygonal modeling is extremely dated, thus thrilling only fans of the series that make visual style not a negative side, but a reason to dive back into the past and get your hands on a product of almost twenty years ago. For a new user, the graphics sector of Final Fantasy VII will inevitably be dated, thus affecting him less than a boy from 1997. also underline how some wallpapers have remained particularly low resolution, presenting sometimes blurred landscapes and poorly defined textures (inevitable when you put your hand to a product that is so dated). The sound sector is flawless which, now as in the past, offers one of the best soundtracks ever, with pieces capable of staying in the hearts of players for a long time.. We didn't notice any kind of bugs and / or slowdowns during our play session, showing once again how the games of yore didn't need day one patches in order to work properly.


Verdict 9/10 The end of Gaia will not come! Comment Final Fantasy VII is a mediocre port of a stratospheric title and, consequently, establishing a unique rating is not easy at all. What we can do is recommend with closed eyes the purchase of the two opposites, or for anyone who has not had the opportunity to play it and for those who are a die-hard fan of the seventh chapter of the Square saga. If you are in the middle know that you will find yourself in front of a title that is still extremely valid, charismatic and unforgettable today, but with an obviously dated graphics sector and not fully enhanced by a good, but not exciting, porting. The only real addition (the presence of the three cheats) is something really negligible and that, as for the Metal Gear Solid V chicken hat, will only be used by the most cowardly and less experienced. The final vote, therefore, is a middle ground between the vote for those who loved the game (which can easily add half a point to the whole) and for those who are still hesitant about this porting (which, instead, can bring down the total result. to an 8.5). Pros and cons ✓ Plot, atmosphere, unforgettable characters
✓ Current gameplay and still extremely fun
✓ Mind-boggling soundtrack x Graphically it is inevitably dated
x Porting not without defects
x Cheats make life too easy for players

Do you want to be a video game expert and know all the tricks, guides and reviews for your video games ? Holygamerz.com is a group of video game fanatics who want to inform you about the best tricks, guides and tips. We offer you the best information to be a reference in gaming, so here you can find guides, tricks, secrets and tips so you can enjoy your games to the fullest. Are you ready to get all the achievements of that game that you resist so much? Enter now and enjoy your favorite video game to the fullest!
Sonic Generations Review ❯