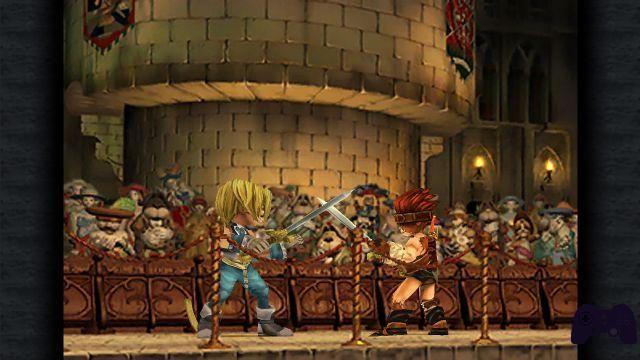 In recent weeks, Square-Enix has brought the last remaining Final Fantasy of the PlayStation 1 era to Steam that was still missing. It is about Final Fantasy IX, which in recent months has also arrived on PlayStore and AppStore, thus also arriving on mobile devices. Unlike Final Fantasy VII and Final Fantasy VIII which already enjoyed a PC version, for the ninth chapter it was necessary to carry out the conversion from scratch (or almost). The developers, in fact, once the iOS / Android version was created, they simply took it "by weight" by bringing it to Steam. But let's see in detail the results of this port.

The adventure begins as Zidane, the protagonist, aboard the Scenalante who, together with the members of the Tantarus, a group of bandits, will stage a theatrical performance on the occasion of the sixteenth birthday of the princess Garnet of Alexandria with the aim of kidnapping her. Already in this very first phase two other characters will meet who will accompany us throughout our journey, such as the brave Adalberto Steiner, captain of the Pluto team, and Vivi, a very young black magician. The kidnapping will not go as hoped, with the result that our heroes will find themselves traveling to the Continent of Fog. The name is obviously not accidental, as the lands of Alexandria and Lindblum, a neighboring kingdom, are perpetually pervaded by this strange fog that ends up making the beasts that populate it aggressive. During your journey you will get to know bizarre and mysterious characters, some allies and other enemies, trying to discover the reasons that led the queen of Alexandria, Brahne, to take such a warlike attitude. The stories of our protagonists will then continue between the various continents, a journey during which the player will learn about the secrets that lie in the past of Gidan, of the fog and of Kuja, the mysterious figure who advised Brahne in recent times. Final Fantasy IX enjoys the peculiarity of having a truly extraordinary and unique adaptation of the Spanish language. The various characters that will meet in the game will speak following either a local dialect or a local cliché on foreign languages. In fact, we will find ourselves in front of characters who will speak in Roman or Sicilian, others in Spanish or in "German". This choice translates into an extremely charismatic rendering of the characters who, without too many problems, will all conquer a slice of space in the player's heart.

Final Fantasy IX is structured according to the mechanics of a Japanese role-playing game. The clashes will take place with a sudden screen change, in which we will see four of our heroes in position and ready to face the enemies. The shifts will be regulated byATB (Active Time Battle) which, through a bar that will gradually fill up, will mark the alternation between the various characters / monsters. Each will be equipped with a number of general options, such as the classic Attack, Defense, Switch and Item commands, plus a signature action, such as “Steal” for Zidane or “White Magic” for Garnet. Each player character thus acquires his own personality and a fighting style that goes back, at least in theory, to the job system already seen in chapters such as Final Fantasy IV. This is also reflected in the equipment, as each will have a very specific weapon and can wear either light or heavy armor. At the end of a fight, you will receive experience points, useful for leveling up, AP, with which to learn the skills (active and passive), and Guil for shopping in the shops. The skills are linked to a specific piece of equipment and it will be necessary to obtain a certain number of APs to be able to use them freely even without the aforementioned object. Another key element in the battles in Final Fantasy IX is the "Trance”, A mode in which each character will be able to use new techniques (or old ones but with greater power) for a very limited amount of time. This temporary "power-up" is activated when a bar is filled which will charge extremely slowly whenever we suffer damage.


A world to be discovered

Final Fantasy IX is certainly a vast world full of things to do, including minigames and side quests. It will be possible to play Tetra Master, the “official” card game of this ninth chapter of the saga. Alongside him there are other activities such as pecking with the Chocobo, jumping rope, hunting frogs and / or racing with Hippo. You can then delight in the search for all friendly monsters of the game, creatures who will not attack us on sight but who will simply want precious stones in exchange for countless APs. There is also no shortage of optional and extremely powerful bosses, such as Ozma, Hades and Dantarian. Other secondary missions consist of the collection of the Stellazio or in opening enough treasures to convince Four Hands to reveal his real name to us. In Final Fantasy IX there is certainly a lot to do, ensuring the tools necessary for a noteworthy longevity. However, in this port on PC and mobile devices, the developers have met those users who simply want to enjoy the story of the game without caring about anything else. This was achieved with the addition of some "cheats" in game that offer an immense array of benefits, some reversible, some not. For example, it will be possible to disable random fights, set a sort of “god mode”, speed up the game (but not the internal clock or the timer sections), set every single shot to 9999; you can then have infinite money, characters at level 99 and / or immediate learning of skills. Final Fantasy also supports Steam achievements, controller support and cloud saves. 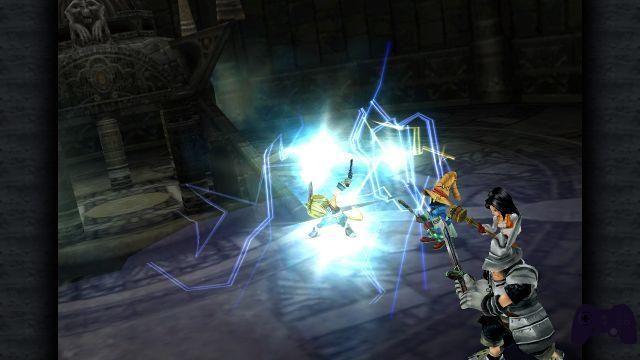 In the realization of this port, Square-Enix has recreated the polygonal models of main characters and weapons, while he remastered in high definition the films in computer graphics. From this point of view the result is nothing short of extraordinary and Final Fantasy IX appears more rejuvenated than ever. However, the same cannot be said of the textures, to which an antialising filter was simply applied. As long as you play at a lower resolution than the screen allows, the result is still acceptable, but playing in full HD is likely to lead to an unpleasant effect given by the presence of well-defined models on a background which, on the contrary, is not at all. The menus have also been remastered, looking much cleaner than in the original version of the game. Unfortunately, however, these are the same ones that have been used on Android and iOS, with the consequence that they are often unsuitable for combat, often ending up covering crucial parts of the screen (not allowing you to view important information such as damage done and / or suffered, for example). To worsen the situation is certainly the choice of the aspect ratio, fixed at 4: 3 rather than the current standard of 16: 9. That of Final Fantasy IX ends up being a porting from well-kept aspects, others less and others treated in an extremely superficial way, for a decidedly inadequate price of 20.99 €.

Contrary to what some reviews on the Steam game page reported, we didn't have any framerate issues which has remained constant all the time, although we played mostly on a MacBook Pro 13 (mid 2015) in Bootcamp with Windows 10. As for the soundtrack, however, no substantial changes were made, except for the higher quality of all those sounds that Final Fantasy IX fans will be well accustomed to.

Verdict 5/10 A when a right? Comment The port of Final Fantasy IX to PC is an opportunity for many to play for the first time (or replay in the case of old fans) one of the old glories of the past. In realizing this port, however, too many errors have been made, whether superficial or not, which drastically undermine the quality of the product, especially if you take into account the not really adequate price. It should also be noted that the vote refers exclusively to the port and not to the game itself which does not deserve such a low rating at all. If the defects found are not a serious problem, the purchase is certainly recommended (perhaps on offer), otherwise there are much more valid alternatives, such as the versions for PlayStation 3, PlayStation Portable and PlayStation Vita. Pros and cons ✓ Well-maintained plot
✓ Successful game mechanics
✓ There is so much to do
✓ Soundtrack
✓ Some aspects of the technical realization ... x ... but others are too out of tune
x The "cheats"
x Too invasive menus

No More Heroes review: the beauty of boredom ❯