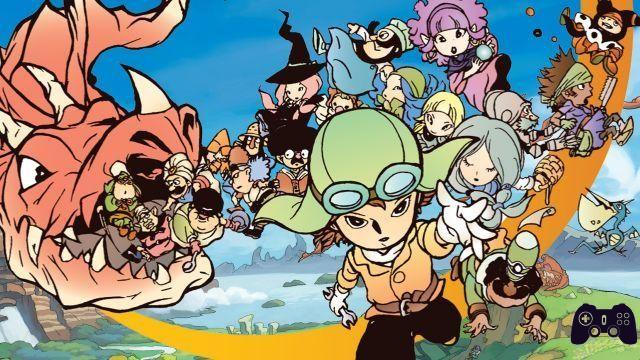 Sometimes all it takes is an ambiguously edited trailer and some lack of information to mislead the player into believing that the game they are waiting for is something other than what it really is.
This is perhaps the case with Fantasy Life, new project by Level-5 coming in Europe on September 26th on Nintendo 3DS after almost two years of waiting from the Japanese release. As it was presented it looked like Fantasy Life was a fantasy life simulator along the lines of Animal Crossing with the addition of some RPG elements. Once we played in hand we discovered a reality far from the first impressions gained on the Level-5 game.

A life at stake

Fantasy Life is in effect a classic JRPG with real-time combat. There will be a long story to follow and complete, numerous sub quests to solve and several side activities to close the circle. We will also be able to create our character from scratch, giving him the look that suits us best. Where Fantasy Life focuses, however, the accent is on the system of works, which characterizes a fairly basic play system in an original and thorough way. Contrary to the path taken by Square Enix with the Job System di Bravely Default, the twelve professions that can be undertaken during the game embrace the broader player without limiting himself to the combat system only. Taken individually, each job has its own characteristics that affect numerous aspects of character growth, infusing each class increase with unique skills and stat increases. Classes like the Paladin, Mercenary or Cacciatore allow you to take on the game with a combat-centric experience and simple attack power. Combination chains, loaded shots, and specials to use when the appropriate gauge is loaded are the basic elements of these classes. The Hunter differs from the other two in the use of bows, making it the perfect choice for those players who prefer to attack from long range. Also for those who like to play on the defensive we have the Mago, expert user of magical arts based on the 4 elements and which, if upgraded, allow devastating and wide-ranging attacks.

I'll be a firefighter when I grow up

On the other hand, the discourse concerning less canonical works such as the Tailor, Blacksmith or even the Cook that modify the overall vision of Fantasy Life making it essential to make the various works communicate with each other, going beyond the system of sealed compartments present in titles that rely on similar systems. Take the Blacksmith, for example, who can basically craft items, armor, and gear. The first hours dealing with this job turn out to be quite hilarious (also thanks to the individual storylines that accompany the various jobs) and will serve to learn the basics of the trade, then lightened by a 3-phase mini-game based on timing (similar then to the other works dedicated to the creation of objects) that will allow us to create the desired object. Having overcome the first challenges made available by the Grand Master Blacksmith, we will have to try our hand at creating advanced equipment that requires the use of multiple materials. And it is here that we can choose how to face the game, quickly liquidating the request by going to the nearest shop to collect the necessary or changing jobs to get everything with our own hands. Fantasy Life pushes the player to a continuous alternation of works to be able to face the game at its best. Will you need metal and wood to make a hammer? Nothing easier will be enough to become expert woodcutters to learn how to cut down trees, or tireless miners to extract minerals or precious gems, perhaps to resell and invest in the purchase of property. In these dynamics Fantasy Life approaches the series workshop, where crafting and item creation play a major role in the game's contour mechanics.


I want to go to live in the country… .and to kill dragons.

The Level-5 title does not offer too high a level if evaluated in terms of difficulty, but from the point of view of the challenge, being able to complete all the tests and missions that the game offers will prove to be decidedly challenging.
The managerial aspect, on the other hand, is found with regard to the embellishment of our home, of which we will be able to manage every inch of virtual space by inserting furnishing elements or choosing the theme of the walls and floors. We can even adopt a pet, which can live in our apartment or experience the adventure firsthand with us.
Our test has left us pleasantly surprised by the general quality of the game, not only for the content part that already in the early stages promises hours of fun but also for a technical sector that despite the two years on its shoulders does not feel the weight of time in the least. , thanks also to the excellent artistic direction that sees sacred monsters of the genre like Yoshitaka amano e Nobuo Uematsu who worked respectively on the characters design and the music of Fantasy Life.

Comment The first few hours with Fantasy Life were very pleasant. Not only did the game prove to be a profound and full of potential title, but it knew how to captivate us right away. Thanks to the cheerful and light style of the adventure but also thanks to a gameplay at first glance very simple but full of nuances thanks to the work system that fully reflects Level-5's experience in this field. While waiting to find out if Level-5 has hit the mark again, we throw ourselves headlong into the lands of Reveria in the name of adventure. Pros and cons ✓ Interesting system of jobs
✓ Packed with things to do
✓ Artistically valid x Simplistic for JRPG purists
x It may not be of interest to the more mature audience

Do you want to be a video game expert and know all the tricks, guides and reviews for your video games ? Holygamerz.com is a group of video game fanatics who want to inform you about the best tricks, guides and tips. We offer you the best information to be a reference in gaming, so here you can find guides, tricks, secrets and tips so you can enjoy your games to the fullest. Are you ready to get all the achievements of that game that you resist so much? Enter now and enjoy your favorite video game to the fullest!
Special Galeotto fu Epic Games Store: is it right to fight against Steam? ❯