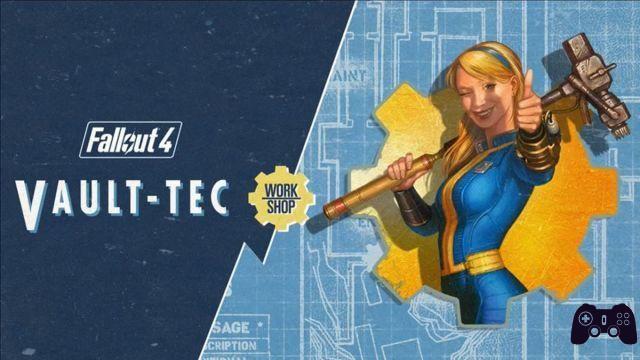 With the release of Vault-Tec Workshop, we have finally reached the third, and final, stuff pack available in the DLC of Fallout 4. For the occasion, Bethesda takes us underground, in a complex of caves that, originally, should have housed Vault 88.

It will be up to us to complete the work, populate the facility, and, like a good employee of the infamous Vault-Tec, carry out more or less nefarious experiments on our future inhabitants.
But first of all, let's see if it's really worth it. So welcome underground, where the future awaits us!

Repeating it now seems superfluous, but like the previous Workshop contents (Wasteland and Contraptions), even the one dedicated to vaults focuses on the construction of settlements. We will therefore have at our disposal new modular structures, materials and retro-themed furnishing accessories, of the kind that one might expect to find in one of the vaults scattered in the base game.

Obviously, as in the predecessors, most of them had already been available for months to users able to take advantage of the mods (to this day this excludes PS4 players), but what separates Vault-Tec Workshop from previous stuff-packs is not only the huge amount of facilities available, but the fact that incorporates new quests and characters, which is completely absent in Contraptions and Wasteland.

Starting from level 20, in fact, we will have the opportunity to respond to a request for help via radio, starting the main quest that will take us to the Quincy quarries. After a brief but bloody firefight with the raiders in the area, we will be able to access the rubble of Vault 88, and get to know the local Superintendent, Emily Barstow, the only non-feral ghoul in the area, who has been trapped in the interior of the structure. With the arrival of our alter-ego, and after having built her a desk worthy of a Superintendent, we will be able to kick off real DLC, building a vault worthy of the name and starting to experiment on the first inhabitants. 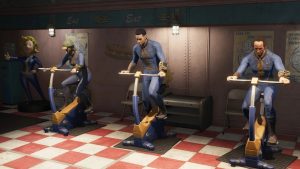 What the dlc loses in terms of originality of the contents, it completely regains it from the point of view of the spaces offered: while being able to easily exploit only the initial area, one of the possibilities offered by Vault-Tec Workshop Is that of explore the cave complex, each equipped with its own workbench and therefore manageable as a separate settlement, but with a solution of continuity between one area and another.

This, in fact, makes the Vault 88 area the largest offering in the game to create a settlement, but before you can start exploiting the secondary zones, you will need to activate the workbenches and clear them of enemies. The caves then become a real labyrinth populated by ferocious creatures (expect everything from mole rats to deathclaws through scorpions and robotic sentries), thus adding longevity to what otherwise would have been just another superfluous stuff pack.

Similarly, the short and repetitive fetch-quests in which we will launch ourselves on the hunt, from time to time, contribute to creating a much more complete gaming experience than the workshops seen so far, complete with rewards and interactions with various PNGs introduced. specifically in the DLC. 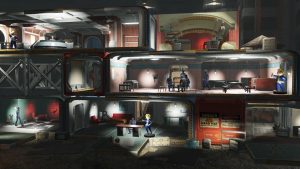 "... did anyone say Fallout Shelter?"

The Vault of Topo Gigio

Unfortunately, however, even in this case there is no lack of negative points: if it is true that we are dealing with a product that is decidedly superior to what we have seen so far in terms of stuff pack, Vault-Tec Workshop however, it remains a DLC aimed more at substance than quality. Surely the few experiments on residents offered by the main quest, whose only risk for the participants is dying of boredom, they will leave with a bad taste in the mouth who expected to recreate the real social tortures implemented in the normal vaults of the game universe.

It goes without saying that, being an underground area, the lighting becomes particularly important compared to other settlements, and the graphic glitches that limit the area illuminated by the buildable light sources. make Vault 88 a particularly dark place. Not that this cannot be solved with a small mod, of course, but once again these are options that are still not accessible to all users, and for the moment PS4 still remains out of the game in this respect.

The same is true of the compatibility with the AI ​​of non-player characters: while the various PNGs created for the occasion and the occasional residents lured into the vault by radio messages behave well or badly with normality, the behavioral script of merchants, caravans and any armed invaders goes mad completely when approaching an underground settlement. The former tend to ignore Vault 88, even after explicitly establishing trade routes, stopping outside where the constant respawn of marauders makes them easy victims. When the situation is reversed, however, the size of the caves not only makes it difficult to identify any "unwanted guests", but also forces them to wander without a precise destination, as if they were the real laboratory animals.

Finally, the problem remains that the new structures, as in the previous workshops, can often be combined only with each other, and sometimes patience and precision is also required for this. Accuracy that (by now after nine months we would also be tired of repeating it) is totally and absolutely lacking in the construction system offered by the game, and that, at this point, we will have to get used to suffering.


Verdict Yes My carpenter has finally found competition ... Comment Let's clarify one thing immediately, at a price of € 4.99, Vault-Tec Workshop is certainly the best stuff-pack available in the Fallout 4 season pass: between quests, content and new areas, certainly fully justifies the initial investment. But what left a bad taste in our mouth is that, basically, it is essentially a PC version and incorporated into the base game of "Fallout Shelter". The parallels with the app released in the months prior to Fallout 4 are almost absolute, including the ability to create a "split" vault by recreating the same visual interfaces as the Android / iOS title (residents also repeat the same phrases, recycled evenly) . Nothing particularly new under the sun, therefore, and being a DLC expressly linked to construction, it brings with it all that endless series of problems and unnecessary complexity of the system that we have complained about since last November, and to which Bethesda (by necessity or simple lack of interest) turned a deaf ear. However, without wishing to go into the merits of how much three stuff packs of increasing value can justify being released as separate entities rather than as a single, important DLC, it remains undeniable that (while not excellent) Vault-Tec Workshop offers just that much. enough to satisfy the user for a few hours. The material is there, much more than in the predecessors, just a pity it is used little. Pros and cons ✓ The largest building area seen so far
✓ Some short side quests
✓ Numerous new structures and objects ... x ... many of which are already available via mod
x Some bugs in lighting
x Little originality in the contents

Do you want to be a video game expert and know all the tricks, guides and reviews for your video games ? Holygamerz.com is a group of video game fanatics who want to inform you about the best tricks, guides and tips. We offer you the best information to be a reference in gaming, so here you can find guides, tricks, secrets and tips so you can enjoy your games to the fullest. Are you ready to get all the achievements of that game that you resist so much? Enter now and enjoy your favorite video game to the fullest!
88 Heroes 98 Heroes Edition review ❯