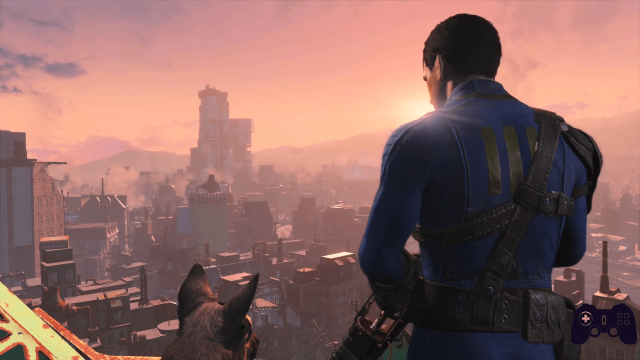 Seven years away from Fallout 3, five from the spin-off of New Vegas, loudly requested by fans around the world, Fallout 4 it showed up for the first time last June 3, then confirming a release date extremely close to Bethesda standards. The title will come up PlayStation 4, Xbox One e PC next November 10th. During the Gamescom 2015 we saw a new gameplay video behind closed doors thanks to the invitation from Bethesda herself.

The main novelty concerns the Perks: those bonus abilities of our avatar already seen in Fallout 3 and New Vegas that will allow him, for example, to increase his muscle mass (Resistant Back), or to be able to kill opponents in his sleep (Mr. Sandman) to fulfill certain requests. In Fallout 4 the Perks system has been simplified: there will be ten special abilities for each SPECIAL (the seven basic statistics of the avatar) and will be more monitorable than in the past thanks to a tree system, by unlocking one we will have access to the next by branching out the possible upgrades. Perks are now tied to stats only and no longer to level, providing the player with a skill point for each increase of the latter; levels that appear as a mere pretext given the absence of a level cap and the possibility of continuing to play indefinitely even after concluding the main plot unlike the two predecessors (in 3 in particular it was necessary to purchase the expansion "Broken Steel "In order to continue their progress).


Of equipment and creations

The substantial changes to the gameplay of Fallout 4, as seen so far, are not found in the user interface or in the actual shooting phases, but Bethesda has done an excellent job on customizing the weapons and for the first time of the buildings. Going in order, Fallout 4 offers on the Pip-Boy a 3D model of the chosen equipment, crucial for being able to customize it better given the large array of modifications applicable to both weapons and armor, a great evolution of what was seen in New Vegas that offered a customization via Mod; as in the past we will be able to pause game actions at any time by activating the device while it SPAV (the Vault-tec Assisted Aiming System) will be dedicated to slowing down time during combat phases (in tribute to the turn-based chapters).
The materials to be able to customize equipment and structures will be obtained from any loot in the world of Fallout 4: each item now has a purpose and can be used for something.

In addition, the big news of Fallout 4 is certainly the creation of your own settlements: you can use the materials collected to build buildings in the cleared areas and connect the various complexes to each other with commercial and transport routes. A further addition to the already huge wealth of experiences that the Bethesda title promises since the announcement.

It's all a question of feeling

One of the aspects that immediately catch the eye of a Fallout fan is certainly the change of direction of the game atmosphere compared to the third episode. If in Fallout 3 the main colors were shades of gray and green, symbol of a search for a return to the pre-apocalypse world, in Fallout 4 we find bright and gaudy colors due to the acceptance of the new world and the reality in which the protagonist and the supporting actors meet again from one day to the next. The new atmosphere is less gloomy but we are sure that it will guarantee different but at the same time evocative emotions.
Fallout 4 graphically differs from the previous one but in the video shown to us the polygonal models are still quite woody however, we are confident that between now and November 10 the title will be further improved also in this respect, repaying the wait and expectations of the fans.


Comment There are several differences between Fallout 4 and Fallout 3, although none of them as disruptive as the transition from the second to the third chapter. The expectations are many and give us hope thanks to the numerous additions such as the creation of the structures, the greater customization of the equipment and weapons allows for numerous hours attached to the joypad in the post-apocalyptic lands less gloomy than in the past. The appointment is for November 10th, arm yourself to the teeth and ready to create a new life. Pros and cons ✓ It's Fallout
✓ Creation of structures
✓ Easier perks to find x Still woody movements
x The less gloomy atmosphere, will it work?

Do you want to be a video game expert and know all the tricks, guides and reviews for your video games ? Holygamerz.com is a group of video game fanatics who want to inform you about the best tricks, guides and tips. We offer you the best information to be a reference in gaming, so here you can find guides, tricks, secrets and tips so you can enjoy your games to the fullest. Are you ready to get all the achievements of that game that you resist so much? Enter now and enjoy your favorite video game to the fullest!
Monster Hunter Stories Review ❯

Preview The Legend of Zelda: Breath of the Wild