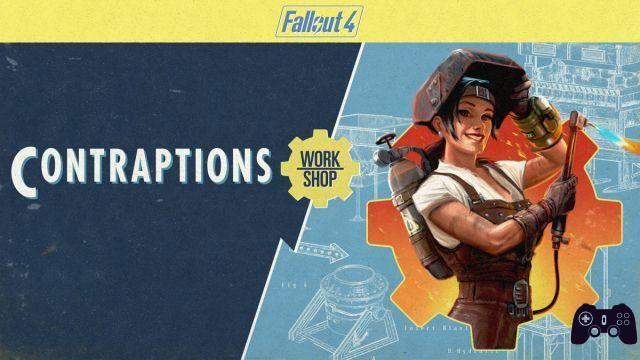 A press here, a few gears there, a couple of conveyor belts ... welcome to the world of automation, with the new stuff pack dedicated to Fallout 4, Contraptions Workshop.

As the name itself implies, Contraptions takes the same logical line as Wasteland Workshop, limiting itself to add furnishings, weapons and armor, but without actual quests or extra characters. Which, given the lack of attractiveness of the predecessor, doesn't exactly seem to be a plus. However, Contraptions has a small but important advantage on its side: instead of being limited to static structures, we will be able to literally create machinery of various kinds, from relatively functional production chains, to twisted nonsense mechanisms worthy of a Looney Tunes script.

Or at least, that's the offer on paper. The practical reality? Well…

The main juice of Contraptions are precisely the Rube-Goldberg machine-style automatisms. For those unfamiliar with the term, these are unlikely contraptions built with the explicit purpose of making simple operations spectacularly complex (but automatic). In a very similar way, Contraptions makes us available “target” switches, chutes, conveyor belts and so on useful to be able to give life to small engineering masterpieces, or, more likely, automatic torture tools based on baseballs and cannon fire.

In addition to the basic mechanisms almost entirely ends in themselves, however, we will also have much more useful equipment such as machinery for the production of ammunition and food, elevators, hoists and exhibition racks, which in a very similar way to what we saw in Skyrim, will allow us to display weapons and armor.

The downside, unfortunately, is twofold: the new facilities are very expensive in terms of resources, and given their nature which has very little to do with gameplay and difficulty, the quickest and least frustrating way to obtain them is theuse of cheats. Furthermore, since the machines use the physics engine (loaded locally in the presence of the player), we will not be able to replenish stocks when we are far from the settlement with automated production lines. However, we will be able to set our chain in motion during short stops for repairs and upgrades of weapons and armor, and recover the products before we leave. 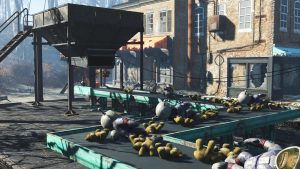 The upside, if nothing else, is that Bethesda seems to have noticed the interests of the community: usually mods that allow the display of one's own equipment. they are among the first to be created, as well as basic examples of "programming" with switches able to automate some processes. In the specific case of Fallout 4, then, there was a strong demand for being able to torture Preston Garvey, and the Contraptions pillory seems to be born on purpose. 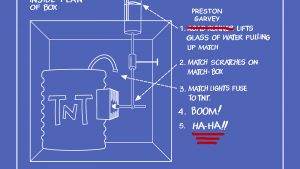 Unfortunately, it's not just the poor second-in-command of the Minutemen who suffer the consequences of the DLC. Compared to the additions in the field of structures introduced by its predecessors, Contraptions makes extensive use of elements that fit together, and that however, they require a strong dose of precision, almost to the millimeter, to function properly. Unfortunately, the settlement construction system, it offers absolutely no such control, and indeed, often and willingly seeking precision proves to be counterproductive as both the physics engine of the game and the AI ​​for calculating the paths of the characters they are not designed to handle situations to the millimeter.

The most immediate result, in the example of a production line with conveyor belts, is that instead of reaching the end of the chain, the objects on the rollers will tend to slip out and accumulate in the corners. Or again, the characters assigned to the structures will refuse to interact with them because they are too close to each other, sending the route calculation algorithm into crisis.
Unfortunately, barring sensational last-minute updates, this is a castrating system that we will also carry with us in the next Vault-Tec Workshop. 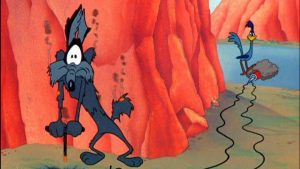 My carpenter continues to make it better

Speaking of a stuff pack, it is almost mandatory to talk aboutintegration with the modder community. In principle, if, as in our case, you have installed additional components that affect the available structures (or worse still, their cataloging), installing an official stuff pack is equivalent to saying: "light a candle and hope for the best".

Except for specific updates from modders (often available, but it is difficult to talk about it for sure), in fact, we can risk finding ourselves having to choose between official content and modified structures with which we have furnished the settlements so far, with the risk of seeing them disappear in a cloud of smoke. Given the large investment in the construction of the camps, unfortunately, this can be a heavy counter for a decent chunk of players.

As always, then, Bethesda's inability to keep an eye on every single existing mod has made it some redundant, or even obsolete, DLC components: of course, it is nice to have "official" racks for our weapons available, but the impossibility of exhibiting more than one weapon at a time, regardless of the size of the exhibition space, is a problem largely overcome by the community a few months ago . Same goes for the modular scaffolding, which with a little creativity was already available on the Nexus.

Verdict No No nuclear road runners to hunt down! Comment Ultimately, Contraptions is the classic DLC neither meat nor fish, nice to explore in its possibilities for some time (usually from half an hour to a couple of hours, depending on the effort and patience in designing structures) , but that quickly gets bored. In terms of gameplay, the additions are very few, if not the possibility of creating automatisms for the production of ammunition (very appreciated, especially after having burned a wagon in Far Harbor), and the differences with Wasteland Workshop and its problems can be counted on the fingers of one hand. Furthermore, the main problem also in this case is due to the basic mechanics with which the construction grid is managed, but this is a question that has been going on since November, and by now we fear that the only solution is to resign yourself to the impossibility. a complete renovation of the building system. If nothing else, however, it seems that Bethesda has realized that offering simple aesthetic additions (albeit at the paltry price of € 5) is almost an insult to the commitment of modders, and is the first timid step towards adding thickness. in Contraptions, both the much more succulent possibility of managing an entire vault coming in August, communicate a certain openness to suggestions from the company. Pros and cons ✓ Possibility of automation of structures
✓ Wide creative freedom x Expensive facilities
x Few actual additions compared to the mods
x Construction system unsuitable for the required accuracy
x Structural categorization conflicts with some mods
Do you want to be a video game expert and know all the tricks, guides and reviews for your video games ? Holygamerz.com is a group of video game fanatics who want to inform you about the best tricks, guides and tips. We offer you the best information to be a reference in gaming, so here you can find guides, tricks, secrets and tips so you can enjoy your games to the fullest. Are you ready to get all the achievements of that game that you resist so much? Enter now and enjoy your favorite video game to the fullest!
Cars 3 Preview: In Race for Victory ❯