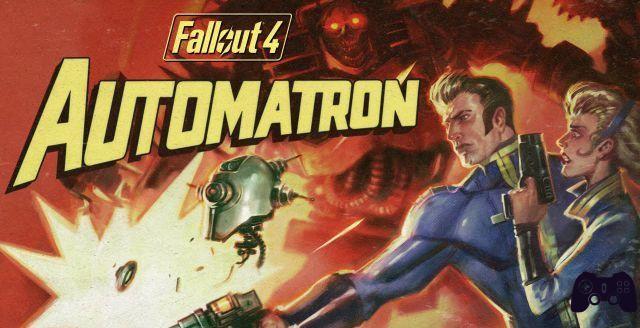 One of the most successful parts of Fallout 4 is the amount of mechanics dedicated to customization and the enhancement of practically anything: the locations, so the extensive (but still imperfect) settlement system provides the ability to recreate a semblance of civilization - or the most sinister of slums, depending on our desire to waste time; weapons and armor, which benefit from a noticeable improvement over the unnecessary complexity in upgrade mechanics seen in New Vegas, allowing even the seediest pipe gun to be made into a killing machine whose aesthetics are every DIY lover's dream -you; even the companions, to whom we can finally give equipment that makes them at least presentable in battle (let's face it: facing a horde of furious super mutants against humanity dressed in trench coats and berets was not exactly the best of intelligence, not even adding some cool sunglasses).

However, something was still missing from this delusion of possibilities, like a small worm that buzzes in the head from the moment when common sense begins to take over the atmosphere and immersion: in a Boston where technology seems to be decidedly at higher levels than the previous contaminated areas, in which there are still a plethora of entities whose sole purpose is to advance in the field of mechanics, and where the game system itself encourages experimentation with screwdrivers, hammers and computers… Why the ultimate in robotic interaction was equipping him with a bowler hat ?!

For all this, and for your needs in the field of killing machines - bar - faithful mechanical companions, Automatron is the DLC for you!

WE CAN REBUILD IT, WE HAVE THE TECHNOLOGY

The story in two words: The Mechanist. For those of you who have already played Fallout 3, the figure of the Machinist should sound an alarm bell: already present in the previous main chapter of the saga, in the form of a side quest, the masked vigilante / villain is a character born from the merger. between a pre-atomic cartoon character and the idea (on good paper) of helping the people of the wasteland. As in the previous case, however, even the new Machinist soon proved more of a problem than a valid support for the reconstruction of civilization, this time due to some artificial intelligences (the Brain Robots) who have taken their programming all too literally. We will then be called to fix things, starting from a radio help signal launched by a robot - Ada -, the new robotic companion whose appearance brings to mind a strange mix between Mary Shelley's monster and Asimovian science fiction, with a tendency to mention the Borg from Star Trek.


This premise is then followed by theintroduction to the fundamentals of robotic customization (on which we will return in detail later), with a series of "fetch-quests" not particularly inspired, which will take us around the Commonwealth in some short linear dungeons. Our search for pieces to be assembled in Ada, to build a tracer able to lead us to the source of the problems, will eventually lead us to get to know one of the most deliberately annoying AIs since GlaDOS: Fortunately, enduring Jezebel's frequent insults and whining will yield us a very tasty loot in terms of legendary gear and robotic components, as well as pave the way for the final chapter of an adventure that, like the plot of the base game, certainly does not shine for longevity. 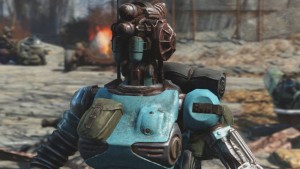 "We are the bots, resistance is useless!"

The true beating heart of Automatron, fortunately, it is something else: the rather banal plot and the colorful but shallow characters serve mainly to introduce the concept of robotic customization. At the base of it all is the new structure that can be built in the settlements, the robotic workbench. In addition to being one of the most massive constructions in the game - without considering the mods -, the station will allow us both to install components of various types on the artificial companions already present in the game (Codsworth, Curie and Ada, but not Nick), and to create new hybrids completely from scratch.


The level of customization allowed in the latter case is enormous: provided we own the pieces, we will have the possibility to choose the mode of locomotion, the type of weapons, torso, head, extra additions, aesthetic components, and even whether to include or minus certain essential components capable of make our Frankenbot more interactive with the surrounding environment but at the same time more cumbersome and specialized in certain types of territories.

We will then have the opportunity to tour the Commonwealth accompanied by a devastating three-meter-high, heavily armed tracked sentry (whose first and fundamental problem is maneuverability - damn stairs for the sacks of meat!), Or opt for a finer Mr. Handy model jet engine that will allow much greater mobility at the price of less resistance in combat. Or we could decide to have the best of both worlds and make a small, floating killer junk the size of a garbage can, equipped with heavy armor, double gatling and butcher hooks, potentially at the same time.

Obviously, as long as you have the intelligence to do it, and forcing players to do a heavy grinding of levels if not in possession. That charisma and dexterity build that has supported us so far doesn't seem like the best choice anymore huh? 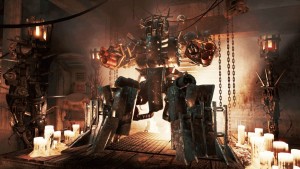 Beyond the pure destructive aspect, and skipped the plot sector, Automatron adds one thing that was missing from the beginning in the base title: the variety.

Mind you: many of the NPCs, albeit with a character thickness equal to an A4 sheet, hold up quite well as individuals in their own right, and often even the generic inhabitants of the settlements have something that distinguishes them. Quite different, however, is the discourse for the opponents: from generic pseudo-punk marauders to Mad Max, to mutants, passing through crazy synthetic and artificial ones, the game's entire plethora of random antagonists boils down to a handful of opponents calibrated in difficulty to the player's level and recycled continuously. Something that is fine for the first few hours of play, but which in a massive title like Fallout 4 soon expires into boring.


Automatron completely upsets the cards on the table, at least as regards the artificial opponents: while maintaining the same three / four generic names (which mainly indicate how high the risk of leaving one's feathers in a direct confrontation is), the robotic enemies of the DLC are the most varied the game has to offer. The most immediate comparison possible is with the first Toy Story: while the base game mainly offered "Andy's toys", the shelf ones, always the same even after the hundredth time, The Machinist's "big toys" are Syd's hybrids, built without any apparent logic by mixing pieces at random.

The result is a motley horde of creatures that they attack with the most disparate patterns possible, from the mechanical and calculated to the suicidal madman, in which, often and willingly, it is completely possible to lose sight of one's creatures, except for targeted aesthetic customization works. 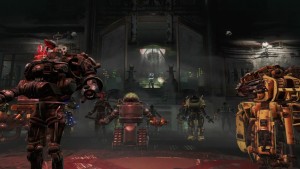 Verdict Yes These ARE the droids you were looking for Comment The idea behind Automatron is probably the dream - not too hidden - of any child of the 90s, raised on bread, legos and robots. Apart from bread, the first DLC of Fallout 4 responds perfectly to this need, giving us not only the satisfaction of creating a self-propelled colossus capable of threshing any form of life in the visible spectrum, but also a new purpose that definitely revitalizes an experience. which, five months after the original release of the base game, was becoming stagnant and repetitive. Unfortunately we are not talking about the plot, no, that remains the usual background pretext typical of every Fallout, made up of uninspired events, characters that are anything but memorable and a potentially tarallucci and wine conclusion. The heart of Automatron is the research and customization of the perfect machine: by defeating the Machinist we will not only inherit his costume, but also the desire to fill the Commonwealth with mechanical entities in Frankenstein's sauce, making up for the individual shortcomings of the canonical companions of the game. Bugs in the scripts aside, we are dealing with one of the add-ons that perhaps more than the others, in the recent history of the brand, revolutionize and expand the gaming experience, instead of providing a closed bubble that is born and dies a the events narrated have been exhausted. In addition to the substantial rewards in terms of equipment, Automatron adds a whole level of playability, which interacts perfectly with the base material, expanding its potential far beyond what is the narrative envelope. And that's even before the community gets their hands on it. Which, knowing certain modder tendencies to desecrate anything, opens up the possibility of disturbing scenarios, from the most predictable references to Terminator to ... well, let's say that robot components with a quarter of a breast could be the least worrying ... Pros and Cons ✓ New game mechanics
✓ Adds variety to NPCs
✓ Massive amount of equipment and components x Too linear
x Trivial story
x It forces you to grind to unlock a lot of content
Do you want to be a video game expert and know all the tricks, guides and reviews for your video games ? Holygamerz.com is a group of video game fanatics who want to inform you about the best tricks, guides and tips. We offer you the best information to be a reference in gaming, so here you can find guides, tricks, secrets and tips so you can enjoy your games to the fullest. Are you ready to get all the achievements of that game that you resist so much? Enter now and enjoy your favorite video game to the fullest!
Horizon Chase Turbo Review - Traveling without moving ❯

Wasteland 3 Review: The story of the American revival continues

Ni no Kuni Review: The Threat of the White Witch