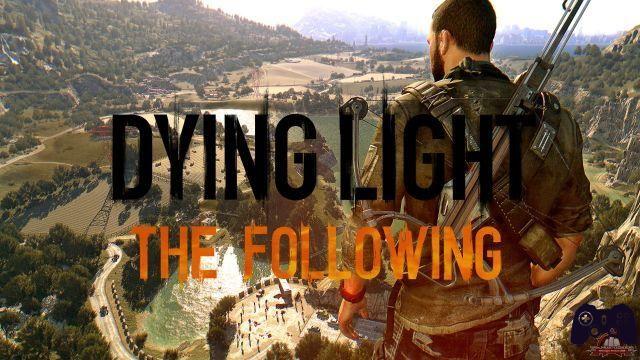 About a year ago Techland thanks to Dying Light had shown that, trivially, the curriculum of a developer (for better or for worse) does not give guarantees on what is the final result achieved once the title hits the shelves. Inevitably, however, after the excellent performance last February, the expectations for The Following, especially after the decision to increase the price foreseen for this expansion, they put the proverbial sword of Damocles on the head of the Polish developer. Let's find out if they came out unscathed again this time.

I want to go live in the country

The Following's story manages to be more interesting than last year

Once again the player plays Kyle Crane, now tied to the cause of the survivors of the Harran zombie epidemic and determined to find, day by day, a way to survive until the next dawn. The stocks of Antizin, the (temporary) antidote for the virus that causes the mutation, are however increasingly running out: Kyle therefore can only seize the ball when he comes across a man who, in addition to being in possession of a map capable of leading him out of the city, before dying tells him of a mysterious cult apparently immune to infection. On the trail of the "Mother", being venerated by these Sons of the Sun (this is the name of the sect), the player must then go to the "outside world" and try to win the sympathies of the population, with the aim of attracting attention of the cult and discover its secret.

If last year we had highlighted how the narrative aspect was not the strong point of Dying Light, The Following manages to square the circle and build (and tell) a story that is undoubtedly less anonymous than the classic zombie epidemic, guiding the player through the approximately 20 hours (depending on the selected game difficulty and the number of secondary activities that you decide to tackle) towards a double ending that leaves the choice to whoever is holding the pad in their hands. All this, however, relying on characters who, apart from the mystery behind the Mother, stage a performance comparable to that of last year (therefore not excellent but certainly functional to what happens on the screen).

Less parkour, but Kyle can drive an arcade dune buggy, nervous and fun to drive

Even from the point of view of the setting The Following changes a lot the cards on the table. The Harran in full epidemic gives way to the countryside surrounding the city, with implications that directly influence the gameplay of the expansion: parkour must have, given the fewer obstacles on a map that doubles in size and parallel to " empties ”in terms of density, it plays a minor role, almost at the margins, to make way for the main attraction of The Following. From the very first stages of the experience Kyle will in fact come into possession of a decidedly arcade flying dune buggy in hand, linked to a new special skill tree that will allow you to obtain while driving (or completing the challenges proposed by Dying Light while running around the campaigns, such as investing a certain number of zombies or maintaining a given speed) ability to build new parts, weapons or bonuses for the car. The buggy is to be considered to all intents and purposes a weapon in the hands of the player, and like these it will therefore require a regular investment of time as well as for upgrades (to be "crafted" and then installed) as well as for refueling, to be recovered from other vehicles abandoned on the map or from petrol stations, and above all maintenance. Every hit suffered, an obstacle hit or (especially at the beginning) off-road section will consume the components of the car, which require a certain number of screws to be repaired. Consequently, these become indispensable to be able to continue as much (and at times even more) of the rescue kits: running out of screws means not being able to repair your vehicle, with consequences that can also lead to the failure of some missions. In fact, we happened to be unable to complete a classic "timed mission" of the main plot due to a heavily damaged engine, and to restore the usual cruising speed of our buggy we had to spend a few attempts looking for the necessary to repair it .

The arch is now everywhere

If the Agility branch, as mentioned, accuses a bit of the change of setting to leave more space for that dedicated to driving, for the other two skill trees (Attack and Survival) the same is not true: the campaigns outside Harran are literally teeming with zombies. , which practically besiege every cultivated field occupying it en masse, thus leaving the player free to lead his hands or to rely on his weapons. In this sense The Following has further enhanced the arsenal that Kyle can draw on, introducing new recipes (which allow you to create new creations) and also a couple of "heavy" elements like bow and crossbow, which resume the gunplay of firearms (while paying a reduced range and "analog" and slower reload times) but on the other hand allow you to attack enemies in an almost stealthy way, without emitting noise and not even having to worry too much about ammo supplies. In addition to being trivially collected from the corpses of eliminated zombies and bandits, it is relatively easy to obtain arrows and darts, at least in their "basic" version (there are in fact several of the classic variants such as explosive arrows and piercing darts) through crafting, since the starting elements are not very difficult to recover.

The challenge is certainly not lacking

Another aspect not to be underestimated, in this sense, is the possibility of "bouncing" your character between The Following and the basic version of Dying Light, using in the original experience the weapons collected in the suburbs (and vice versa): not a revolution, but undoubtedly a useful approach to give a certain replayability even to the original experience. Especially because The Following from the point of view of the challenge is not joking and indeed, does not give the player anything, resulting damn challenging. It is no coincidence that Techland has set "in words" (the expansion can also be tackled with a lower level character) a minimum level of 18 to venture more or less quietly through the Harran campaigns.

A confirmation on the technical front, with some small improvements

From a technical point of view, we can only reiterate the good impressions we had last year, with the title of Techland capable of making a distant memory of the bugs, the freezes and in general all the stumbles suffered at the time by Dead Island at the same time offering a good visual rendering (quite scalable even on non-first-hair configurations if the level of detail is lowered) and also enriched in some respects by the release, in parallel to The Following, of the Enhanced Edition of the title, which of done replaces the version released last year (coming as a free update for all owners of the original Dying Light).

Verdict Yes Almost a Dying Light 2 Comment If you enjoyed the "basic" version of Dying Light, you will hardly be disappointed by The Following: the expansion offers a lot of content, tying them together (as Techland did not manage a year ago) with a story on balance always interesting and well told, not disappointing even with regard to the new additions, giving on the one hand a fun means of transport to drive like the dune buggy and on the other new weapons (where bow and crossbow certainly stand out). The only drawback is a parkour almost on the edge of the experience given the characteristics of the new setting, but on the other hand it was an inevitable maneuver unless you go to expire in the already seen. Pros and cons ✓ Lots of content
✓ Fun and challenging
✓ Narratively, this time we are x Parkour is inevitably used less
Do you want to be a video game expert and know all the tricks, guides and reviews for your video games ? Holygamerz.com is a group of video game fanatics who want to inform you about the best tricks, guides and tips. We offer you the best information to be a reference in gaming, so here you can find guides, tricks, secrets and tips so you can enjoy your games to the fullest. Are you ready to get all the achievements of that game that you resist so much? Enter now and enjoy your favorite video game to the fullest!
Special DmC Devil May Cry: Do you feel at least a little guilty? ❯

Add a comment from Dying Light Review: The Following