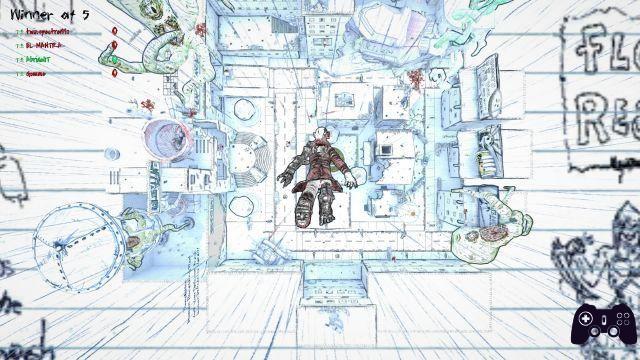 Drawn to Death practically brings back everything that made the first Doom a phenomenon: ultra violence, politically incorrect attitude and lots of action.

One of the main themes of this eighth generation of videogames is the rediscovery of genres and solutions that had disappeared from the radar. After the comeback of the two-dimensional (but also three-dimensional) platform, could the Arena shooter trend be outdone? David Jaffe e Drawn to Death they think not, and pad in hand (we anticipate it for those who have not yet taken the habit of scrolling down and looking only at the vote and for / against) we must agree with them. Even with all the limitations of the case.

Procedural Generation Comparisons (which is a nice way to tell bitch)

Drawn to Death has character. Then this may or may not like

It is practically since Drawn to Death was presented in pomp (not really so) that the latest brainchild of David Jaffe, evidently still not happy with his gore contribution to the industry due to Twisted Metal and God of War, that in the chat between fans goes crazy the race to see who finds the most unlikely yardstick for the whole. To win, hands down this time, were all those who for some reason have found points of contact between Drawn to Death and Splatoon, perhaps misled by an announcement actually close to the release of the Nintendo title. After having gutted Drawn to Death for a couple of weeks (for the benefit of all those who then say you can't judge a product from promotional material) we can rightly say that the two projects have practically nothing in common, not even the banal joke about the fact that in both you shoot your opponents. Whereas Splatoon is a title that hinges on the concept of team and group maneuvers, it lets itself be played in a more reasoned way and as mentioned it overshadows the number of kills that the player takes home at the end of the game, Drawn to Death goes to decline the experience within the shooter genre Arena invented by id Sofwtare with Doom and (above all) Quake.

In short, all the accusations of being Sony's response to the vision of the shooter proposed by Nintendo are returned to the sender. In a decidedly vulgar way.

It is not a title for all palates: vulgarity is not lacking

Vulgar because David Jaffe has undoubtedly forced his hand, proposing a decidedly 90s product from the point of view of mentality (Doom on PCs around the world, The Simpsons on TV and the politically incorrect customs clearance): Drawn to Death, just for this, does not have among its target audience the stereotype of the old lady in fur, member of high society and with the number of MOIGEs saved in the speed dials of their mobile. It is a raw product, always ready to break the fourth wall with insults to the player and more or less (very often, less) veiled sexual allusions. And the character of the production, as well as from the graphic cut (which we will discuss later, as usual) comes precisely from this immature attitude and beyond any redemption. Keep this in mind, when it comes to deciding whether to invest in Drawn to Death (not only at a monetary level, since the title was still given on loan for use to all PlayStation Plus subscribers): David Jaffe's title is ignorant from many points of view, and for this very reason does not suit everyone's palate. But if the acid aftertaste doesn't scare you, go ahead and take it easy.

Matchmaking at times embarrassing, without going around it too much

Excluding the vulgarity, the invitations to masturbate before entering the game and the jokes of dubious taste such as the parallel between RPG (the rocket launcher) and JRPG (a rocket launcher in the shape of SNES) Drawn to Death is un'oasis of action in the current desert landscape of the shooter Arena, which after the rebirth of Doom and awaiting the return of Quake and Unreal is not exactly the most inflated sub-genre on the market. An oasis where, let's be clear, the water is not crystal clear and there is no lack of style drops (and we are not talking about swear words), but still useful as a refreshment point for all fans. The main culprit, however, does not bear the name of the demon of microtransactions, as one might think by listening to prejudices: in Drawn to Death he puts his hand to his wallet essentially to shorten the time and unlock the weapons of interest without having to accumulate blood keys game after game, with the possibility of trying all the arsenal in the appropriate tutorial (or in the free mode) and all the characters available immediately. Those who want to remain among the non-paying spectators must do no more and no less what they would do in any shooter: play, so from this point of view you can't be too angry with the title. The really hard thing to forgive is rather matchmaking, truly capable of destroying the good done under the other aspects of the game. Not only is it not possible to decide in advance which mode to play (which oh well, in fact they are essentially all variants of the classic deathmatch, when it is not directly the classic deathmatch), but the waiting times are fluctuating and often and willingly not they respect - even by a lot - the estimated times in the interface to enter the game. Not exactly encouraging problem, given that it is an experience aimed entirely at online and that in any case on paper, potential players should not be missing, given that Drawn to Death was the undisputed star of the Instant Game Collection in April. 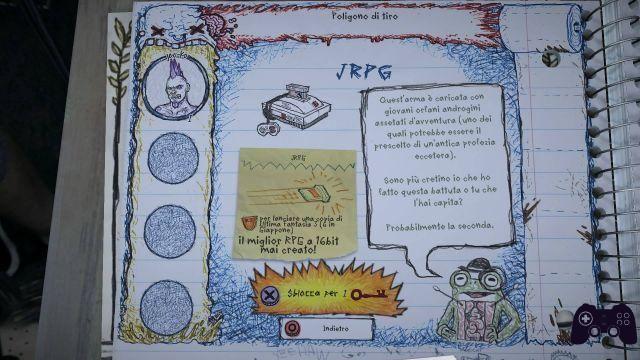 The gameplay, however crude, works and has fun: pure Arena

A pity, however, because Drawn to Death undoubtedly has a varied and fun play structure. Each character has two weapons (plus two more, to be interchanged, which can be collected on the map) and two unique attack skills and one movement that characterize him, obviously taking up the ironic style with which the rest of the game is packaged. 'work: Ninjaw, a shark in skimpy Japanese-style clothes, can for example strike anchor (literally, since she uses an anchor), slowing down enemies' movements and throw them sharks that inflict damage, as well as use her grappling hook to move quickly from height to height or scale the maps available, they do extensive use of verticalization and secret passages. But no less fun (both "on paper", in terms of concept, and to be used on the field) are the other cast members, who play and desecrate stereotypes passing from Cyborgula (a vampire cyborg) to Diabla Tijuana, a satanassa with a clearly Mexican. The contents, especially if you consider that everything is sold for € 19.99, in short, there is no shortage of it, and even if at the beginning the balance between the various pieces on the board felt the weight of some gaps the developers have (up to now, at least) held firm e continued working on the package, arranging and finishing everything.

Across the devil's plain

And we come to the other strongly characterizing aspect of Drawn to Death, which as you can guess from the name is precisely the "trait" with which everything is created on the screen. Jaffe and his have literally animated doodles, of those that any of us when he was a listless student created in their notebooks: the final result in this case too is rough, taking on peculiarities that may or may not like depending on the player's tastes. Undoubtedly, however, the whole becomes a distinctive note of the production, while offering the side when looking for clarity in what is happening on the screen. In any case, the performances (also aided by having to design very simple elements) they settle on a good level, and hardly the fluidity of the whole is missing even when you shoot madly with your JRPG filling the scenario with dragons and fantasy creatures drawn in real time.

Verdict 7/10 Sony's sad Splatoon? Oh well Comment With all due respect to its detractors on principle, Drawn to Death eventually manages to carve out its own identity on the screen. Then whether you like this identity or not is beyond doubt. Those who are abstinent from Shooter Arena would do well to give them a chance, for all the others, however, the above is valid: it is a very pushed, vulgar game that does not hesitate to resort to gimmicks of dubious taste in order to snatch a smile, and the screen result is rough most of the time. But it's all part of the game and the production DNA - it's up to you to decide whether to be in or out. Pros and cons ✓ Humor not for everyone
✓ Fun and adrenaline-pumping
✓ Budget price x Humor not for everyone
x Sometimes rough
x Shaky matchmaking
Do you want to be a video game expert and know all the tricks, guides and reviews for your video games ? Holygamerz.com is a group of video game fanatics who want to inform you about the best tricks, guides and tips. We offer you the best information to be a reference in gaming, so here you can find guides, tricks, secrets and tips so you can enjoy your games to the fullest. Are you ready to get all the achievements of that game that you resist so much? Enter now and enjoy your favorite video game to the fullest!
Batman: Arkham VR review ❯