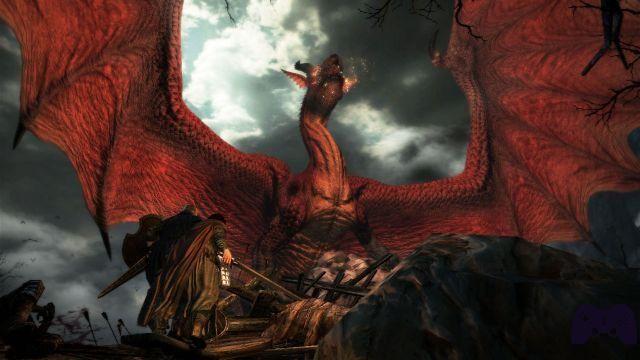 The light of the candle next to me illuminates an unknown ceiling… “Where am I? Why was I sleeping here? " are the first questions I ask myself, but as soon as my mind looks into the memories I ask myself a much more important question "How can I still be alive?".
I sit up while I retrace what I thought would be my last moments of life: the normal day in the village, the arrival of the dragon, my attempt to distract him and finally his claw that tears apart my chest ... At that thought the my gaze lowers and confirming that it was not just a dream I find not only my shirt torn and soaked with my now stale blood, but also a deep scar that runs along the entire chest.
As I check the scar wondering how long it may have been unconscious I realize I can't feel my heartbeat! The dragon didn't just open my chest, he also took my heart! How can I still be alive without it? And what is the reason for this gesture of yours towards me?
But there is no time for answers, as soon after this realization a faint light springs from my chest, and within me again I hear the voice of the dragon that challenges me to visit him to reclaim my heart, and as he calls me he doesn't use my real name, he calls me Arisen.

At the beginning of the actual game, Dragon's dogma we will propose an in-depth editor of the protagonist, in which we could determine the classic values ​​such as sex, musculature, height, weight, skin and hair color and obviously the features. This system, in addition to customizing the physical appearance of the character as happens in many other games, also gives very small advantages in the game, for example a very small character in an area will be able to pass through the tunnels of the goblins arriving behind the enemy while a very fat character in another area can activate the pressure switches without having to rally the entire party.
After selecting the character, a sequence of events takes place that sees us confer the title of Arisen, that is the one who according to the legends is the chosen one "cursed" by the dragon who is destined to put an end to his threat.
At that point, after a hasty choice between the three possible base classes, we could leave for the capital in search of information on the location of the dragon.

We will not be alone in this adventure, since the Arisen has the power to enter into communication with the "pawns", pandimensional beings with a human aspect but apparently without a soul, who appear in the world of Gransys, and who for no apparent reason seem voluntarily surrender to the service of the "chosen ones of the dragon". Immediately after having deepened the commands and having explored the surroundings of our hometown we will finally reach a camp, after we could get our special pawn, customizable both in appearance (with an editor equal to that of the main character) and in the character. In addition to him we could enlist two other pawns of other players to get to have a party of 4 people.
To recruit other members we would basically have 2 possibilities:

Obviously, our pawn can also be requested in service by another player, who will bring back with him the experience acquired when he is dismissed, and if he has done a good job, even a gift from the other Arisen.
This game mode allows us to always have a perfect pawn for every situation and the demanding of the moment based on characteristics such as sex, level, class, characteristics but above all skills!

As already specified at the beginning of the game, you can choose whether to be a sword and shield fighter, a wizard from sticks and spells or a double dagger and short bow hunter. Each time you level the characteristics increase based on the class currently in use, in addition to this each class has an autonomous leveling system that allows the purchase of new skills, which are divided into class skills, immediately usable only with each class in possession of that skill, and global skills, which once unlocked can be equipped in the free slots of the character and work regardless of class.
In addition to these three basic classes, once an adequate level is reached, the advanced classes will also be unlocked, respectfully the warrior with two-handed weapons of destruction, the sorcerer focused on the very powerful but also slow offensive spells and finally the archer, an extremely focused on the use of the longbow.
All these classes are available to both the protagonist and his pawns, but in addition to these, the Arisen has access to mixed classes. For example, the mixed class between the fighter and the magician is the paladin, a powerful warrior armed with mace and enchanted shield able to quickly enchant the group's weapons and unleash powerful combinations of non-elementary magical attacks and physical attacks, instead the mixed class between the magician and the hunter is the arcane archer, the magic arrows of his enchanted bow hardly miss the target and are of great help in hitting the flying enemies or the faster ones from a distance, finally the mixed class between warrior and hunter he is the assassin, a class capable of using a large number of different weapons in order to adapt to any situation, and with different damage bonuses against enemies unaware of his presence.

As soon as the adventure has begun, the first series of main missions are basically used to learn the dynamics of the game and combat: in addition to the classic "light hit / heavy hit" you can buy skills by spending Character Points, and it is this skill that they differentiate and characterize the approach to battle. The variety of Skills is adequate to the needs and we go from rains of arrows to loaded shots for archers, from slashing to counterattack for warriors and as regards the spells we go from simple healing spells to fireballs, without forgetting the all-important support enchantments, which can also enchant the weapon of their companions with different elemental forces. Another peculiarity is the ability to cling to the body of larger enemies to get to hit their weak points, which makes the fight against the game's huge monsters even more epic. The main plot of the game continues in a substantially linear way until it reaches Gran Soren, the capital, it is mainly at this point that the true soul of Dragon's Dogma reveals itself, showing an open world of considerable size, completely explorable without particular limits. The number of side quests is quite high in number, but unfortunately not in variety, since we will find ourselves being able to choose between a meager choice of missions ranging from escort missions (very useful for knowing the game map) to recovery ones of objects.

Verdict 8.5 / 10 A good cross between JRPG and WRPG Comment For a long-lived Action RPG this title oscillates between good ideas and poor attention to detail, among which I want to cite as an example an insufficient internal glossary of monsters. For heaven's sake, it remains a good debut, effective and full of excellent intentions for the future but, to interest everyone, it would undoubtedly need something more. On the other hand, I am sure that fans who will be able to turn a blind eye to certain lightnesses, and will be able to experience memorable moments in this title that could steal many hours from them. Pros and cons ✓ Epic fights against mythological creatures
✓ Dynamic and innovative Pawn System
✓ Extensive game map x Graphical sector that can be improved
x Fights at times chaotic and with slowdowns
x Apparently banal plot that is slow to mesh

Do you want to be a video game expert and know all the tricks, guides and reviews for your video games ? Holygamerz.com is a group of video game fanatics who want to inform you about the best tricks, guides and tips. We offer you the best information to be a reference in gaming, so here you can find guides, tricks, secrets and tips so you can enjoy your games to the fullest. Are you ready to get all the achievements of that game that you resist so much? Enter now and enjoy your favorite video game to the fullest!
News Alien: Isolation coming to Switch ❯