Originally released on PlayStation  way back in 2000, Dragon Quest VII it is par excellence one of the most full-bodied and long-lived chapters of the series, a real videogame odyssey. The announcement of a remake on Nintendo 3DS, following in the footsteps of the Zenithia (Dragon Quest IV, V and VI) arrived on Nintendo DS in recent years, it has raised a bell in all those players who, due to the failure to distribute the original title in Europe, have seen in this new edition the perfect opportunity to get their hands on Dragon Quest VII.

Despite the interest of the public, so much so as to press Square Enix on all fronts, from social networks to various online petitions, it took almost 3 years from the Japanese release to have, during the last E3, a definitive date for Dragon Quest VII: Fragments of a Forgotten World, which will finally be available from September 16th on Nintendo 3DS.

Life on the island of Estard flows quietly. Maybe too much for Keifer, young prince of the kingdom e oyster (default name of the protagonist) who, bored by the quiet life, spend their days trying to discover something of the world around them and the island on which they live, which according to legends seems to be the only land emerged on the continent. This will not stop the two, who, driven by curiosity, will end up bringing the ancient to light Temple of the Mysteries. In this mystical place, they will be indoctrinated by a curious purple creature, who will explain to them that it will be possible to visit "other worlds" by putting together some magic tablets. Without batting an eye they will find themselves catapulted to an island never seen before, accompanied by the petulant Maribel, friend of the boys eager to be involved in their secret explorations.
After helping the islanders and returning home safely, they will discover that there is a link between their world and the tablets: through the Union Hall in the Temple, you can travel back in time and solve people's problems. . By doing so, it will be possible to bring out new islands and perhaps discover the mystery behind their disappearance.

Thus begins Dragon Quest VII, an epic adventure in which the trio of protagonists will have the opportunity to meet bizarre characters and experience unique stories, between kidnappings of girls, completely petrified villages or love dramas worthy of the best South American soap opera. It will not be difficult to get passionate about the various subplots, some of which are connected to each other, and discover the changes that have taken place over the years since our intervention, all seasoned with the classic humor of the series, which allows you to face the game with a light heart and get a loud laugh on more than one occasion.

What distinguishes this chapter of Dragon Quest is precisely the rich narrative style, which diversifying from island to island, he always manages to keep the attention towards history high, a task not so easy, much less obvious, given the enormous duration of the game, which for the main quest alone will require over 100 hours of play to get to the end. It will be right the strong characterization of the characters to drive the entire adventure, so much so as to almost completely obscure its main protagonists, some of which will appear as specks, without being able to carve out a real space within the narrative arc. Even the story behind Dragon Quest VII, the one behind the rediscovery of the world will be slow to reveal itself, showing from this point of view a rather slow general pace, diluted even more by the continuous alternation between past and present, and a backtracking that, especially in the first hours of the game, feels heavier than ever. Suffice it to say that in order to face the first clashes, at least a couple of hours will pass to get to the heart of the action, however less time than the original chapter which proposed a much slower and more articulated prologue. 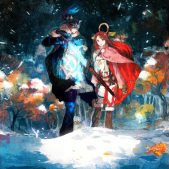 To learn more:
I Am Setsuna

Once it gets underway, this remake re-proposes the typical formula of the Dragon Quest series, with a new graphics sector updated to the possibilities offered by Nintendo 3DS and some adaptations to the balance of the game, particularly reviewing the original class system and adding some new features to enrich the already "large" amount of content.
But let's start with order. Dragon Quest VII is a classic-style JRPG with turn-based combat. In each turn it will be possible to perform different actions ranging from inflicting a physical attack (with the possibility of involving even more enemies at the same time), to casting spells by drawing on the MP or using special techniques. We can also use healing items. as long as these have first been assigned to the character we want to use.


To give depth to this game model we find a system of classes that adds another piece to the gemeplay, allowing you to develop characters according to your needs and fighting style. The classes, here you call Vocations, will become available after a certain point in history (approximately 30 hours) when we have access to theMutationis Abbey. Switching from one vocation to another means not only improving the characteristics of the characters and their statistics (attack, defense, etc.) but also unlocking new skills and techniques that will remain permanently for use by the character once the maximum level of mastery is reached. Basically we will have 10 classes available, which once completed will give space to Advanced Vocations, more powerful and with better features. To maintain some balance between classes, skills / techniques learned with Advanced vocations will take effect as long as this is equipped. During the game it will then be possible to get hold of Monster hearts, special objects that will allow us to take on the appearance of the creature to which the heart belongs, taking advantage of its unique moves and characteristics. A system so rich and varied that it touches over 50 classes, pushing the accelerator to the extreme versatility of an apparently extremely classic and rigid gameplay.

1 2
Do you want to be a video game expert and know all the tricks, guides and reviews for your video games ? Holygamerz.com is a group of video game fanatics who want to inform you about the best tricks, guides and tips. We offer you the best information to be a reference in gaming, so here you can find guides, tricks, secrets and tips so you can enjoy your games to the fullest. Are you ready to get all the achievements of that game that you resist so much? Enter now and enjoy your favorite video game to the fullest!
Guide Complete guide to sea creatures - Animal Crossing: New Horizons ❯

Everhood Review: A Journey to Enlightenment

Add a comment from Dragon Quest VII Review: Fragments of a Forgotten World