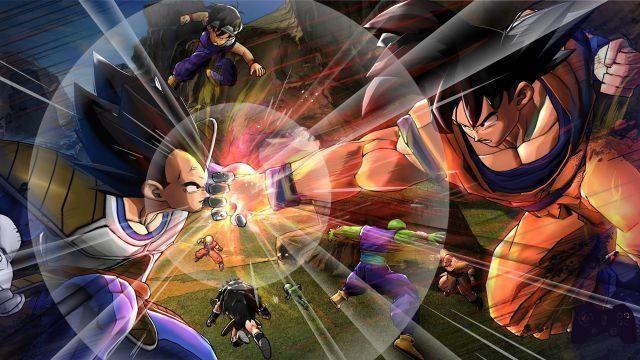 Among the various videogame tie-ins derived from the Japanese comic and animated series, those inspired by the Dragon Ball universe have always, for better or for worse, tried to introduce new features and vary the formula every certain number of chapters. From the beginning on Playstation 2 and GameCube with the Budokai series (which we told you about in the review of the Budokai HD Collection) to the latest Dragon Ball Z Kinect, the series has gone from two to three dimensions and has allowed itself to be contaminated by genres such as 'action and to a lesser extent by the RPG, while maintaining a fighting game base at meetings. Dragon Ball Z: Battle of Z tries to shake the saga even deeper, proposing for the first time four-player modes and a gameplay focused on cooperation and trying to redeem the work of Akira Toriyama from the misstep of Ultimate Tenkaichi.

The story mode of Dragon Ball Z: Battle of Z unfolds through 60 missions divided into ages that cover all the main manga sagas (in addition to the classic What if? And extras related to the latest film released, Battle of Gods). The big peculiarity of this chapter is the possibility to relive every Dragon Ball event both from the point of view of the Z Warriors and impersonating the villains as Freeza and Cell. The roster is divided into 67 characters, transformations included, to which must be added Super Saiyan Bardock and Vegetto only available as DLC (currently available in the West only by pre-ordering the game). Most of the battles have as their objective the defeat of all the opponents present in the scenario, even if there are variations on the theme how to survive for a certain period of time or eliminate a particular target (despite the presence of supporting actors to give him a hand ). These missions against teams of enemies are interspersed with encounters against real Godzillian-sized monsters such as the Oozaru (the "were-monkeys" into which the Saiyans transform when they look at the moon) or other antagonists taken from the OAV (Original Anime Video, the "Films" related to the series). In these four-to-one phases the goal is to break the guard of the colossus by attacking one of its limbs or to the head and then rage when it is stunned. Each of the 60 missions can be tackled in single together with 3 other CPU-controlled characters or in multiplayer (online or, in the case of Playstation Vita, even local) by joining other players, with whom it is also possible to fight in versus encounters (always at teams of four players) disconnected from the plot as in any self-respecting fighting game. It is possible to communicate with other players through the integrated voice chat or through pre-set messages that can be used through the directional arrows.

The importance of the role

From the point of view of the gameplay, as mentioned at the beginning, Battle of Z represents a sort of breaking point with the three-dimensional chapters released previously. The basic mechanics from fighting to encounters are flanked by elements typical of the action-rpg: each character now belongs to a class (melee, support, interference and aura strike, with some characters also belonging to two categories) that characterizes two of the four special moves at his disposal. Melee characters will feature devastating melee combos, while members of the support class will boast techniques that can restore the health of others. Interference characters will instead rely on moves designed to disturb opponents such as Taiyoken (the "Sunstroke" in the Spanish translation of the anime) or to "steal" the health points of the rivals when a support tries to restore them. Aura Strike Fighters on the other hand will specialize in ranged energy attacks. In addition to the class, the power levels and statistics that detail the characteristics of each character intervene to further differentiate the different characters, on which it is possible to act by "equipping" in the available slots (inversely proportional to the combat level) some cards designed to enhance strength, health, aura, etc. There are also some special cards, which are reserved for two slots in each equipment, which allow you to add more strategic features (it ranges from "normal" stat increases to special bonuses such as automatic parry which correspond to decreases in power or other penalties). Finally, there is also an experience-based progression system that acts as an "access barrier" to the most powerful cards, which must therefore be earned on the field as well as unlocked.

The downside of this more cooperative approach is all reflected in the battle system, whose basic structure is quite impoverished compared to the previous releases of the series. In order to make the combos longer and more complex the prerogative of melee characters only, it was decided to simplify the attack commands, which can be executed by pressing only the triangle button and not combinable with the directional or square buttons as was the case in the Tenkaichi series on PS2 or on latest Raging Blast. In Battle of Z, only melee characters can perform longer series of attacks, combining basic attacks with personal physical techniques. Another typical element of the three-dimensional chapters that has been partly overshadowed is that linked to the "teleports" behind the enemies that can be performed by pressing the parry button with the right timing, eliminated and replaced by counterattack techniques that can only be used by some characters. Another lack is that of the possibility of transforming during battles, due to the need to differentiate the "basic forms" from their evolutions in terms of the number of slots. The steps backwards on the battle system front, however, go hand in hand with the inclusion of new entries designed for multiplayer gameplay which make the cooperative experience a truly successful aspect, thanks to the inclusion of Synchro attacks (deadly combinations in which two or more characters attack the same target at the same time) and pursuit attacks, where the enemy in turn is thrown away and continues to throw "in turn", without forgetting the possibility of giving part of one's aura to companions or receiving some from them, which makes the “choral” aspect even more successful and placed in the context of the series. All this is completed by a management closer to the logic of the original series, where (given the impossibility of "charging" the aura and then performing the character's special move but it is necessary to accumulate it with blows) it is not reduced to the wicked use of energy attacks but exploits them in a more reasoned and tactical. Ultimately, a battle system that is certainly successful and suitable for its purpose despite some simplifications, which finds its biggest flaw in the not always punctual camera, a sore point also in the previous chapters and now a real congenital defect.

Saiyan (not too) trendy

If (as mentioned above) from the point of view of adapting the characters to our style of play on the played front, ample freedom has been left to the player, the aesthetic customization could certainly not be outdone: it is in fact possible to change the colors of each "piece" of the hero (or villain) costume chosen according to one's personal taste, creating a potentially unlimited variety of outfits. This possibility, however, does not hide the lack of alternative costumes for the characters, who can therefore “wear” only the same dress, even though it has been altered at the RGB level.

As for the technical realization of the product we are facing a title absolutely up to the previous ones thanks to a decidedly well-finished and successful glance, which packs graphics that are truly pleasing to look at. The only problems concern the drop in framerate which is encountered not so much in the single player mode as in the online co-op, which can sporadically afflict the experience.

Verdict 7.5 / 10 Nana Nana Nana Dende! Comment Dragon Ball Z: Battle of Z is an overall successful product. What is lost from the point of view of the naked and raw battle system is a "necessary sacrifice", even if at times perhaps too drastic, to fully marry the cooperative mechanics typical of a certain type of action-rpg. All this flows into a gameplay that certainly hits the target and finally gives a product more in line with the canon of the series, undoubtedly recommended to all lovers of the series but able to give something even to those who are not very familiar with the work of Akira Toriyama. In short, a good point from which to start again for the next chapters, inaugurating a new trend that winks at the multiplayer cooperative, certainly properly adapted to the context of Dragon Ball Pros and Cons ✓ Graphically successful
✓ The gameplay brings co-op to Dragon Ball and has fun ...
✓ Wide range of customization ... x ... But few costumes to choose from
x Occasional slowdowns when playing online
x The battle system takes a few steps back from the old chapters
x Usual camera management problems "

Do you want to be a video game expert and know all the tricks, guides and reviews for your video games ? Holygamerz.com is a group of video game fanatics who want to inform you about the best tricks, guides and tips. We offer you the best information to be a reference in gaming, so here you can find guides, tricks, secrets and tips so you can enjoy your games to the fullest. Are you ready to get all the achievements of that game that you resist so much? Enter now and enjoy your favorite video game to the fullest!
Special With Pad in Hand: Sales rankings from 25/09 to 01/10 ❯