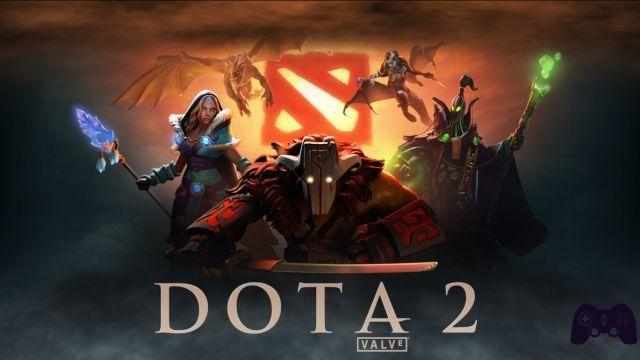 Initially just a custom Warcraft 3 map, the original DotA (Defense of the Ancients) later became a reality as a standalone game. In 2009 IceFrog, the developer of the custom map, was hired by Valve, which the following year managed to release the beta of Dota 2. After 3 years of testing, the game is definitively released becoming a mass phenomenon, like its bitter rival league of legends. What made and what makes Dota 2 so brilliant?

Let's start with the basics: the title in question is a MOBA. Anyone who doesn't know what it is has probably been living in a cave on top of a mountain for the past few years. Seriously, a MOBA (Multiplayer Online Battle Arena) is a 5vs5 team game, where multiple players collide in a closed map with the aim of destroying the headquarters.

(called Ancient, in Dota's case) of the opposing team. The player can control only one Hero and with the passing of the minutes he acquires gold and experience, with which to buy items to upgrade and acquire skills to decimate enemies. Nothing complex, apparently. Instead, Dota 2 is the most complex a MOBA can currently offer, thanks to very deep mechanics such as pulling, stacking or denying. However, we will talk about this later. Despite being complex in terms of gameplay, it is in fact much more accessible to the user as content. Dota 2 is truly free-to-play. The 108 heroes are available immediately, ready to be used. The only money you will shell out will be for the aesthetic customization of the characters, which does not change the gameplay in any way.

What doesn't kill us, makes us stronger

Once the Dota 2 client is started, a half hour long tutorial awaits us. However, it does not explain in an efficient way what awaits us once in the game, but rather makes us take actions for their own sake that risk confusing a new player. The problem is easily solved, thanks to the possibility of training with the Bots and then begin to understand how a match works. Finished the tutorial? Well, now you can start your multiplayer games.

Climbing the score is an exhausting and very long journey, sometimes impossible

There are two types of research: we can play in normal games or in ranked games. The latter are unlocked at level 13 (after about a hundred hours) and, once we have played 10 calibration games, they allow our account to have a score. This value represents, or rather should represent, our "skill" in the game. The account rank is usually 4 digits and for each ranked match you win 25 points, which will be deducted if you lose. Climbing the score is an exhausting and very long journey, sometimes impossible, since the system is at least revisable. Not only are there all kinds of abuses to rank up quickly by players, but the game tends to anchor us not too far from our current score. Don't get us wrong, a better-than-normal player still manages to rank up in the long run. Very long. Let's find out what else the main menu offers: you can visit the library, which contains all the information about the heroes and objects, and we can also peek into the client's shop, which allows you to buy hero sets, announcers, couriers and many others objects to personalize your experience. We have the possibility to watch the most important tournaments, both for free and with the purchase of a ticket, as well as create our own builds of items and skills for the heroes or even form our own team. In short, the menu is well orchestrated and you will hardly get lost in its meanders. 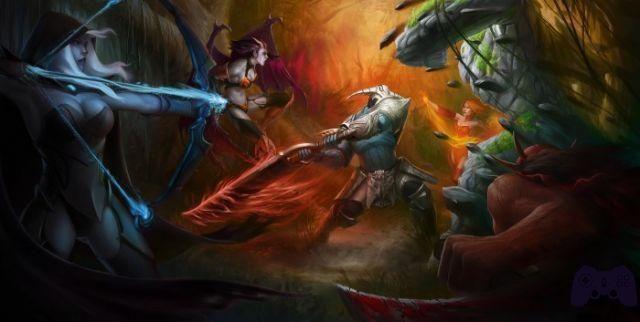 Okay, here comes the juicy part. The choice of game mode is very important: we go from a simple All Pick, which allows us to choose any hero without any problems, to the more intricate Captain's Mode. The latter is the mode used in tournaments and once the team captain has been decided, he is responsible for the hero picks and bans for our team. The available modes do not end there, but they are so many and varied that we would need an entire dedicated paragraph. Once all 10 players have connected to the game, we can choose our hero (suppose we are in All Pick, the most played mode).

The heroes are distinguished by role:

Have you chosen wisely? Well, because you've probably got the wrong hero, this being your first game. Nothing to fear, we've all been there. The difficulty curve of Dota 2 is incredibly steep. It takes months to be able to understand all the mechanisms and a lot of hours to get a good decision making. The spawn will take place in your base and, once you have bought the starting items, you can decide whether to go to Top Lane, Mid Lane, Bottom Lane or Jungle depending on the character you have chosen. At 0:00 the Creeps will spawn, in fact your army, and from there on your path starts. Matches usually last between 40 and 50 minutes, so make sure you can take a match to the end before playing. We mentioned stacking, pulling and denying earlier. The mechanisms that make Dota 2 deeper than the competition are precisely the three mentioned above. Without going into specifics, stacking is the process by which we manage to double the experience and gold we receive from the Jungle. Pulling is a mechanism that allows you to pull your Lane back, allowing the Carry to farm, which means receiving gold and experience, in peace. Denying, on the other hand, is essentially linked to the farm. To earn gold you need to inflict the final blow on the Creeps, and Denying works in the same way. They simply hit their armies to death, effectively denying enemy players money and experience. Let's move towards the end of a normal game. If you have a good advantage and have already destroyed the 3 towers present in that Lane, you can destroy the Barracks of your enemies. What are they and what is the use of shredding them? They are nothing more than the respawn point of the Creeps. Destroying the opponent's Barracks will allow your team to have the Megacreeps (enemy soldiers will still spawn). The latter, as you can well understand, are much stronger than normal armies and will simply end up destroying the enemy base little by little. Community is very important in Dota 2 and that is why at the end of the match (but also during, in reality) you can make a report or a commend, both of the enemies and of the allies. The report consists of reporting misconduct to Valve, while commend is a reward you give to a player who has performed particularly well in any field. Did you win the match? Well done! Once you bring home a game you will receive experience points for your account (at level 13 you can start ranked games, remember?) With which to level up.

The eye (of Skadi) also wants its part

From a purely visual point of view, Dota 2 is a great sight. The image is crisp and clean, thanks to a high-impact style. The video settings are many and the game is highly customizable thanks to the Source engine. With a little trick it is also possible to use Source 2, currently in the testing phase. This drastically reduces the time of game uploads, as well as eliminating the small bugs that plague the experience from time to time.

the game is highly customizable thanks to the Source engine

The sound is a touch of class: in addition to being customizable through the Store, the sounds you will hear will begin to be part of your life. You will often remember a hero's catchphrase or the start of the game signal, as well as the sounds of battle with Roshan, the strongest Creep in the game. Everything is designed so that the player cannot disconnect from the PC and, believe us, the result has been more than achieved. While the community is waiting for the release of patch 6.82, which should bring countless changes to the gameplay, Valve is about to launch new content for the game: right now it is waiting for the release of an Arcana set, rare and expensive items. which also modify the animations of the hero, for the hero Phantom Assassin. Not only that, but a new physical model for the Faceless Void hero has also been announced. The game has been constantly changing for years now, and Valve follows what the community wants. The secret is just that.

Verdict 9/10 Welcome to Dota, you suck. Comment Dota 2 represents the best that the MOBA genre can offer. So on the spot, we highly recommend it for its gameplay bordering on perfection, its exquisitely pro user and its difficulty curve. Steep, but cleverly structured. If you have a lot of free time, throw yourself into this gem. You will come out months later completely changed, perhaps with a very long beard and with flies buzzing around you. Good luck, have fun. Pros and cons ✓ A true free-to-play
✓ Tactical and very skill based gameplay
✓ Constantly updated
✓ Probably the definitive MOBA
✓ Technically more than good x Your social life will be drastically reduced
x The rank system is deficient
x No new heroes compared to the original DotA
x Anything but noob-friendly
Do you want to be a video game expert and know all the tricks, guides and reviews for your video games ? Holygamerz.com is a group of video game fanatics who want to inform you about the best tricks, guides and tips. We offer you the best information to be a reference in gaming, so here you can find guides, tricks, secrets and tips so you can enjoy your games to the fullest. Are you ready to get all the achievements of that game that you resist so much? Enter now and enjoy your favorite video game to the fullest!
Conga Master Party Review ❯

Ori and the Blind Forest review