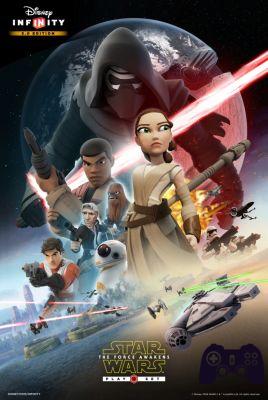 It's now been a week since our Preview of Star Wars Episode VII and from its release in all the cinemas of the world, and the beginning of the new cosmic trilogy is already making fans and detractors discuss (as we had foreseen in our special). The third official Disney Infinity 18 playset took care of the film in US theaters last December 3.0th. After the one dedicated to Inside Out, and that of the Original Trilogy entitled Together against the Empire, it is the turn of The awakening of the Force, which comes in the classic € 34,99 formula containing the play set and miniatures of Finn e King. On the other hand, Kylo Ren and Poe Dameron (€ 14,99 each) and the power disc dedicated to the film by JJ Abrams (€ 9,99 for 4 discs) are sold separately.

The Awakening of the Force, is based, needless to say, on the film currently in theaters, proposing some of the highlights (not all) and changing others to ensure that you can face the entire play set even with a secondary character like Poe or the bad Kylo Ren. You will then find yourself in a toy version of all the main settings of the film, and in each of these you will have a series of missions to face both plot and secondary and obviously collectible to collect.
The structure of the whole adventure does not differ from what we have seen  The Twilight of the Republic, the planet is the main hub of the missions, and you can move thanks to the spacecraft present (Millennium Falcon included) between one hub and another. Among the collectibles, over one hundred electricity-eating monsters, the character coins return, which once collected allow the use of the specific figurine in the set of The Awakening of the Force.

The main plot can be concluded in just under five hours, while net of the extras and secondary missions, The Awakening of the Force earns at least another afternoon. It should be remembered for the most cynical, that we are still faced with a title designed mainly for a very young audience, and that therefore both the overall difficulty and the complexity of the missions are designed mainly for that specific audience.

All very nice but the swords?

The gameplay of The Force Awakens is mainly the same seen in the main game, so we will focus on the qualities of the three characters used during our six hours of play and we refer you to the aforementioned review of Disney Infinity 3.0, for general considerations.
Rey and Finn have mainly the same qualities: the girl fights with a stick and has a gun at her disposal, while the young man punches his way through and uses a blaster to practically the last play area, where he will get hold of the lightsaber and will use it in physical combos.
Unfortunately, unlike Kylo Ren who makes strength and fencing techniques the focus of the character, Finn will limit himself to one shot, not leaving the player free to choose whether to use the blue blade or the rifle. Worst fate fell to Rey, who  will only use the sword in a movie and never in the Play Set, the two will likely receive an updated version in the coming years when Episode VIII hits theaters. 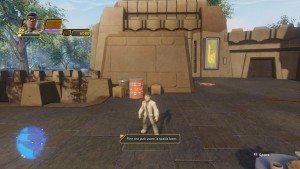 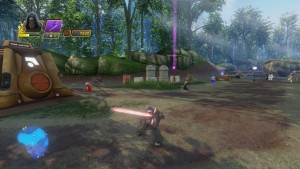 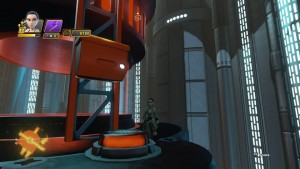 As for the original game, the graphic sector of The Awakening of the Force transforms all the characters into the protagonists of Star Wars Rebels, giving them a cardboard and toy look in full Disney Infinity style. Han Solo and Chewbacca also get a new look as seen in the film, although neither of the two old protagonists will be usable in this version (easily avoidable by creating a power disc for Han's alternate costume). The voice actors also do their duty, although both Finn and Rey do not enjoy the same voice as the film (A contrary to General Solo and Kylo Ren), note that in the original they are instead voiced by Daisy Ridley and John Boyega, the official actors. de The Awakening of the Force. The soundtrack instead covers the tracks of the other two Star Wars PlaySets (the final battle with Kylo Ren has Duel of Fates as a background) but is still suitable for the occasion.

Verdict Yes The Force is calling, let it in Comment The Force Awakens is recommended for those who want to complete the Disney Infinity 3.0 miniatures collection, as it is the only way to get Finn and Rey. The Play Set can be played for about seven hours, although it is undermined by some unhappy (often stylistic) gameplay choices such as the absence of the aforementioned characters' swords or the impossibility of using the Han only from Episode VII. Especially recommended for young audiences who can once again have fun piloting the Millennium Falcon in the toy galaxy of Disney Infinity. Pros and cons ✓ Perfect for the little ones
✓ Quality dubbing and soundtrack x Some unfortunate gameplay choices
x Short term

Do you want to be a video game expert and know all the tricks, guides and reviews for your video games ? Holygamerz.com is a group of video game fanatics who want to inform you about the best tricks, guides and tips. We offer you the best information to be a reference in gaming, so here you can find guides, tricks, secrets and tips so you can enjoy your games to the fullest. Are you ready to get all the achievements of that game that you resist so much? Enter now and enjoy your favorite video game to the fullest!
Football Drama Review: The true face of football ❯