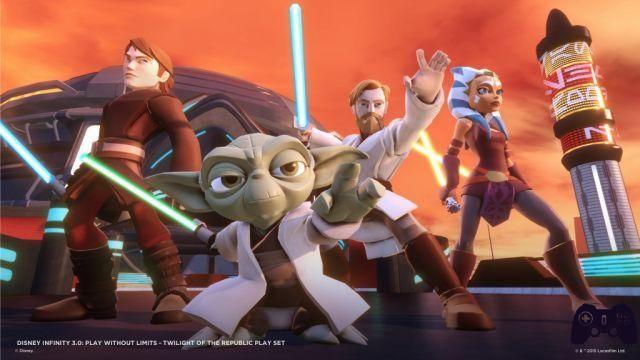 A long time ago (September 2013) in a far distant galaxy (planet Earth), The Walt Disney Company published the first chapter of the definitive Toy-Box whose only limit was the imagination: combining at the time only the Disney and Pixar franchises, it brought to the homes of fans of animated films and millions of children of the figurines depicting Sulley among others , Jack Sparrow, Mr. Incredible and Mickey's Apprentice Sorcerer. In a succession of success that would be the envy of Activision's counterpart (until then the only exponents on the Toys to Life market) last year Disney Infinity updated to version 2.0, introducing more than new Disney characters, an avalanche of super heroes (and super villains) Marvel, and further enhancing the gameplay of the parlor title. It was logical to think that in the third chapter, it hit the shelves last 27 August, would have joined the last great IP of the house of Mickey Mouse: the universe of Star Wars, which this year will return to the fore both in theaters on December 16, and on consoles on November 19 with the new chapter of Battlefront.
Disney Infinity 3.0 brings with it numerous innovations, in addition to the inevitable additional figurines and playsets (we will soon talk to you separately about the one dedicated to Inside Out), and after an in-depth journey of the new Toy-Box and having sifted through the Starter Pack of this new version, we are ready to talk to you about it as usual.

Welcome to the family

With Disney Infinity 3.0, Avalanche Software wanted to meet the numerous criticisms made by the "older" players and offer an even more varied and complete gameplay: to do so, it called in several teams for assistance, each of which specialized in a specific field to be improved in the new mechanics of 3.0. The development team expands thanks to the collaborations of Ninja Theory (Enslaved, DmC, Hellblade), Sumo Digital (Sonic & Sega All-Star Racing, Little Big Planet 3), Gobo studio (who have been collaborating with Avalanche since the first chapter) e United Front Games (Sleeping Dogs, Tomb Raider: Definitive Edition) and improves many small flaws highlighted by critics and audiences in recent years. Starting from a renewed combat system (which we will analyze in more detail later in the section dedicated to the Twilight of the Republic) to new driving mechanics, the gameplay of 3.0 is further renewed, expanding the already multiple possibilities of the first two chapters.
Among these improvements, the one that stands out most is certainly the sword fighting system designed by Ninja Theory, which at first glance might seem exclusive only to the characters of Star Wars, but which by assigning a white weapon to one of the Disney figurines the will promptly transform into a Jedi Knight (without Force though).
All the miniatures of the first two editions and the special discs can be used in the Toy Box and in the levels of the editor, except for the blue discs (the minigames of 2.0) which will only unlock tools for the Toy Box but will no longer be playable ( do not worry, they have been adequately replaced - but we will get there in due course) and obviously the old play sets that will unlock the collection related to the world they belong to, but which cannot be re-addressed. The Disney Infinity 3.0 portal is identical to the past (USB connection included) and compatible with all versions, as long as you have the game disc.

Disney Infinity 3.0 is not only improved in gameplay but also in the Toy Box, strength and weakness of the series, almost completely revised, adding new creation gadgets and further expanding the materials and objects that can be used to create your own levels. The objects are once again collected in precise and vast menus to be explored, with the addition of being able to create an ad hoc one with those you prefer to have them immediately at hand. As was the case with 2.0, all levels of the previous versions of Disney Infinity are compatible with 3.0, also offering n 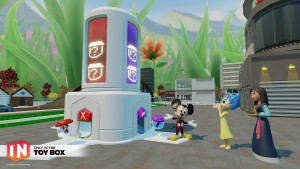 new players the chance to enjoy worlds that are uploaded weekly by the best developers and users. Among the new objects, the toy dispenser, a huge tower that will randomly release a gashapon containing one of the toys from past editions previously available in disc form or virtual only (including exclusive ones like Uncle Scrooge's Number One or the Sorcerer's Apprentice Hat). Welcome returns also for the builders, toys with features of Disney characters able to automatically create levels, tracks and any pastime on behalf of the player, whether they are lazy or simply not good at using the editor; and of Interior, the customizable house in rooms and furnishings that had been introduced with the second chapter.
The Toy Box is even larger and richer compared to previous versions, leaving more and more space for the promotional message that has accompanied Disney Infinity for three years "The only limit is the imagination", even if memorizing the use of all the gadgets and all the functions will require a good amount of memory and above all a lot of patience. Long tutorials have become optional, but very often the Magic wand (especially when trying to create an effect) is unclear e not very user friendly, forcing the player to try again several times or to rely on the randomness of the Builders.

We have added something

After confirming the improvements to previous versions, it's fair to talk about what's new in Toy-Box 3.0, starting withToy Box Hub, a real starting point once you have started the title and completed the prologue. The Hub rearranges the messy tutorials of the previous chapters, dividing the basic surface of the Toy-Box into specific sectors: we will thus have the sector dedicated to driving, the one dedicated to platformers, battles, the aforementioned INTERIORS, the community and finally the new one. function of the Friends. The player will therefore be able to choose what to try, in the order he prefers, facing the specific challenges of each area: in the Platform sector, for example, we will find a new version of the dungeon seen in the special blue discs of 2.0, and in the same way we will be able to face the hordes of enemies similar to the Asgardian ones in the part dedicated to the fight. Two special tokens were also released, sold separately, which we offer 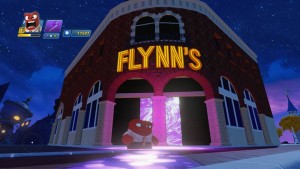 ono vehicle challenges (Speedway) and combat challenges (Takeover).
In the Community sector, where you can try your hand at building your level, or visit the Halls of Heroes and admire your collection of figurines and records as in the past, two new facilities have been added: the cinema El Capitan where you can watch movies created by Avalanche Studios or other players' levels e the Flynn Arcade, directly from the Tron movies, in which for the first time you will be able to play online in the levels of the Toy Box with unknown people, a further addition to the already infinite longevity of the sand-box.


You have a friend in me

The big news introduced by the Games Hub is the Friends system, seen in part in the blue disc of the Dungeon Crawler version 2.0 and further enhanced this year. After a short tutorial 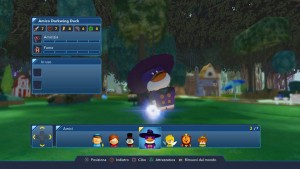 you can call a deformed character to your side, who will help you in the exploration and missions of the Toy Box: these friends have the features of Disney heroes like Robin Hood e Darkwing Duck, but there are also Marvel characters like Vision and Star Wars like Mace Windu (also available in its “normal” form on a power disc sold separately) and they will fight alongside your miniature just as if they were a second player. Friends have their own stats and can be equipped with weapons (both physic 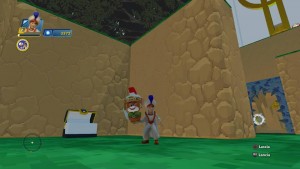 he that fires) and hats that will give them extra bonuses: feeding them with the food that you will find scattered in the levels of the Toy Box, you can upgrade them and make them real
War machines. You can also entrust your friends with a field to cultivate which, if it bears fruit, will fill your inventory with food and blue sparks (the game currency). The Friend is the natural evolution of the Disney Infinity 2.0 Helper, and is the perfect solution for those players who have no friends to play with in their living room, or who do not want to play online games at the Flynn's Arcade.

Disney Infinity 3.0 also re-proposes all its characters in the form of toys, with a character design that is well suited both to the new Pixar entries of Inside Out, and to Quorra of Tron Legacy, but which also manages to make the Star Wars characters truthful using a graphic renewal very similar to that seen in the new Rebels series (of which the cast is available for the 'purchase). Unfortunately, there are some technical defects already encountered in the past, such as late loaded textures and some occasional frame drops in the Toy Box, but nothing transcendental or that muddies too much the experience of the little ones. 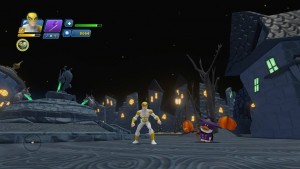 Being dedicated precisely to the youngest, the title is completely translated into Spanish, using the voice actors (where possible) of the characters seen in action in the films and in the various cartoons to which they belong. the adaptation of some tutorials which is not very clear in the actions to be taken, damaging the gaming experience (especially the driving one).
The Toy Box soundtrack repeats the old songs, but it is possible to enter the music of the Star Wars films by collecting the related toys.
Nothing to say about the miniatures this year too, perfect even in the smallest detail and among the best on the market with an even higher manufacturing than the previous collections, the figurines become not only Toys to Life but also real collectibles.

1 2
Do you want to be a video game expert and know all the tricks, guides and reviews for your video games ? Holygamerz.com is a group of video game fanatics who want to inform you about the best tricks, guides and tips. We offer you the best information to be a reference in gaming, so here you can find guides, tricks, secrets and tips so you can enjoy your games to the fullest. Are you ready to get all the achievements of that game that you resist so much? Enter now and enjoy your favorite video game to the fullest!
Guides How to find the GO Rocket team and defeat Sierra, Arlo, Cliff ❯