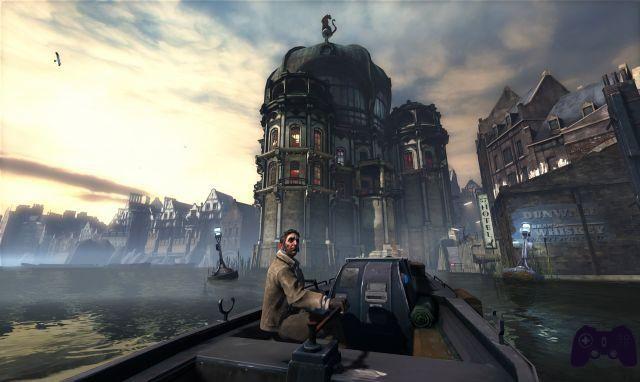 In a white and borderless environment, located halfway between dream and reality, an entity escapes the passage of time by watching over the world of humans. His ethereal gaze has long since rested on the figure of a man, an inmate of the Coldridge prison.
"Crow ..." he murmurs to himself "... you really are an interesting person: I am older than the stones on which your empire was founded and I read the fate of people as easily as a whale swims in the vast ocean, however with you it has always been different.
You had a chance to change your destiny, but your loyalty to the empress limited you, always making you go the best way to the empire, making you predictable and uninteresting, but now everything has changed! The blame for the death of the empress has been placed on you, the legitimate heir to the throne is dispersed and the entire order of the city has been subverted by the epidemic and the weeping ... just a nice stage to perform on, you can't find Corvo ? "

Suddenly a cloud of black smoke appears in this empty world, and quickly assumes human form, while the silent dialogue continues: "Stripped of your honor and thirsty for revenge, perhaps now you are ready for my gift ..."

For the uninitiated, Steampunk is a narrative vein in which more modern technologies are anachronistically inserted within a historical setting, often of the nineteenth century, powered by steam (steam, in English). In the subtitle of this paragraph I wanted to take up this term by modifying it with what is precisely the most important element in the world of Dishonored: Whale Oil.
This important element in fact enhances any equipment present in the game, from simple elevators to the most complex walls of light, which detect the electromagnetic field emitted by people and are able to distinguish between authorized and non-authorized persons, "frying" and instantly transforming these into ashes. latest.


All these elements have been cleverly introduced by the boys of Arkane Studios in the complex setting in which the game takes place: the Gristol Island of the Empire of the Isles, and more precisely its capital: Dunwall.

Freely inspired by the style of Victorian England, and with several references to the city of London (Kaldwin's Bridge in the first place), this city impresses with its original design and its unhealthy atmosphere of decay. It can also be explored in 3 dimensions, and this complex structure of alleys, houses and roofs that forms the city has been further enriched with collectibles, such as runes and bone amulets - which enhance the protagonist - or documents capable of making us known. better the history of the city and even important information about the current mission.

Obviously, the exploration of the city is not without dangers, and we will find ourselves facing, in addition to the various defensive measures, also various types of enemies, from the unfortunate victims of the plague called "weeping" to the dangerous Tallboy, the guards armed with bows with arrows. explosive and equipped with long stilts, to which they owe their name. Looking into the chaos of the city, however, we might notice excerpts from everyday life, which show us how normal people try their best to survive. The fine agglomeration of these elements makes the city, despite the fantasy setting, extremely realistic.

Crow and the Mark of the Outsider

Corvo Attano, former Royal Protector, after having helplessly witnessed the murder of the empress before his eyes, fails to prevent the kidnapping of his legitimate heir, and is left alone to suffer the false accusation of treason and murder.


Freed from captivity thanks to a group of loyalists, the same night from the escape he meets in a dream the mysterious figure of "the Outsider", a kind of divinity who decides to give Corvo access to his powers. From this moment the protagonist, using the mark on his left hand, will be able to use different spells, first of all the possibility of making a leap that instantly transfers him to a short distance.

Through the use of some special runes it will be possible to obtain other abilities, such as slowing down time, activating a dark vision capable of perceiving other entities through walls or physically possessing animals or even other people.

The right hand, on the other hand, is used to attack or defend with the sword.

As a further enhancement of the character, there are then some bone amulets, able to vary its abilities. However, the usefulness of these accessories varies enormously, as some amulets are only useful when used in pairs, while others are extremely useful even alone. For example, recovering the amulet that increases the probability of finding white rats is of little use without the one that allows you to possess them longer than normal rats and / or without the possession ability. On the contrary, the amulet that increases mana by 20% or the one that makes it regenerate faster are very useful. Since only 26 (of the 36 available) can be recovered at each game, it is easy to guess that we could find ourselves facing two games with a very unbalanced trend.


Corvo will have to use his skills to wander around the various areas of the city in search of his targets, and right here the title expresses its potential to the fullest. giving the game a great freedom of exploration and a large number of paths to follow to move through the city. This great choice increases replayability, as it stimulates you to discover all the various access routes, which change according to the upgrades acquired in the current game.

Once we reach the target area, the game will give us a choice: whether to simply kill the target or get rid of him using intrigues and tricks, an option that will allow us to continue without unduly destabilizing the already precarious order of the city.

But it's not just these aspects that have an effect on Dunwall: any corpse left unattended will eventually attract rats, which by feeding on the corpse will proliferate and spread the disease more and more, extinguishing hope in people's hearts and ensuring that the city is always darker and condemned to a sad fate.

Many inspirations, and all good

Dishonored is a game that offers no substantial novelties. It seems that the developers have taken and tried to amalgamate elements of other games without however resulting in a clone: ​​the final result rewards their efforts.

The game system with one hand for spells and the other for weapons is very reminiscent of Bioshock (not forgetting Dark Messiah of Might and Magic), the stealth style brings to mind games like Thief, exploration and free will pays homage Deus Ex ... in short, all titles of great depth, from which the developers have managed to extract an adventure that, if played with an adequately stealthy style, can keep us busy for a dozen hours and maybe more, because it still leaves room for a decent replayability.

Verdict 9/10 The Steampunk side of Deus Ex Comment Thanks to the variety of options offered, Dishonored presents itself as one of the most mature titles in circulation, thanks also to the excellent setting, which if explored enough will thrill you with a depth worthy of a GDR. Undoubtedly a great first-person Action Stealth. Pros and cons ✓ The stealth approach is well handled and rewards the player for making few kills
✓ Freedom of exploration and choice of how to behave satisfies the player
✓ The sceneries, the design and the curated history of this world give an enormous depth to the city, and make it feel alive under the centuries of history that it carries behind. x Graphically it is slightly behind for a title of this level
x The weapons are not very varied and the fighting relatively simple
Do you want to be a video game expert and know all the tricks, guides and reviews for your video games ? Holygamerz.com is a group of video game fanatics who want to inform you about the best tricks, guides and tips. We offer you the best information to be a reference in gaming, so here you can find guides, tricks, secrets and tips so you can enjoy your games to the fullest. Are you ready to get all the achievements of that game that you resist so much? Enter now and enjoy your favorite video game to the fullest!
Hyrule Warriors Review ❯