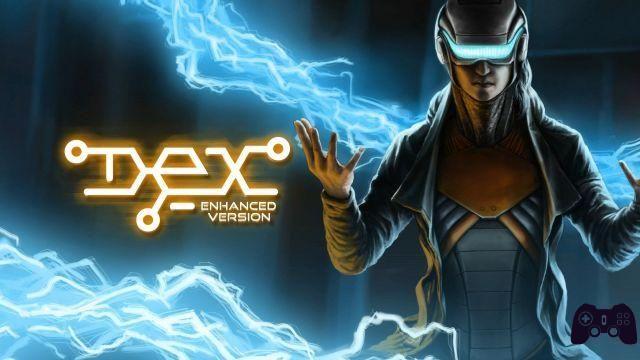 It happens more and more frequently to find on the shelves, digital or physical, revised and corrected versions of titles with a few years behind them. From the various "Final Mix" editions of Kingdom Hearts (recently released from Japan thanks to the HD Remixes of the series) to the more or less clever remastered for the current generation consoles, the propensity to try to improve their product and package a " Director's Cut ”is not a new phenomenon for the industry. And it is with this idea that Dreadlocks continued to work on the original Dex until you get to his Enhanced Edition, available for a few days also on PS4 and Xbox One. Let's find out if it was worth it.

Dex immerses the player in that near future typical of the fictional works of the early 80s and 90s, painting (by hand) the despotic and Cyberpunk colors of Harbor Prime, the fictional town that is the backdrop to the events. The protagonist of the experience is obviously Dex, a seemingly normal girl who is however hunted by the Complex, an organization that in the shadows controls all the main corporations and which for some reason intends to eliminate the woman and all those who get in the way. . After a daring escape thanks to the intervention of the mysterious Raycast and the help of the "retired" hacker Decker, the time for training and counterattack will come.

Dex is a cyberpunk product up to the matrix

It is not enough to insert some Zaibatsu and a handful of "code gunslingers" to be able to talk about Cyberpunk. Fortunately, Dreadlocks has shown that he knows it well and Dex is therefore able to deal with themes (and to create settings) typical of the genre conceived by William Gibson: from the classic ethical dilemma on technological grafts in the human body to the control of corporations and the war between these giants and hackers, both the main line and the secondary missions demonstrate that they have done their homework and go to pluck the right strings, proposing meanwhile, a series of typical settings for the genre (for example, with a nod to oriental culture) and showing a cross-section of life in Harbor Prime that is quite “dirty” and rough, not forgetting shady trafficking and activities bordering on lawfulness. The secondary missions then are practically never parallel stories to the events narrated, but are instead directly connected to this (and, above all, between them) going to form a sort of unique "narrative corpus" which allows you to deepen the details behind what is happening on the screen and which will lead to one of the three possible endings of the work. The only flaw (narrative) concerns this last aspect, or at least one of these: without wanting to deprive the reader of the pleasure of discovery, we limit ourselves to saying that one of the three epilogues is too cryptic and not very detailed, a trip of kaleidoscopic colors with cold hues and images with a strobe effect that, however, leaves nothing with a finished effect.

From a playful point of view, Dex synchronizes on a frequency somewhere between the two-dimensional action game and the RPG, stealing some tints from the platformer and dedicating some attention to exploration (with a final result that approaches under different wait at Metroidvania). At first, like Dex, the player will be confused and intimidated by the game world, given that in the guise of the girl, if one excludes the ability to connect directly to cyberspace without resorting to any equipment, she is in fact a normal human being without enhancements, a "Only flesh-and-blood" (according to the in-game definition ). The basic skills of the girl consist of the ability to jump and a two-hit punch combo, as well as the ability to parry to zero physical damage (but not that caused by firearms). In short, in the early stages, rather than facing enemies openly, it is better to try to catch them from behind, since it is possible to eliminate them silently (their companions, however, will become suspicious at the sight of the body) if you can get around them. Even the aforementioned skills of interfacing with cyberspace at the beginning are quite embryonic: with a click on the left stick it is possible to connect to the network, being able on the card to "crack" the electronic devices in the field (turrets and cameras) or, by purchasing upgrades, enemies directly, paralyzing them for a few seconds. In reality, however, every time the "hacking" phase begins (where you have to keep the icon representing the virtualized version of Dex above the target) you are targeted by viruses and other defense systems, which in case of damage will lower the girl's focus until it drops to zero (causing damage of 50 health points). With the focus reset it will be impossible to connect to the network, and you will have to wait for the auto-regeneration of the bar (up to its 25%) or use objects to replenish the indicator.

The gameplay is undoubtedly good; after a certain point, however, the challenge is lost a bit

However, as you advance and level up, you gain confidence: at each level up, in fact, skill points will be awarded to be spent to enhance the characteristics of Dex, ranging from his ability to haggle with various shopkeepers to his skills with firearms and melee (as well as with some aspects related to cyberspace). If before it was a problem just going from point a to point b, the more you play (and in the role of) Dex, the more natural it becomes to devote yourself to secondary missions or simply to explore the various areas of the map., becoming a more skilled assassin or a stronger fighter. The aspect then explodes definitively once it becomes possible to install the cybernetic grafts present in the game by occupying the available slots (being careful, since once you have chosen a module you can no longer go back). Enhanced jumps that allow you to reach unexplored areas, immunity to toxic fumes or electrical attacks that allow you to visit the improbable undergrowth of Harbor Prime, modules that improve attack capacity, stamina or even the possibility, using consumable equipment, to make himself invisible to enemies for eight seconds. Even the experience in cyberspace, where the mechanics resume those of the twin stick shooter (especially when it comes to infiltrating some servers, where the enemies are much more varied and threatening than the red "searching" viruses that defend physical enemies from hacking) progresses, since it is possible to install and upgrade alternative programs for the secondary fire mode: you start relying only on the Dardo, an energy bullet capable of piercing the defenses but linear and very expensive in terms of energy (which is reload gradually), but later in the game you can get your hands on software like the Spammer (which temporarily blocks cyber enemies) and a very useful arc attack, with a shorter but wider range. The difficulty curve at this point tries to intervene by proposing some more powerful alternative enemy, the armored soldiers in the real world (more tough and impossible to eliminate in a stealth way) and in the virtual one, with shuttles equipped with shields, black holes and other programs. from patterns harder to predict, but the feeling is that anyway a well-equipped Dex can do practically what it wants by finding an opposition no longer at its height (except in the phases, close to the finale, in which it is "disarmed" and deprived of its grafts). A shame, because as said the title from the point of view of the story lets itself be played and the playful system, while not inventing anything, certainly invites you to visit Harbor Prime and discover its secrets, which inevitably translates into completing the various proposed secondary missions.

An ICE too strong

From a performance standpoint, Dex is quite subdued

But it is not the difficulty curve, unfortunately, the only discordant note of the production, but the technical performance: if in fact visually the title perfectly captures the atmosphere of the Cyberpunk trend and proposes scenarios (completely hand-drawn) that are truly convincing and suitable for title tone, Dex clamorously sticks when you go to analyze the technical aspect. It happens too often that the game freezes to restart several moments later, or that (especially in phases in Cyberspace) the screen goes dark and the icon gets "stuck" in a wall forcing the player to reload the checkpoint (fortunately, the game saves at each change of zone), wasting time and progress made in the meantime. And there are also some localization problems, with texts on average complete but which occur in slips due to a hasty translation or in untranslated parts (such as the indication to go back in the menu, which remained “Back” as in the original English). This is, in our opinion, the most striking defect of Dex, the one that irremediably marks the difference between a good title with some problems and a must-have to be recommended hands down, condemning the work of Dreadlocks to live in a dimension that surely it is close to the whole production, waiting for some posthumous patch that will put a patch on these problems.

Verdict 7/10 We need an Enhanced Edition + Comment Summing up Dex is certainly not an easy task. On the one hand, there is the desire to reward a more than satisfactory play system and, above all, the mood of a production that has not used the term "Cyberpunk" lightly but has grasped, and re-proposed with a certain skill, the salient features. On the other hand, there is that series of defects that jeopardize its final success, especially by analyzing the work of Dreadlocks from a technical point of view, which hinders and makes the (successful) artistic direction given to everything much more opaque. In the end, so many regrets too many that despite everything do not completely cancel the positive feelings left by Dex, waiting for a patch that corrects the shot. Pros and cons ✓ Cyberpunk to the bone
✓ Very solid gameplay
✓ Artistically inspired ... x ... But too many performance problems
x The challenge fails after a while
x A final in three too hasty
Do you want to be a video game expert and know all the tricks, guides and reviews for your video games ? Holygamerz.com is a group of video game fanatics who want to inform you about the best tricks, guides and tips. We offer you the best information to be a reference in gaming, so here you can find guides, tricks, secrets and tips so you can enjoy your games to the fullest. Are you ready to get all the achievements of that game that you resist so much? Enter now and enjoy your favorite video game to the fullest!
Xenoblade Chronicles X Review ❯