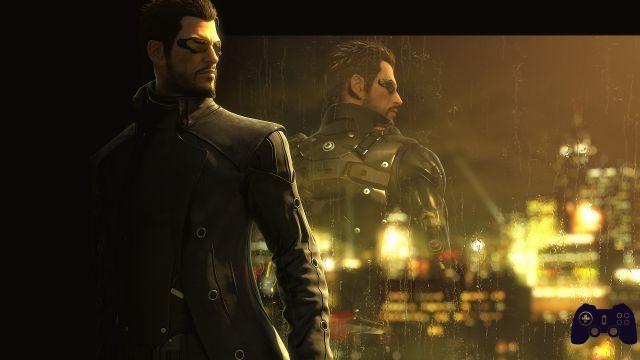 We are now in 2027 and if someone had told me just five years ago that I would end up becoming the head of security for Sarif, I probably would have laughed in their face. I, Adam Jensen, head of security of a leading industry in the production of cybernetic prostheses ... If it wasn't for that incapable of my superior I would still be in SWAT doing my duty, and if it wasn't for Megan, or rather the renowned Megan Reed, I'd probably still be looking for a job. I am not proud that my name was suggested by Megan, but I am determined to do my best to show Mr. Sarif that his trust is well placed.
Megan warns me that she is almost ready to leave, today I have to accompany her to a conference where she will announce to the world that I am about to make a sensational scientific discovery and I will have to pay attention to the numerous movements that consider "human enhancement" an unnatural practice and sometimes even blasphemous. I'm not sure which side to take, I know for a fact that the enhanced parts can give superhuman abilities, but I would never give up my natural limb, especially considering that I would have to take anti-rejection drugs for the rest of my life. Megan is ready, it's time to leave ...

The human revolution before Deus Ex

Deus Ex: Human Revolution is the prequel to the very famous Deus Ex developed by Ion Storm in 2000, which was followed, without as much success, Invisible War in 2004. In fact, it is noticeable immediately how all references to nanomachines have been removed from the upgrades that can be acquired ( probably a technology developed after 2027) and how, despite the game being set in the future, compared to the first Deux Ex the cities, the settings and the “cultural” style still maintain a more contemporary look.

Humans to be reviewed

Still regarding the upgrades, instead of being modules capable of instructing the nanomachines present in the body, sometimes to be found in the game maps or as a reward for some missions, in this game you start with all the upgrades already available in your body and only when our body is ready to activate these features, will we be allowed to make full use of our capabilities. In terms of gameplay this translates into acquiring 5.000 experience points or using a Praxis Kit capable of forcibly unlocking one of these upgrades.
The upgrades can be divided into 5 categories: Social, Combat (improved aim and damage resistance), Stealth (invisibility and silent movement), Hacking (analysis and hacking turrets) and Exploration (breaking through walls and lasting run). I have not cited any example for social hacking for the simple fact that there is only one enhancement in this regard, a kit capable of analyzing the interlocutor and referring character elements to us and influencing them with pheromones.
Precisely the fact that there is only one social enhancement highlights what is a weak point of this Deus Ex compared to the first one, of which I will never cease to mention as an example of excellent interaction also on the social level the orphan child near the distributor of the second mission of Deus Ex, which if treated well reported having seen men type a code to the machine before disappearing behind it, and when you tried to enter the code given by the child behind the machine a secret passage was opened containing bonus objects .
All this interaction between the player and "civilians" is absolutely not present, and the only way to obtain codes is limited to reading e-mails and PDAs (quite useless, because usually even if you have the code, you tend to hack anyway the device to get experience points).

Do not fu * k the (gameplay) system

Speaking of the game system of this latest iteration of Deus Ex, the lore of the series is not disappointed. DE: HR features a mostly first-person shot, which changes to third when we decide to crawl along a wall or piece of furniture to get coverage or to peek around a corner. During the storyline the player will be called to carry out a series of missions, all surrounded by optional quests ranging from simple commission to real infiltrations.
The style of the shootings is more or less that of an FPS, but the high damage of the enemy's bullets discourages the use of the tactic "break through the wall and shoot everyone", preferring the classic stealth approach, in fact fills us with empowerment possibilities.
A great combination with the stealth style is necessarily the improvement of hacking skills, which allows us to disable cameras and unlock doors that we would otherwise have to bypass.

Hacking sessions are nothing more than a minigame which consists of trying to reach backdoors through various intermediate nodes: for each node touched there is a possibility that the system will notice the intrusion and start a scan, starting from its own point of access and looking for our. The purpose of the minigame is therefore to reach all the backdoors before being surprised and expelled from the system. All accentuated by the possibility of accessing external archives to obtain bonuses such as experience, money, nuke (anti-detection software) and worms (software that block the tracing of the computer), the possibility of reinforcing their nodes to mislead the tracing of a few seconds and so on, all in real time, alternating between the activation of two new nodes and the reinforcement of another three trying to dart with the controller from one node to another before the efficient centering computer reaches our point of access.
In short, an excellent "little game" capable of damaging as well as giving discreet satisfactions. A great job from Eidos.

Too strong even for the enemies of the future (?)

Until you are discovered, the AI ​​of the guards is limited to the obvious: unless they see (or hear) something suspicious, they will continue a steady patrol, without even noticing that the other 4 sentries in the room have disappeared into thin air. Personally, I would have expected throughout the game at least a dozen guards in pairs who at some point along their path waved to each other to say that everything was okay, and even some guards that every few minutes had to report to the base via radio. Such a pity.
The AI ​​does not excel even after being discovered, the enemies - while taking advantage of cover - are not organized and unless you are in the wrong place it is easy to get away with simply coming out into the open to shoot and then take cover behind cover until health she won't have regenerated enough to lean out again to kill another enemy.
While the AI ​​of the bosses is better and is customized to their abilities and character, the lack of precise strategies, combat phases and interaction makes it lose a lot of the emphasis of the fight.

Verdict 8/10 The beginning of an epic adventure Comment Despite some imperfections, Deus Ex: Human Revolution represents for quality, longevity and playability a product capable of satisfying the needs of long-time fans of a historical saga like that of Deus Ex and of those who want to live a satisfying and unique gaming experience. Pros and cons ✓ Gorgeous cyberpunk setting
✓ Exciting hacking minigame
✓ A worthy Deus Ex x Poor enemy AI
x Dated graphics, however stylish
x Energy management to be improved
Do you want to be a video game expert and know all the tricks, guides and reviews for your video games ? Holygamerz.com is a group of video game fanatics who want to inform you about the best tricks, guides and tips. We offer you the best information to be a reference in gaming, so here you can find guides, tricks, secrets and tips so you can enjoy your games to the fullest. Are you ready to get all the achievements of that game that you resist so much? Enter now and enjoy your favorite video game to the fullest!
News Disgaea 1 Complete available today on Switch and PS4 ❯

Psychonauts in the Rhombus of Ruin review