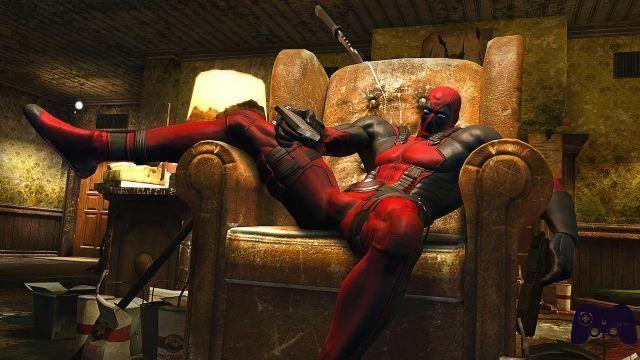 Activision has accustomed us, over the years, to various superhero licensed titles, including the numerous games starring Spider-Man. This year, the friendly neighborhood Spider-Man is taking a break (except for the Ultimate Edition of The Amazing SpiderMan for Wii U) and giving way to a new “hero”: Deadpool.

???: Hey! Why did you put the quotes when you wrote Hero?

Guido: Well, technically you are not, you are a mercenary, ergo go where the money takes you ... Now sit down and let me finish the article, the deadline is looming for this preview.

Deadpool: Do you think so low of me? You know who I am and what I do for a living, right ?! I'll show you how to write a Preview!

Guido: Okay, write it yourself then. Remember to thank Activision Blizzard for inviting us…

Deadpool: Yeah yeah, okay, the usual shit that that idiot who calls himself "Irresponsible Director", or whatever his name is, tells you to write every time. Now disappear, I'll call you when I'm done.

Deadpool: So, let's stop splitting the who-says-what phrases that make a lot of trashy fiction first. What then, I like trash a bang. Anyway, how is it that you start writing a preview of a video game? But look at you if, among other things, I also have to write the preview myself to prevent any child, maybe short, squat and pimply, from writing some shit in a language that I don't even know just to say d ' be a video game critic ... Anyway, let's see, the preview of MY video game ...

- HERE STARTS THE EPIC PREVIEW OF THE EPIC DEADPOOL GAME -

Hi Reader, this is the great Deadpool writing for you (so, feel honored, ndDeadpool ... How cool to write "Deadpool note"!): I want to give you a preview of that phantasmagoric video game coming out on June 28 2013 su PlayStation 3, Xbox 360 e PC. But what do I tell you to do, you will surely have already booked it, right? True? TRUE?!?
I said, I'm here on Matt's Games Holygamerz sitarello, which is already a lot if it manages to get a handful of visits a month, to show you the main features of my game, developed thanks to those nerds at High Moon Studios. Hey, who the hell censored shit? What then in the game I say much worse! Hey!

Okay, I guess if I want to write I have to try to use an appropriate language, so I won't say shit anymore, you got the shit about Matt's Games Holygamerz! Even if, to tell the truth, I have to admit that I have met some smart people while wandering around the editorial staff of this site. But oh, there's not a hair of pussy to pay for it. They will be good at their job but how do they get by without having some nice tricks in the office ...
Returning to High Moon Studios, you will surely remember them for the last two licensed games dedicated to Transformers, which were great action but will not arrive at all to the masterpiece you will have in your hands next June.


How a game about Me is born

Since Marvel was not willing to give me a game of my own, just think of the secondary role that they gave me in X-Men Legends 2 or in Marvel: The Great Alliance (both the first and the second, there is just no respect for the heroes, ndMe ... No, better ndeadpool), I took my savings - or rather my earnings - and I went to High Moon Studios, I showed Peter Della Penna my explosive personality, he wasted no time there and he sent me a script for my game right away.
A script? Are we crazy? I already have the voices in my head, all we need is someone else to tell me what to do! Cut here, edit there, add a couple of nice big boules there, and I've created a great game.
Player, trust us. We will change your life, videogame or not!
While you impersonate me, there will be jokes and references to the universe in which I live, with noteworthy supporting actors and again noteworthy bowls (oh Domino, I miss you so much! <3); obviously I will interfere in your choices most of the time, piercing what you mere mortals call the "fourth wall" or whatever it's called ... Sorry eh, you're using my face to have fun, it's the least I can do!
Hey, have you noticed that I haven't written a bad word in almost ten lines? In your face, fuck!
I don't want to spoil anything about the plot of my epic game, I know that on the Internet you are all ready for the easy insult, a bit like me, so I don't even try to tell you that the first mission will concern Chance Mance, a fat mafia with an almost infinite army of idiots, which I will have to bring back alive for the sake of ... Oops, I did it again!

Do you know what happens if you mix C4 with burritos?

No, I will not answer this rhetorical question, everyone has to try it alone, at home, perhaps between a pancake and a chimichanga, or you can wait until June 28 and try it on my beautiful body with a regenerating factor. Yes "regenerating" because, a bit like what happened in Wolverine's game (which then, I still have to understand what the other one did to have a game all about him without moving a finger ...) a second before you will see me almost quartered and a few moments later, once my energy returns more explosive than before, I will be as beautiful, “healthy” and “clean” as at the beginning of the game! (Oh, how I love using quotes!)
In my game, you will find everything, from hack n 'slash to third person shooter, complete with upgrades that can be purchased with special DP coins, and no, I'm not self-centered. Coins will be dropped by all defeated enemies; the more combos you accumulate, noob, the more coins you will get as a reward. Sounds logical to me, doesn't it? And what are you going to do with my coins? Simple: you will buy me new weapons, in fact! Ah, little note: avoid taking the Shotgun, it's just like losers.
Also you can combine my moves with swords (and with the vast arsenal that I put at your disposal) to slice any enemy that comes in front of you. Environmental objects, on the other hand, no, they did me nothing, so I will not destroy them, just as my robot friends in previous games of High Moon Studios did not destroy them ... For this time I will only destroy glass and windows and the faces of the poor unfortunates who will face me.
Oh yeah, remember the teleportation belt my good friend Cable gave me back in the day? There is also that and will allow you to dodge and counterattack enemy attacks, teleporting you around the level! Real cool, right? Fluid and varied gameplay with lots of multiple combos, everything you geeks like! All this thanks to ME, not to those four bespectacled salamons of High Moon.
Finally, I thought of three different difficulties with which you can start the game: whether you are a noob or an expert in the genre, you will find bread for your teeth. In addition to the main story, then, you can try your hand at side challenges to kill time (but not just that? Ha ha ha!) As real patients and for pure hardcore players!

In short, to put an end to it, admitted and not granted that I am bothering to waste time for you for a moment, in My Game there is everything a loser like you needs to further isolate himself from society. So please take care of MY pockets and buy MY Game!

Comment So Reader, have I convinced you? You would have bought it anyway, because I will personally come and beat you (or worse) if you don't buy a copy of Deadpool on June 28th. Having said that, I close, I have a craving for chimichanga and a porn movie. ~ ~ ~ Guido Avitabile: Oh, he's finally gone and I can finally have my say on the game ... How? Are we already at the final comment? And what the hell ... Okay, I'll try to summarize my thoughts in two lines. High Moon Studios continues to amaze: after giving us two enjoyable Transformers games, it presents Deadpool, which we are sure will be able to conquer many people with its madness, and not just comic lovers. The undersigned craves the full game, which has managed to convince him after an initial skepticism. One more note. We sincerely hope that this particular preview will make you seriously ponder the purchase of what promises to be one of the best licensed titles of the year, both for design and technical merits: when is June 28th coming? Pros and cons ✓ Everything is MY Game
✓ Chimichanga!
✓ Lots of weapons and lots of boobs! Do I need to say more? x Nothing, it's perfect!
Do you want to be a video game expert and know all the tricks, guides and reviews for your video games ? Holygamerz.com is a group of video game fanatics who want to inform you about the best tricks, guides and tips. We offer you the best information to be a reference in gaming, so here you can find guides, tricks, secrets and tips so you can enjoy your games to the fullest. Are you ready to get all the achievements of that game that you resist so much? Enter now and enjoy your favorite video game to the fullest!
Mad Max preview ❯