Day of the Tentacle Remastered review 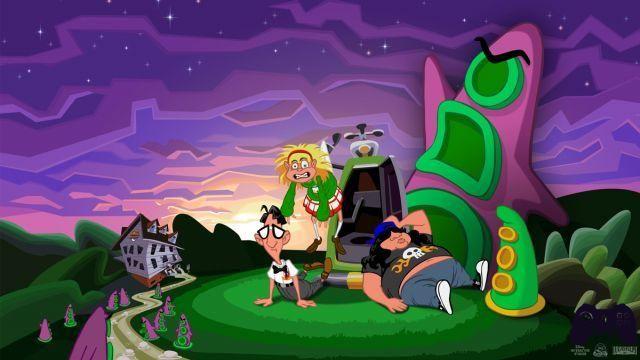 For many gamers, the story of graphic adventure is mostly made up of recent titles, from last year's award-winning Life is Strange, to the tide of episodic titles that TellTale seems to be churning out on and off with ups and downs. But if on the one hand the newcomers on the point & click fiction scene seem to be the masters, in recent years two of the old protagonists of the sector are slowly returning to the fore: sacred monsters like Tim Schafer and Sierra don't seem willing to give up the baton that easily, and if on the one hand we have seen in recent months the return of King Graham of Daventry, in the new saga of King's Quest, on the other hand the good Tim alternates novelty with remastered of the old glories.

After dealing with the Mexican atmosphere of the excellent Grim Fandango, Double Fine brings us back to the discovery of one of the blackest (and at the same time most pleasantly colored) days in the history of humanity: the day of the tentacle!

Arms stolen from agriculture to conquer the world

He's evil, power-hungry, and devoid of opposable thumbs. And it must be stopped. Yesterday.

If the premise seems decidedly bizarre to you, you have fully hit the spirit of Day of the Tentacle. Also known as Maniac Mansion 2, the title is a direct sequel to the 1987 classic LucasArts, and the latest in the company's history to take advantage of the verbal command interface. Picking up where the story left off six years earlier, we find again at the root of all the problems the bizarre Edison family, together with the two artificially created tentacles, Green and Purple.


The latter, after ingesting a chemical waste produced by Dr. Fred's machinery, becomes the main antagonist of the game (also thanks to the growth of two tiny arms and a criminal brain), and as the nerd Bernard, the metalhead Hoagie and the psychotic Laverne we will be called to travel in time to the previous day to stop the polluting car. Needless to say, Dr. Fred's car, after a malfunction, scatter the trio for the story, forcing the player to make use of the infamous Cron-o-binetti (chemical toilets capable of time travel) in order to return to the original floor.

From this sort of long background, it starts one of the most absurd titles even by the standards of the former LucasArts, which however hides a number of definitely clever puzzles, elaborate, and with a high rate of comedy, which push the player to think outside the box (even temporal) to arrive at a solution. 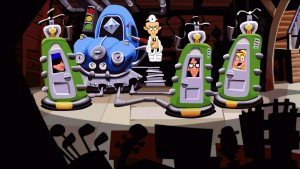 And you call this a clue ?!

From this point of view, the remastered edition it doesn't add much to the already winning original formula, simply including controller support, a switch capable of alternating between 1993 and high definition graphics, and a faster command wheel than the verbal interface (still present in the 1993 view, however). To this are added the now inevitable comments from the development team, which, led by Schafer, from time to time intervenes during the game with backstory and little comic curtains about the original production.


Such is the fidelity to the original, moreover, that of it there are even some small bugs, such as the time offset between subtitles and speech in certain animated sequences. In the same way, the puzzles have remained almost unchanged, including one particularly memorable and unclear, the result of a misunderstanding of the original designer. This absolute fidelity, however, is voluntary, as evidenced by both the audio comments (in which the developers themselves take note and apologize for the oversights of the original), and the Steam objectives. 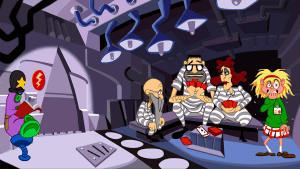 The difficult thing is to shoot without fingers ...

While not far from what has already been seen in Grim Fandango Remasterd, Day of the Tentacle Remastered unfortunately it suffers more in terms of "aging": although mediated by the wheel of commands, the original intricacy and inconvenience of the verbal interface is still felt, forcing the player to navigate through many useless commands and multiple redundant selections (ex: open / close-> door, equivalent to use-> door, combining two tools in the inventory equivalent to selecting use-> object-> with, and so on).

Fortunately these are not problems that are serious enough to completely undermine the gaming experience, and in some cases even contribute to generating small comic interludes due to the use of senseless commands for the context. It remains however an experience more suited to players who grew up during the golden age of graphic adventuresrather than those more accustomed to the automatic contextual interaction introduced in the 2000s. 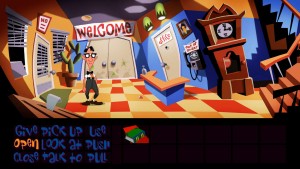 What's up my friend?

Even the graphic sector can be rather atypical to the eye of a modern player: composed of landscapes from an impossible perspective, extremely caricatured and colorful, Day of the Tentacle makes no secret of being inspired by Warner Bros animated shorts. Among the final thanks, therefore, also appears the name of Chuck Jones, historical director and animator of the Looney Tunes, from which Day of the Tentacle it also takes inspiration from the musical sector, mixing original themes with musical classics (for example, in a segment with Hoagie during the drafting of the American declaration of independence, it is possible to listen to the main theme superimposed on Yankee Doodle).

The dubbing, even after many years, remains of high quality, contributing both to the characterization of the characters and to the “cartoonish” atmosphere of the game. Unlike the remixed soundtrack, in fact, the vocal tracks are those of 23 years ago, properly cleaned; the same ones they made known Day of the Tentacle as one of the first titles to make use of full dubbing.

Verdict 7.5 / 10 Fortunately it is not a Japanese anime .... Comment Day of the Tentacle Remastered is the fourth in the recent series of HD transpositions of the great classics LucasArts, by Double Fine, and after the first two Monkey Island and Grim Fandango, Tim Schafer's formula seems to have consolidated by now. However, and all the more so in cases like this, where the original was a sort of "transition experiment" in several respects (from audio, to the mechanics of the puzzles that prevented total failure, to the same distribution format halfway between 'was floppy and CD-Rom), a more "targeted" cure would be advisable. A universal model of conversion, which makes fidelity to the base material its strong point is certainly appreciable, but in Day of the Tentacle the same base mechanics were in some cases particularly cumbersome, and in a title that often and willingly requires thinking Four-dimensionally (many puzzles are based on paradoxes and temporal changes), a greater work of chiseling and filing of superfluous aspects would have certainly been welcome. Removed this little pebble from the shoe, however, the game spins wonderfully, and in addition to leveraging the nostalgic aspect (which is most evident in Monkey Island and Grim Fandango), Day of the Tentacle has a healthy dose of comedy behind it. and nonsense that manages to get a laugh even after the hundredth time. A bit like the cartoons he is inspired by, and from which he proves to have learned his lesson perfectly. With one more cartridge already announced to fire (Full Throttle Remastered, unveiled at PlayStation Experience last December and slated for 2017), Double Fine proves once again that the era of classic adventures is far from dead. Pros and cons ✓ Creative and challenging puzzles
✓ Controller support also on PC
✓ Quality remixed soundtrack x Audio commentary sometimes superimposed on animated sequences
x Redundant interface elements
x Poor longevity

Do you want to be a video game expert and know all the tricks, guides and reviews for your video games ? Holygamerz.com is a group of video game fanatics who want to inform you about the best tricks, guides and tips. We offer you the best information to be a reference in gaming, so here you can find guides, tricks, secrets and tips so you can enjoy your games to the fullest. Are you ready to get all the achievements of that game that you resist so much? Enter now and enjoy your favorite video game to the fullest!
Darksiders Genesis review: don't call it diablolike ❯

Marble It Up! Review - The Super Mario Galaxy from Marble Madness

The Banner Saga 3 (Switch) Review - Even the greatest stories end

Add a comment from Day of the Tentacle Remastered review