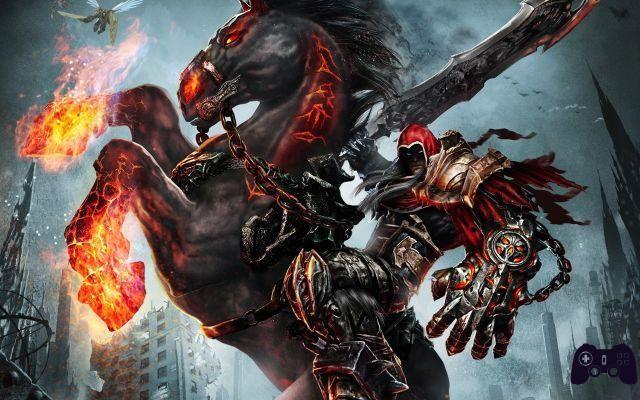 It was 2010 when THQ, whose presence was still notable on the gaming market, published the first chapter of a new franchise of the same name, Darksiders, that would leave its mark on the genre. Once again, THQ has proven to be able to create successful games, whatever the field considered, in this case that of Action / Adventure. Developed by Vigil Games, the brand set out to tell the story of the four Horsemen of the Apocalypse, whose task was to preserve the balance between the realms of Hell, Heaven and men.

It's time for war

The war between Heaven and Hell was raging more than ever when there'Arso Consiglio appointed four warriors, the Horsemen of the Apocalypse, to bring balance until man would be able to join the battle. Seven were the seals that kept the natural order of events stable, and the four fighters would be called only when the Seventh Seal was broken. The adventure in the role of War will begin in the present day, when the epic battle had begun again, where the hero will be summoned to Earth to restore balance. Here you will find that actually the Seventh Seal was intact and Guerra, recalled by the Council, will be imprisoned for a hundred years. Before being executed, he will be able to get an assignment to redeem himself: he will have to return to Earth to find out what really happened and then restore order. Following this first introduction, which will have the function of a tutorial, you will return to the world of men and, controlled by the Sentinel of the council, everything will begin. The ultimate enemy of War is the Destroyer, the creator of what happened to men and, fundamental in the course of history, will be some demons, who will grant you their help during the game, providing you with indications and objects. However, before reaching the Destroyer, it will be necessary to fight and eliminate four chosen demons, taking up a good part of the time necessary to finish the game.

In Darksiders, Action and Platform game parts will continuously alternate. In fact, before reaching and facing the various bosses, it will be necessary to complete sections with small puzzles, requiring you to climb walls, cross ravines, find objects, all with the aim of opening previously closed doors, which will gradually lead us towards the enemy on duty to defeat. However, the structure is quite simple and straightforward and the player will rarely find it difficult to understand how to move to the next area and, during the exploration, they will encounter various mini-bosses to defeat in order to proceed. The fights are not overly complicated due to easy to understand strategies. The mechanics are simple and intuitive, also thanks to the very easy to remember key mapping. The movement will be linked to the usual WASD, while the mouse is left with the task of attacking with one of the two equipped weapons and using specific objects, as well as managing the camera. As in any self-respecting Action game, it will be possible to jump, grab and throw objects, parry, dodge or sprint in one direction. On the other hand, it is very uncomfortable to focus on the single target, which moves the camera exclusively on the lens in question, making it difficult to observe what is around us or, even worse, behind us. Except for the weaker ones, with which it is possible to do it from the beginning, almost all the enemies and especially the bosses can be eliminated instantly by pressing the E key after inflicting a lot of damage on them, thus activating a small sequence during which the target will be brutally quartered. With each kill you will get three types of souls: green, which will restore your energy, yellow which will fill the I rage bar, necessary for the use of special abilities, and blue, which will constitute your bargaining chip with the Vulgrim demon. , from which it will be possible to buy new items and much more. Furthermore, always from Vulgrim it will be possible to teleport instantly between the various locations in which it appears, as long as they have already been visited. The weapons will level up with use, allowing the purchase of upgrades for the various combos. And again, for a short period of time, it will be possible to activate, with the V key, the Chaotic Form, during which War will be able to unleash more powerful attacks. It will also be possible to equip items to weapons in order to give them special bonuses.

The rather linear structure of the game is evident, particularly with regards to exploration. On the contrary, the plot as the game continues will have rather interesting and unexpected implications. As already mentioned, even the fights are not particularly difficult, at least as regards the "Normal" difficulty, and the strategies for taking down the bosses are easily understood. An obstacle, although of a psychological nature, is given by the absence of an energy bar for the latter, making it impossible to know how much is missing to conclude the fight. It was difficult to use some commands, such as those related to the use of various skills, which are inconvenient for those who play with mouse and keyboard rather than with a pad.

Every self-respecting warrior must know how to present himself

We tested the game with the maximum details and it is evident how, at the time, Darksiders were visually majestic, albeit with some defects. Whether we are talking about demons, angels, humans and so on, each character has been well designed and carefully studied in detail. On the other hand, the textures that make up the panorama are disappointing, which at times turn out to be excessively square, while at other times they are not loaded correctly, leading to some sporadic visual bugs. Some errors are also present on the polygonal models, for example when Guerra occasionally rises in the void during the combos, returning to the correct position as soon as the assault is concluded. The visual experience of Darksiders is however decidedly satisfying, also thanks to the post-apocalyptic settings in which it is set. Excellent is also the work of Cris Velasco, Mike Reagan and Scott Morton, the composers of the soundtrack of Darksiders. The music, in fact, gives a greater sense of epicness to the battles and to the game itself. The dubbing is also of considerable depth, with voices that appear to be more than adequate to their characters.

Verdict 8/10 It was better when it was worse Comment Years after its release, and despite the enormous competition suffered by chapters of the same genre that have solid success behind them, Darksiders remains a great title that everyone should play , lovers of the genre and not, which is perfectly able to keep up with competing titles, thanks to a remarkable plot and rather simple game mechanics that make it suitable for everyone, whether it is newbies to the genre, or experts . Pros and cons ✓ Intriguing plot
✓ Intuitive game mechanics
✓ Epic fights x Too simple on standard difficulty
x Sporadic audio / visual bugs
x Repetitive platform sections
Do you want to be a video game expert and know all the tricks, guides and reviews for your video games ? Holygamerz.com is a group of video game fanatics who want to inform you about the best tricks, guides and tips. We offer you the best information to be a reference in gaming, so here you can find guides, tricks, secrets and tips so you can enjoy your games to the fullest. Are you ready to get all the achievements of that game that you resist so much? Enter now and enjoy your favorite video game to the fullest!
Virginia review ❯

Until Dawn: Rush of Blood review

Temtem | The analysis of the PlayStation 5 version

Art of Rally review is pure poetry in motion